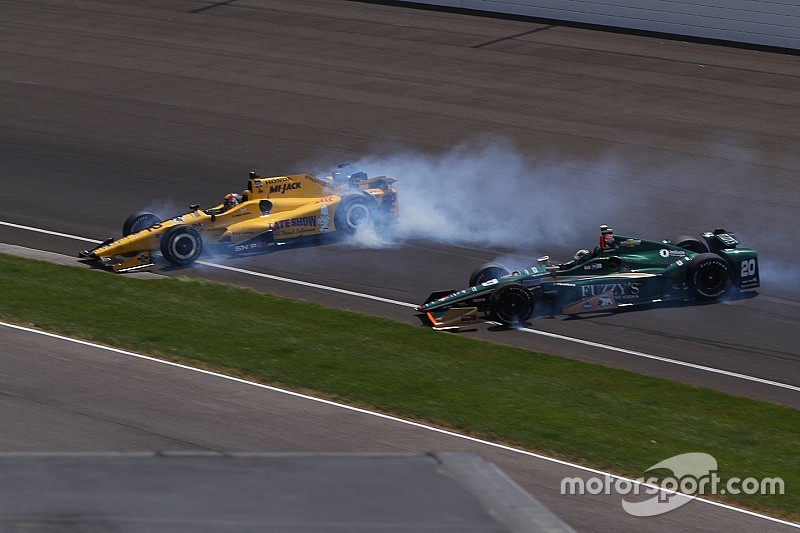 IndyCar series officials continue to take measures to avoid the kind of accidents we saw during Indianapolis 500 practice.

IndyCar officials have taken another step in the fight against flying cars with a new piece added to the superspeedway aero kits for this weekend. The changes are in reaction to the three cars that flipped completely over during Indianapolis 500 practice after spinning backwards into the wall.

The series announced Tuesday that they are implementing closure panels to the rear wheel guards on the superspeedway aero kits for both Chevrolet and Honda. Per a release from the series, the manufacturers themselves developed the panels for each of their machines.

There are three superspeedway races left on the 2015 schedule with Pocono, Auto Club, and this weekend's event at Texas Motor Speedway. Due to the higher speeds that are expected at Texas, series officials have also mandated that the rear wing angle for all cars at TMS must be between -6 and -10.5 degrees, resulting in an increase in overall downforce.

"This has been a collaborative effort with both manufacturers and they have been working on these since the Indianapolis 500 qualifications," said Will Phillips, INDYCAR Vice President of Technology. "These closure panels serve as a blocker so air cannot flow through the rear wheel guards. This will ultimately raise the point at which cars would experience lift when traveling backwards."

“I think they have found an effective way to reduce and eliminate the lift that they had problems with in practice at Indianapolis," said Texas Motor Speedway Eddie Gossage. "This is a logical approach to attacking this problem and hopefully we won’t see that here at Texas at all. I think this is a step in the right direction."

“IndyCar has also mandating a slight increase in the rear wing pitch and that will probably cause the cars to slow down just a little and I think that is a good move as well,” Gossage added. “That will also make the cars more drivable. We are pleased IndyCar is working on this. We don’t know what these changes will bring until the green flag drops, but IndyCar is trying and we appreciate that.”

Aero kit conundrum: Is it being dealt with correctly?