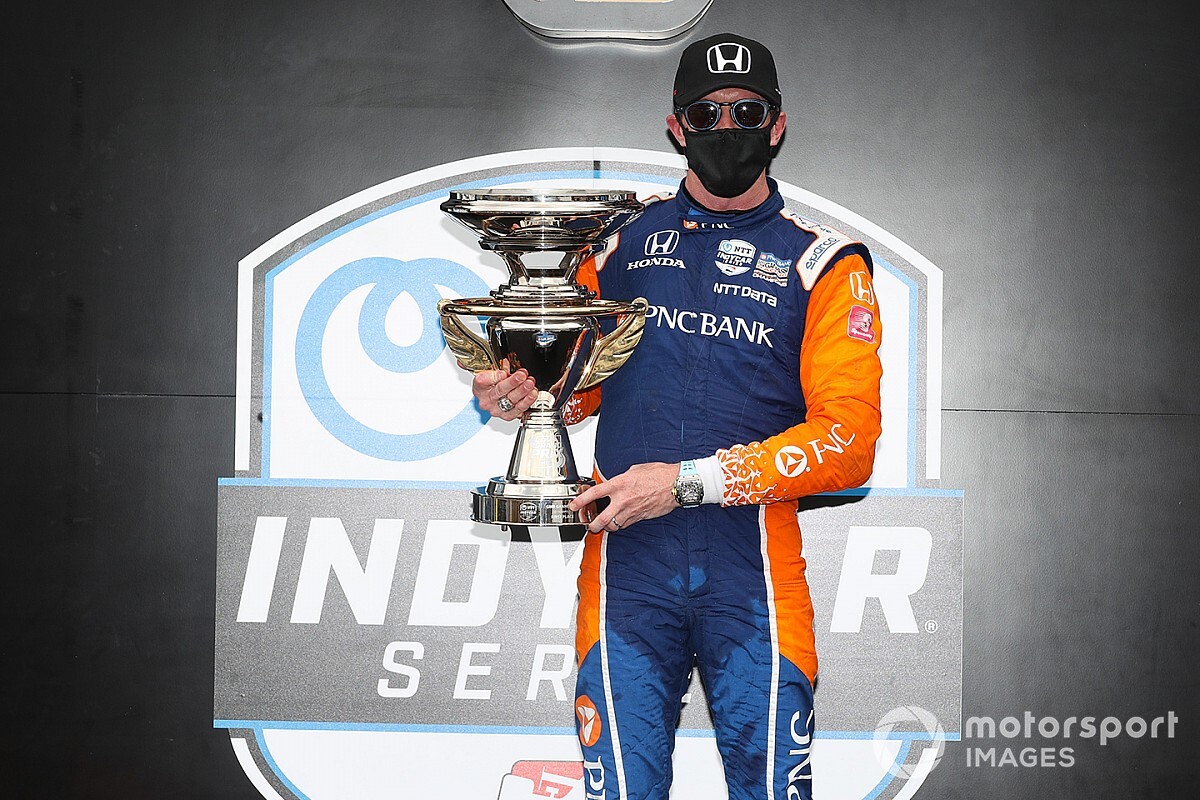 Chip Ganassi Racing and Scott Dixon turned a poor-handling car around mid-race to take advantage of a caution period and take a dominant Grand Prix of Indianapolis victory over Graham Rahal and Simon Pagenaud.

However, there was no chaos at Turn 1, Rahal falling into line in third to hold off Colton Herta's Andretti Autosport machine, Penske's Josef Newgarden, Dixon and Conor Daly’s Ed Carpenter Racing-Chevy.

Arrow McLaren SP’s Oliver Askew, star of qualifying, dropped to seventh by Lap 2, ahead of Ryan Hunter-Reay, Max Chilton and Alexander Rossi, but the big loser at the start was Felix Rosenqvist who plummeted from ninth to 15th. He, like teammates Dixon and Ericsson, had started on Firestone Racing’s primary [black-sidewall] tires.

On Lap 4, Chilton disposed of Hunter-Reay to claim ninth, but otherwise the order stayed static for the first 10 laps, the top four running just under one second apart, with Newgarden a further 1.7sec back. Teammate Pagenaud made no headway in the early stages on his primary tires, and like Marco Andretti, James Hinchcliffe and Pato O’Ward, he pitted early.

Dixon and Rosenqvist also stopped on Lap 12 to change from primaries to alternates, and Rossi, Ericsson and Alex Palou’s Dale Coyne Racing with Team Goh car pitted a lap later.

Newgarden stopped his Penske-Chevy to on Lap 14, and so Daly and Askew moved up to fifth and sixth respectively but they were now nine seconds behind Herta, who pulled in on Lap 15, along with Chilton and Hunter-Reay.

Power pitted from the lead on Lap 17 to take on more reds and next time by Harvey also pitted leaving Rahal out front with 11sec on second placed Conor Daly and 13 on Spencer Pigot in the RLL Citrone/Buhl Autosport entry. Harvey was slightly off his marks in his pit and lost a place to Newgarden who had been flying since his pitstop, and had also vaulted Herta.

Rahal, Daly, Pigot, Santino Ferrucci (Dale Coyne Racing with Vasser-Sullivan) were clearly committing to a two-stop strategy as they ran in the top four places past Lap 22 of the 80-lap race, and Rahal was setting fastest laps while on Lap 23 we had an RLL 1-2 as temporary third teammate Pigot passed Daly for second. Further back, Herta had to concede eighth to Dixon after missing his braking point at Turn 1 and going through the escape road.

Rahal, Pigot, Daly and Ferrucci stopped on Lap 25, but dropped wheelnuts for Pigot and Ferrucci hurt their efforts.

Power thus took over the lead, now 4.5sec ahead of Newgarden who had a 2.2sec advantage over Harvey. But Rahal had resumed in fourth on blacks, just 10sec behind leader Power and ahead of Dixon (reds) and Herta (blacks). And, unlike all those around him, Rahal would have to stop only once more.

Rosenqvist, Dixon, Hunter-Reay and Rossi all pitted around the same time, just before the Lap 35 mark. Then out came the full-course yellow, as rookie Askew lost the rear of the car under hard acceleration at Turn 14 coming onto the pitstraight. The Arrow McLaren SP spun across the track and pounded the outside wall. The AMR Safety Team sprung into action but the 23-year-old was able to step from the car unaided and walk away.

The caution period and temporary closure of the pits hurt the three-stoppers who had yet to pit, and when pitlane opened on Lap 38, Power and Newgarden dived in followed by Chilton and Harvey. Rahal was now leading Pigot and Daly, while Dixon (on reds since his second stop), Herta, Rinus VeeKay (primaries), Rossi, Ferrucci, Pagenaud (primary) and the second McLaren of Pato O’Ward (primaries) completed the Top 10. Power, Newgarden, Harvey and Chilton were down in 13th through 16th.

The restart was clean, but Rossi was soon off the pace with what sounded like a misfire and pitted terminally. Dixon and Herta jumped Daly, and two laps later, VeeKay dived past his teammate to take fifth. Daly, trying to hold on while running primaries, then outbraked himself while struggling to lap Sage Karam’s Dreyer & Reinbold Racing-Chevy. That allowed Pagenaud into sixth, while nearer the front Dixon passed Pigot for second and was now only 0.8sec behind Rahal.

A dozen seconds back from this, Power and Newgarden had passed Andretti and Ferrucci to run 11th and 12th respectively, but on Lap 49 all eyes were on the front as Dixon made his reds count by passing Rahal for the lead and soaring away, pulling out five seconds in two laps. Rahal, having fallen 9.5sec behind Dixon by Lap 55, made his second and final stop. Pagenaud also stopped. To cover their options in case of a caution, Dixon and the #9 team also felt obliged to stop, next time by.

Early leader Power, who had just passed Hinchcliffe for ninth, then stopped for primary tires but stalled as he was leaving the pitbox, obliging him to get pulled back by his crew and re-fired. By the time he got going again he was down in 23rd.

Newgarden and Andretti Autosport’s Zach Veach stayed out late before making their final stops –Newgarden on Lap 61, Veach on 62 – leaving Dixon out front with a 13sec advantage over Rahal. In third now was Pagenaud who had passed Pigot. The Citrone/Buhl car had been suffering engine problems and rapidly fell back after an impressive run that had seemed likely to reward Pigot with a podium finish.

Over the final 10 laps, there was a lively battle between Herta, VeeKay and Ericsson, but more significantly Rahal was now having to work hard to fend off Pagenaud. With eight laps to go, Pagenaud was just one second away – Rahal had more push-to-pass boost left, but Pagenaud had more fuel having run a three-stop strategy.

However, Rahal did just enough to retain second, albeit 20sec behind Dixon who scored his second consecutive victory, the 48th of his illustrious career, and the first on the Indianapolis Motor Speedway road course. He therefore has broken the six-year stranglehold that Pagenaud and Power had on GP Indy.

Herta came home fourth ahead of ECR’s rookie VeeKay and the next highest Ganassi car, that of Ericsson. Newgarden salvaged seventh, just ahead of O’Ward’s McLaren entry, Ferrucci and the largely anonymous RLL entry of Takuma Sato. Polesitter Power could only recover to 20th.