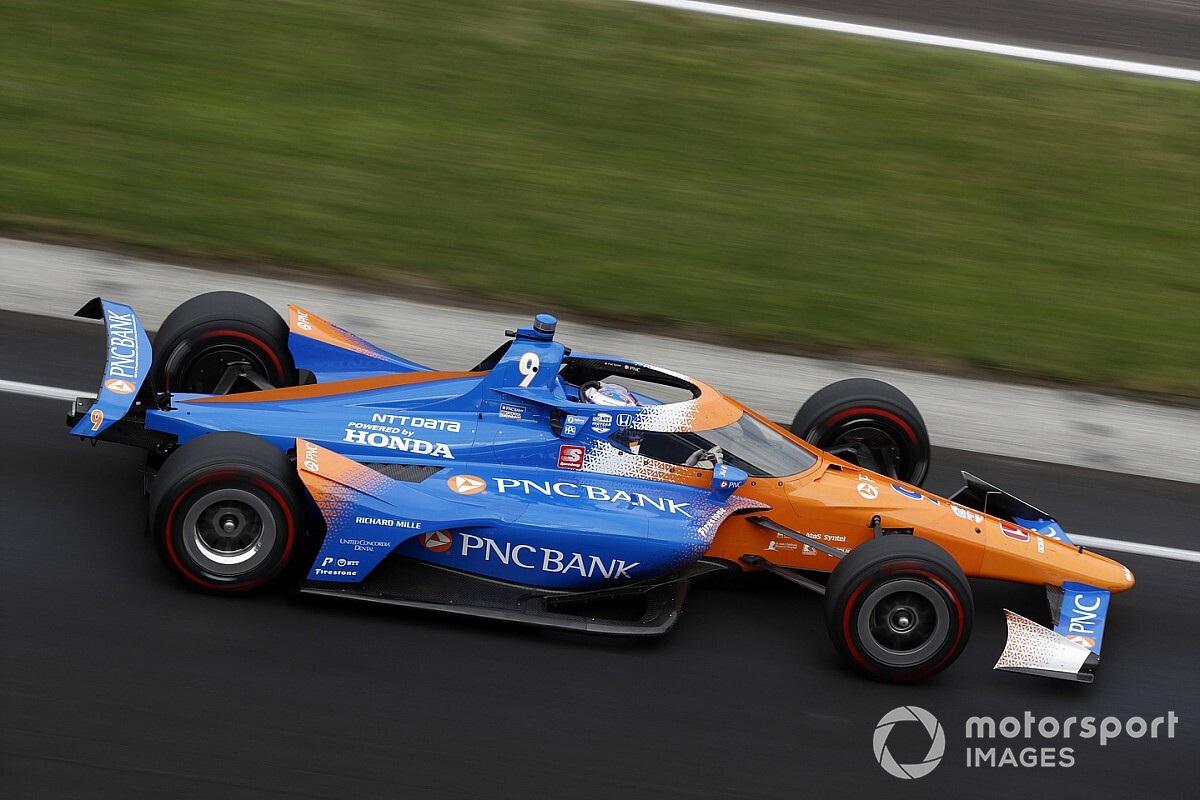 The top two qualifiers for the 104th running of the Indy 500, Marco Andretti and Scott Dixon, finished first and third in Sunday afternoon practice at IMS, but each starred for very different reasons.

Soon after Andretti’s narrow victory over Dixon in qualifying, IndyCar ran a 2hr30min session that saw the cars’ BorgWarner turbos wound back down to raceday boost of 1.3-bar and with raceday downforce levels. This session replaces the one which in recent years was held on the Monday after Pole Day, and serves as the penultimate chance for drivers to acclimatize to running in traffic and adjust their cars’ handling for driving in dirty air. The final opportunity will come in a two-hour session on Carb Day, next Friday, as there will be no track action on Saturday, as per usual.

While six drivers turned 100 laps or more, Andretti turned just 27 – and yet the 21st of these was the fastest of the session, a 224.122mph effort which just shaded the best effort of Team Penske-Chevrolet’s three-time Indy 500 winner, Helio Castroneves. The Brazilian was one of four Chevrolet cars in the Top 10, as the Bowtie runners seemed stronger relative to their Honda-powered rivals with the boost dialed back and in traffic, than when running solo in qualifying at 1.5-bar.

But Dixon unintentionally stole the show with a 218mph spin coming off Turn 4 after hitting a bump. The Chip Ganassi Racing-Honda clipped the outside wall with its rear wing, spin across to hit the pitwall a little harder, and all while wreathed in tire smoke.

Less than hour later, the #9 Chip Ganassi Racing crew had his car prepped and ready to return to action – and the 2008 Indy 500 winner launched to the top of the timesheets with the first lap into the 223mph bracket.

Ryan Hunter-Reay of Andretti Autosport was fourth quickest ahead of Dale Coyne Racing with Vasser-Sullivan’s Santino Ferrucci, who won the 2019 Indy 500 Rookie of the Year award.

Conor Daly, as he had on Wednesday and Thursday, looked very strong in traffic for Ed Carpenter-Chevy, as did his team owner Ed Carpenter who has suffered some uncharacteristic struggles with his car’s handling this past week.

Rookie Alex Palou made it two Coyne cars in the Top 10, but the third one – co-entered by Rick Ware Racing/Byrd/Belardi – was not in action, as its driver James Davison was competing in the NASCAR race at Daytona.

Both Fernando Alonso and one of his Arrow McLaren SP-Chevrolet teammates Pato O’Ward turned 115 laps – more than anyone else – and both looked comfortable in traffic and able to pass. Alonso did have a half-spin-and-stall exiting his pit box but otherwise looked like a veteran campaigner.