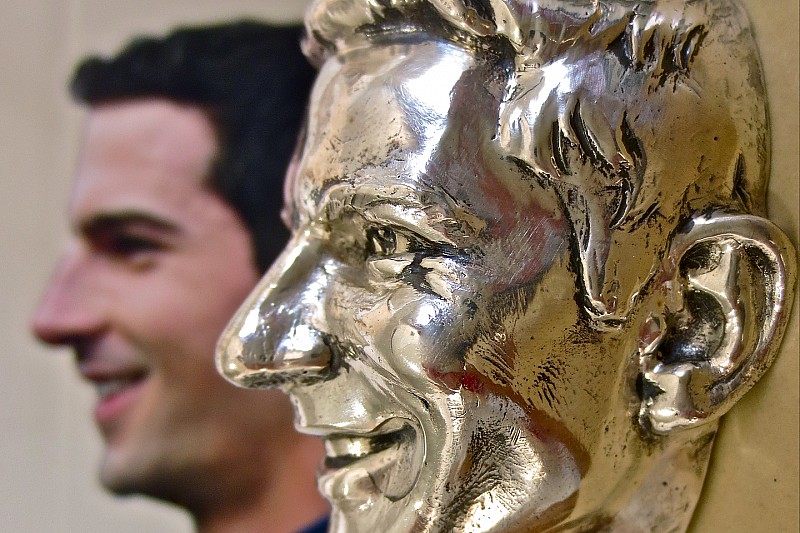 Alexander Rossi, who won the 100th running of the Indianapolis 500, has revealed his sterling silver ‘face’ on the Borg-Warner Trophy at the Indianapolis Motor Speedway Museum this afternoon.

The Andretti-Herta Autosport driver scored a remarkable victory in the world’s biggest race after a brilliantly managed final stint. The Californian saved enough fuel to eke his fuel load to last 36 laps, as his principal rivals in the closing stages made a late splash-’n’-dash pitstop, then desperately tried to catch him. The #98 ran out of fuel halfway around the slowing-down lap.

Thus Rossi has become the 103rd face on the 5’5”, 110lbs Borg-Warner Trophy, an apparently anomalous figure that accounts for shared rides, missed years due to two World Wars, and the Tony Hulman visage also included. (Details below video)

Said Rossi on seeing his face in sterling silver for the first time: “I’m still tripping out about it! It’s very special and it’s way more detailed, accurate and amazing than I ever thought it would be.

“The specialness of being on the Borg-Warner Trophy and to be next to names that have such a legacy and history in the sport, guys I grew up admiring and watching and dreaming of one day being able to race at that… Now to kind of be in the same sentence as them is something that I don’t really think I fully understand yet…”

William Behrends, the sculptor who has created the last 27 faces for the Borg-Warner Trophy, said he was pleased at the astonishment with which both Rossi and previous Indy 500 winner Juan Pablo Montoya had reacted to their sculptures.

He said: “That’s a lot of fun, it’s worth all the effort that I put in to making Alexander’s and Juan’s models and in preparation for that. It just makes it worthwhile that they (Montoya and Rossi) look at it and they’re pleased with it and think it represents them well.

“So that was really a nice moment for me – Alexander was quite amazed and happy, I am pretty sure.”

Describing his attempt to capture their personality in the sculpture, Behrends said: “I don’t think I can define what I look for in the personality, but there’s something distinctly there. Being able to sit with them for a couple of hours and talk about their lives, about their racing, about their win –it really does translate something into the work for me. It really enriches it for me, makes it more pleasurable for me to do.”

Rossi said of Behrends’ sculpture: “It blows my mind that [Will] was able to get this so accurate just from pictures. I am so far from being anywhere close to an artist but you can really appreciate what he’s done and I don’t even know where to begin in how you acquire such an amazing skill set.

“It’s fantastic that I had the opportunity to work with him for a short period of time and I think that it’s a very special program to be part of.”

Although Rossi cannot keep hold of the Borg-Warner Trophy, which is worth $3.5m and remains in the Indianapolis Motor Speedway Museum, he will receive a sterling silver ‘Baby Borg’ with a copy of his face sculpture bonded to its marble base.

Among the 103 bas-relief images adorning the Borg-Warner Trophy, all are drivers, except for one. In tribute to his rejuvenation of the track and Indianapolis 500 following World War II, a 24-karat gold likeness of late Speedway Owner and President Anton "Tony" Hulman, Jr., was also added in 1988. In 1924 and 1941, two drivers shared the victory and a spot on the trophy, one for starting the race and the other for finishing it. Two bases have been added to the original trophy, providing added capacity for more winners until 2034.

Chilton says Ganassi was wise to return to Honda