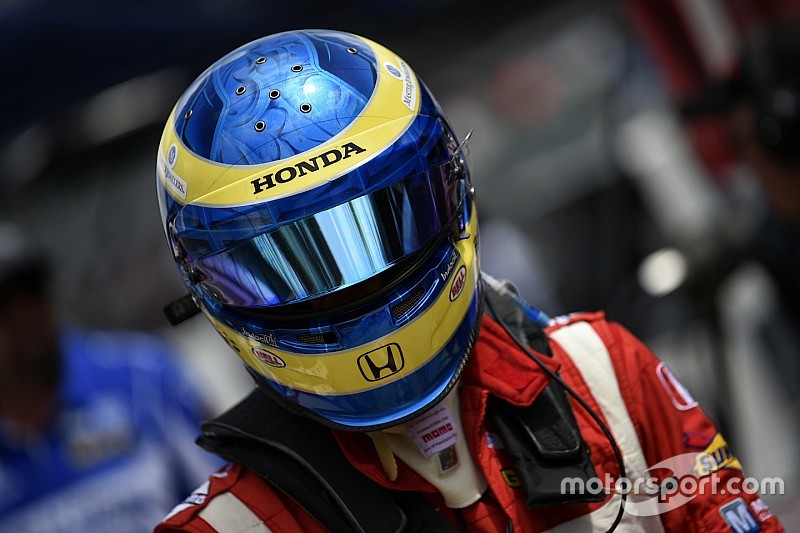 Imminent thunderstorms brought practice to a halt at Indianapolis Motor Speedway after 90mins of action today, in which Sebastien Bourdais’ Dale Coyne Racing-Honda went fastest overall and also fastest on the no-tow charts.

With the turboboost on all engines raised from 1.3-bar to 1.4 in preparation for the weekend’s qualifying runs, the Frenchman turned a 233.116mph lap on his 11th lap with the aid of a tow from a rival, but then later set a 231.192mph in the middle of a four-lap qualifying simulation, with no drafting help.

Andretti Autosport-Honda teammates Ryan Hunter-Reay and Takuma Sato were second and third fastest but 13th and sixth on the no-tow charts, while Penske’s Juan Pablo Montoya was fastest Chevrolet runner. However, teammate Will Power was the fastest Chevy on the qualifying sim, and the only one of the Bowtie drivers to break the 230mph driver without the aid of a draft.

Arguably the star of the show was Fernando Alonso, who swiftly adapted to the trimmed out downforce levels, fifth fastest overall, and a deeply impressive third fastest without a draft.

Schmidt Peterson Motorsports-Honda pairing James Hinchcliffe – whose pole last year was a 230.7 – and Mikhail Aleshin were sixth and seventh.

Yesterday’s pacesetter Jay Howard was eighth ahead of Ed Jones (DCR-Honda) and then Chip Ganassi Racing’s Tony Kanaan and Scott Dixon 10th and 11th. Kanaan was also second fastest on the no-tow charts behind Borudais, ahead of Alonso and Power.