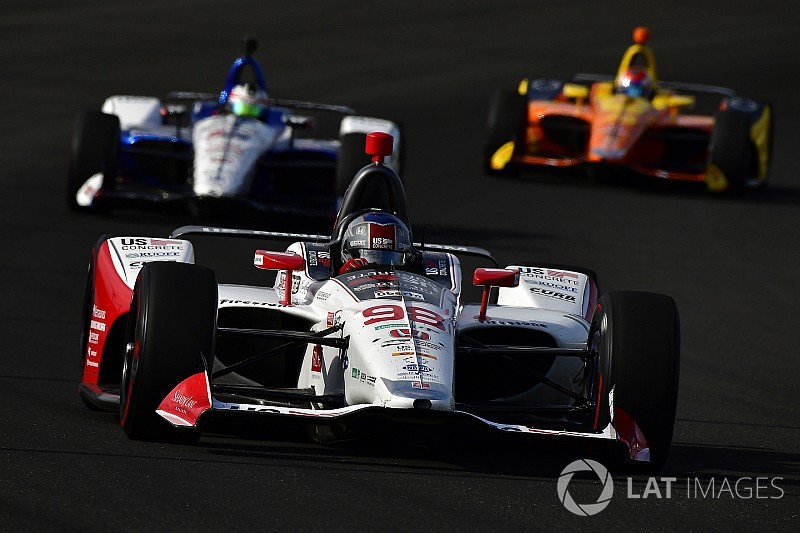 Marco Andretti put Andretti-Herta Autosport and Honda on top of the speed charts in the first half of the second day of practice for the 102nd running of the Indy 500.

Andretti grabbed P1 with a best speed of 226.900mph on his 12th of 29 laps to head 2008 Indy winner Scott Dixon in the Chip Ganassi Racing-Honda, and 2013 Indy winner Tony Kanaan in the AJ Foyt Racing-Chevrolet.

Kanaan, who turned very few laps yesterday, turned the fastest lap without the aid of a tow, a 223.048mph which narrowly edged the Ed Carpenter Racing-Chevrolet of  Carpenter himself. In fact Carpenter was also right behind TK in the overall speed charts.

With some 15 cars on track at around 1.30pm, there was plenty of drafting practice to be seen, the four Schmidt Peterson Motorsports-Hondas of James Hinchcliffe, Robert Wickens, Jack Harvey and Jay Howard in formation and working together for the equivalent of a full stint.

Noteworthy no-tow performances came from the Carlin-Chevrolet pair of Max Chilton and Charlie Kimball who were fifth and sixth fastest on the NT chart.

Conor Daly, who got only a handful laps under his wheels in yesterday’s practice, has been the busiest driver of the day so far, turning 65 laps in the USAF Thunderbirds-liveried Dale Coyne Racing-Honda.