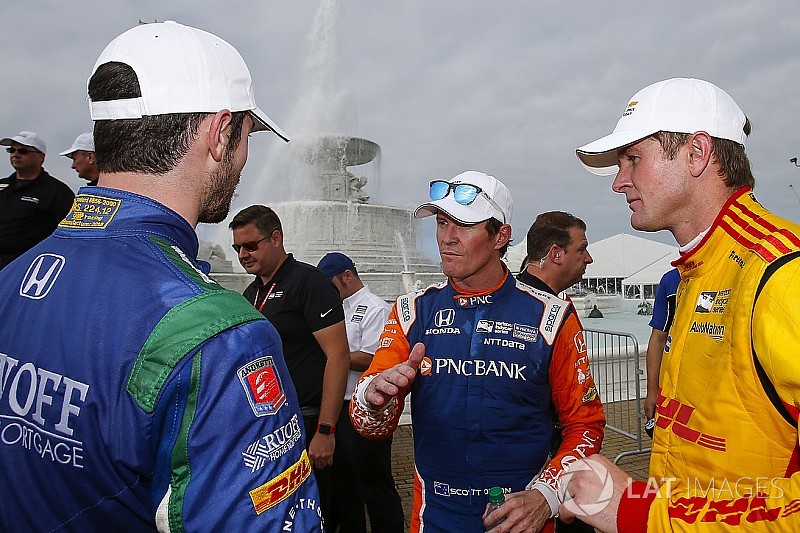 Dixon, who has been at Chip Ganassi Racing since 2002 and won four championships, has now joined Andretti in joint third in the all-time winners’ list, behind only AJ Foyt (67) and Mario Andretti (52).

Today’s result also moved Dixon into second place in the 2018 championship standings, just ahead of Team Penske’s Will Power and just behind Rossi who today notched up his fourth top-three finish of the season.

Rossi stated: “We respect [Dixon] as not only one of the best drivers in IndyCar history but also in the world, and it's a pleasure to race against him, and any day that you can beat him is a good day.

“I think he definitely had the upper hand on us today, and he's been strong all weekend. We've got four very good cars that we can go analyze tonight and hopefully draw all the strengths together and come up with a package to beat him.”

Runner-up Hunter-Reay, still looking for his first win since August 2015, was similarly generous in his praise, stating: “Scott is one of the best. It's amazing, [considering] how equally matched everything is, to be in that bracket of third overall.

"As long as they've been collecting these stats, there's many years where certain drivers would have streaks where they'd win 10 races in a season or something like that, so it's amazing that in this day and age that he's able to continue to rack them up and be in that list.

“That's definitely not the guy you want in front of you on a restart. It's a bummer that I couldn't catch him. We were going to make a run for it, but congratulations to him on that third – how many more does he have to do to go to second [place in the all-time standings]?”

The moderator in the press conference said: “Ten – do you think he can do it?"

Rossi asked, “Did he pass Michael?” and when told that no, Dixon and Michael Andretti are tied, Rossi responded, “Ooh, that's not going to go down well.”

The moderator asked: “Would you guys like to see him move past Michael?” to which Hunter-Reay responded, “I'll plead the fifth on that.”

Rossi joked, “It's in our job description and contract to make sure he does not pass Michael,” with Hunter-Reay adding, “That's our job now. That's what we're going to talk about every morning – not to let him pass Michael.”

Hunter-Reay also said the perspective of time and distance will foster a greater appreciation of Dixon’s talents.

“I think he deserves a lot more credit than he gets. Obviously you guys are giving it to him, but I'm sure 10 years after he retires, we'll all make a lot bigger deal of it than we are now.”

Michael Andretti, whose wins spread from 1986 to 2002, tweeted the following response: