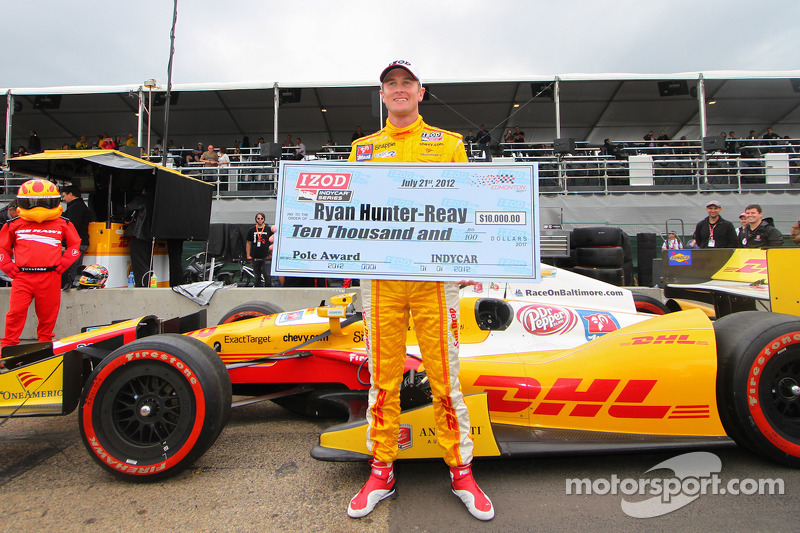 By a scant one-hundredth of a second, Ryan Hunter-Reay edged Dario Franchitti to capture his first pole of the 2012 season. However, because of a 10-spot grid penalty after an engine change, Hunter-Reay will have to surrender the number one starting spot to Franchitti. Still, the American driver will keep that all-important point that comes with capturing the pole. Following Franchitti were Ryan Briscoe, Takuma Sato, Alex Tagliani, and Helio Castroneves.

"I am really happy with that pole - we even saved a set of Firestone Reds for tomorrow,” said Hunter-Reay, who ran a used set of reds during qualifying to keep a set tomorrow’s race. Conditions became especially tricky when a brief shower hit the track as the second group finished up the first round of qualifying. The rain intensified ahead of round two, forcing all drivers to use wet weather tires during the session.

Tomorrow will be really interesting for everyone.

“The track was constantly changing throughout the sessions (because of the rain), and putting on a clear visor helped so I could see the wet spots,” Hunter-Reay added. “It was really hard to come to the decision to run on the used Red (tires) in the final round, but it was the right thing to do. We hadn't been on a wet track all weekend so it was kind of a guess on what (racing) line to use. These cars have very little give in them - going over the bumps and when it is wet it is very tricky. It was great we picked up a championship point for the DHL/Dr Pepper team, but too bad we will be staring 11th instead of first because of the engine change. Tomorrow will be really interesting for everyone."

Dario Franchitti was disappointed to so narrowly miss out on the pole, which would have been his fourth straight of the season. Still, he was ultimately pleased with the effort. “We’re a hundredth off. It’s so difficult to piece a lap together,” he said afterward. “Good job by the Target guys today. We’ll go racing tomorrow—hopefully more predictable conditions.”

Team Penske’s Ryan Briscoe was also happy with the result, as he will start second after qualifying third. “We had to do our best in Q2 in the wet and I wish maybe we would have waited a little bit longer in Q3 with the sticker tires we had that gave a little more speed, but all in all it was good,” said Briscoe. “I’m very proud of the team, my engineer, the setup change we made and it is good to be starting at the front. We’ve got lots of guests here from Hitachi and we need the win for them. I’m looking forward to a good day tomorrow.” 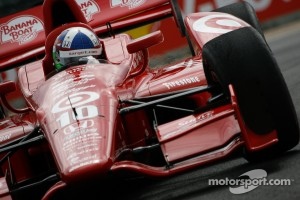 Teammate Will Power was not as happy though. Power, who had been fast all weekend, was caught out by the rain and changing conditions, ultimately missing the Firestone Fast Six; after Hunter-Reay’s penalty, Power will start sixth. “Tough finish for the Verizon car today, I thought we had a fast car but we didn’t play the weather correctly,” said Power an Edmonton winner in 2009 and 2011. “It sprinkled enough to use the wet (tires) but then created a dry line pretty quick. I should have known better there as the fastest laps were coming at the end. Tomorrow will be a great challenge and we need to have a good result.”

Sunday’s Edmonton Indy will roll off at 2:45 EST,