How PFC stepped up braking performance for 2018 IndyCar 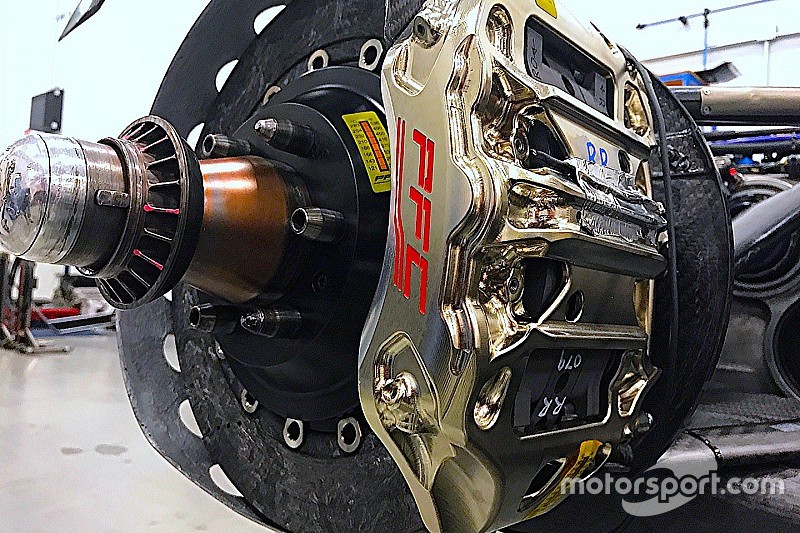 With 2018 IndyCars using spec aerokits that shed more than 2000lbs of downforce in road/street course form, it required a recalibration not only by drivers and race engineers but also by its new brake supplier, as David Malsher reports. 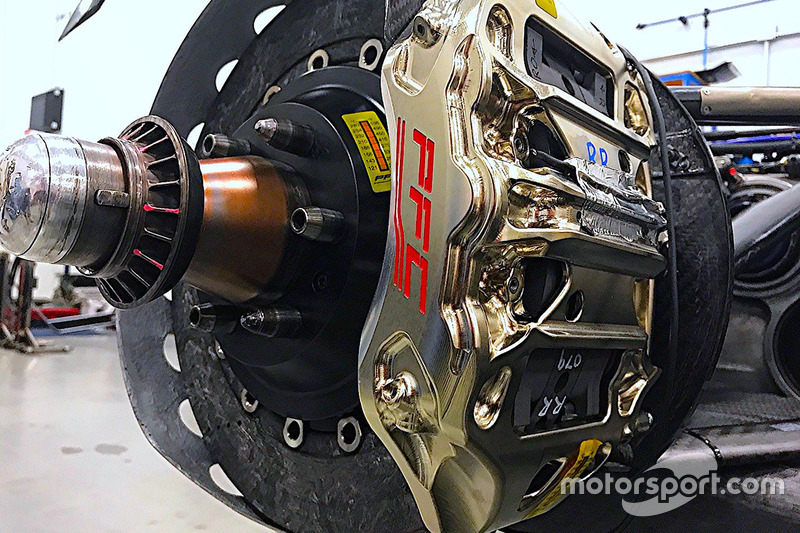 IndyCar’s primary aims in making spec changes for 2018 – better racing, better cockpit protection from side impacts, more demanding cars, better-looking cars – were indisputably worthy. And as you’ll have read in several articles here on Motorsport.com, the consensus among the drivers is that the removal of downforce and drag have indeed made an IndyCar more of an animal to drive.

And it’s not just the teams and drivers who had to buy into this major revamp; so too did the series’ common suppliers. One obvious example is Firestone. Later this month, IndyCar’s president of competition and operations Jay Frye will be meeting with Firestone Racing to discuss (among other things) tire allocations per race weekend, possibly introducing an extra set per weekend for rookies, and increasing the difference between primary- and alternate-compound tires.

But Firestone’s engineers are also having to work on the structure of its tires. Predictably, what worked for cars that were smeared into the ground by aero load from 2015-’17 manufacturer aerokits is not ideal for a car now shorn of one-third of that downforce.

At least, however, Firestone gets recognized for its endeavors; IndyCar drivers and team owners, as well as series officials, are pretty much unstinting in their praise of the Nashville, TN-based company. Most organizations that enjoy a monopoly tend not to get credit for doing their job right, but get called out publicly if there’s a problem. IndyCar’s brake manufacturers – yes, there were two of them this past season – got a taste of that in March in St. Petersburg. 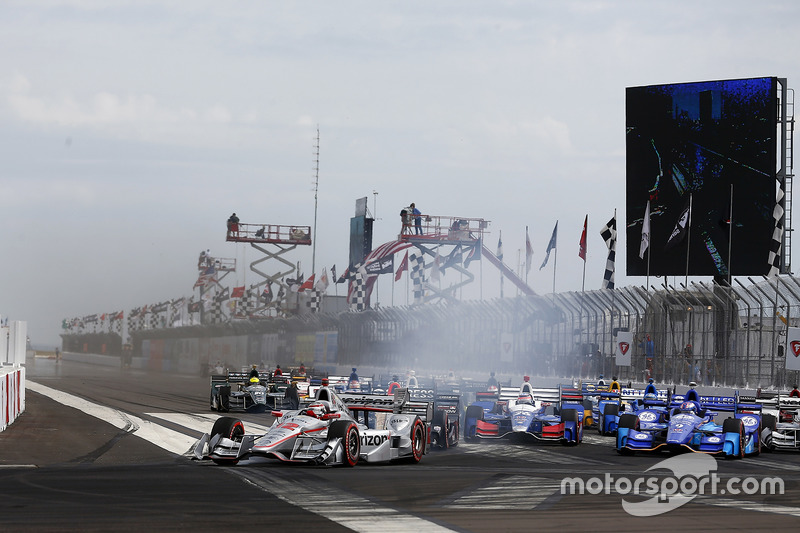 Will Power, Team Penske Chevrolet locks up his brakes at the start leading into turn one

Since 2013, there had been grumbles from certain team managers, race engineers and drivers that the brakes they received from Brembo were inconsistent – not in terms of stopping power, but in terms of uneven wear rates causing (and caused by) temperature anomalies across the axle. Intriguingly, the complaints usually came from members of teams that were only sporadically competitive and a couple of off-the-record enquiries among the top teams revealed why: they were happy to fettle what Brembo gave them and keep quiet about it, regarding it as one of their advantages over their less well-drilled rivals.

However, eventually the grumbles grew in volume to where IndyCar invited Performance Friction Corporation – which had earned praise for its stoppers on the new-for-2015 Indy Lights car – and Hawk, to take part in a comparison test with Brembo’s latest iteration. This event, held at Road America in June 2016, was a blind one for the drivers, in that they were unaware which product they were using at any given time. The conclusion drawn from their feedback was that PFC – with what’s described as a “unique continuous single-strand carbon matrix” – should become the series’ new spec brake supplier for 2017.

Who then complained that this sudden switch was too costly is unclear, but eventually IndyCar decided to make the changeover more gradual. For 2017, IndyCar’s brake specification would be Brembo calipers with PFC pads and rotors and, like most compromises, it didn’t really satisfy anyone. At the season-opener in St. Petersburg some drivers had braking issues because the PFC pads run hotter than their Brembo equivalents, and in the case of some teams, however Brembo make their calipers, these ones had already been through several duty cycles.

IndyCar resolved the issue by allowing both Honda and Chevy to incorporate updated brake cooling in their respective aerokits. OK, the teams who’d already made the Brembo/PFC combo work fine could legitimately have moaned about their rivals being handed a remedy on a plate, but thankfully all saw the bigger picture. No one wanted to see drivers run out of stopping power.

A few days later, Darrick Dong, director of motorsports at PFC, absolved his rival Brembo of blame, telling Motorsport.com: “Half the teams [in St. Pete] had it pretty well figured out and half the teams were struggling with caliper temperatures. And for the most part it’s about learning that the system they have now is different than the system they had before and that a modern 3D carbon system disperses its energy in a different way.

“It certainly wasn’t a fault of anyone else’s product. At the end of the day there’s been a lot of learning by multiple parties including ourselves and I think the teams did an excellent job in resolving the issues themselves.”

The remainder of the season ran crisis-free in the braking department. 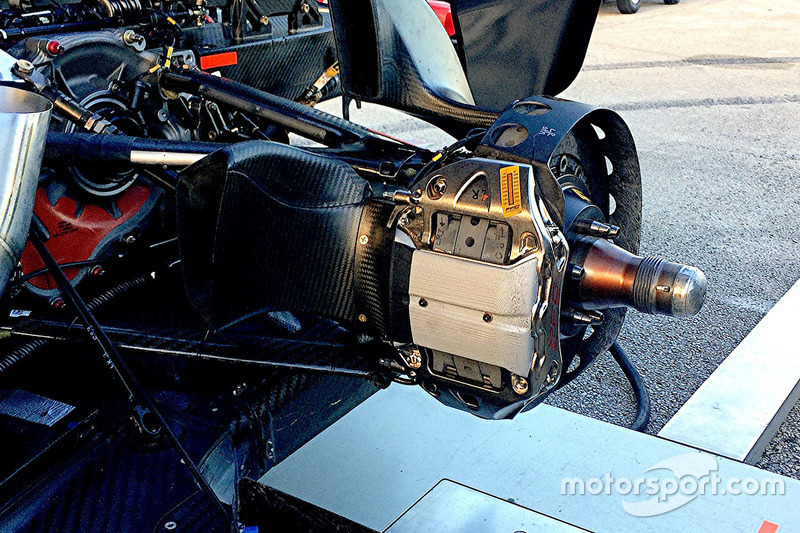 All PFC, all new, all good so far

Seven months later, with the 2018 test IndyCars using PFC calipers as well as pads and rotors, Dong is grateful for the 2017 experience ‘out in the field’. No, he hadn’t originally been happy with the cost-led compromise of the Brembo calipers being grandfathered one more year; as much as anything, any PFC marketing along the lines of ‘elite series chooses elite braking system’ of course had to be put on hold. But having two thirds of its product gaining track time this year provided the company’s engineers with some essential pointers for 2018, pointers that would never have been gleaned from the system on the Dallara IL15 Indy Lights car.

“Honestly, we didn’t use anything we learned from Indy Lights on the IndyCar,” he says. “With the IL15, we had started off with a clean sheet of paper for the caliper, disc and pads and they’re at such a high level for the car, it’s been a no-brainer for that series.

“Well, we also started with a clean sheet for the 2018 IndyCar, and we learned from this past year where the priorities would be in cooling because of the venues they go to and the speed and weight of the car. We have had four 2018 cars fitted with the production all-PFC combination doing extensive testing since July of this year and the results have been pretty good.

“At the last IndyCar test, at Sebring with full fuel loads in 100-degree temperatures, there were no overheating problems. The cars did long runs starting on full fuel loads, then were just held in pitlane to see what the heat soak issues might be, just sitting there percolating the brake fluids. Then we sent them on their way again and none of the drivers remarked about the brake pedal going long. That was gratifying.” 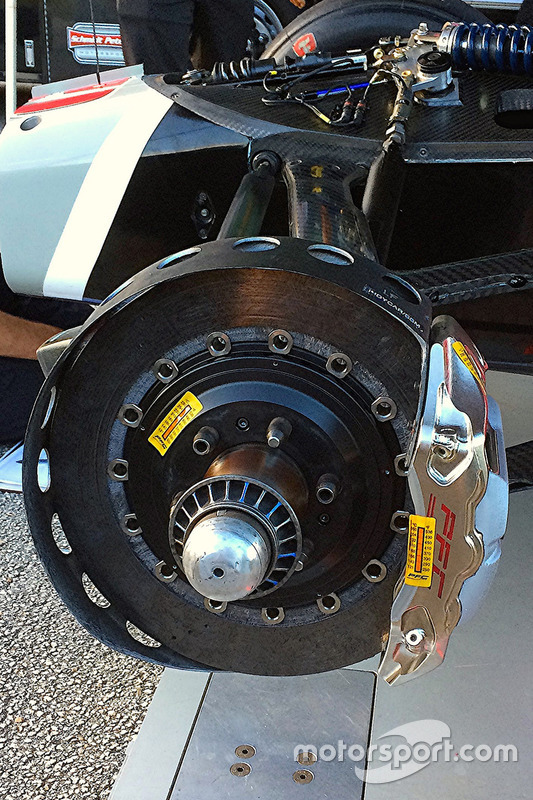 So what’s been done?

The 2018 cars have upped the challenge for PFC, particularly when the cars are in road/street course form. With less drag, next year’s IndyCars will be hitting higher top speeds and with less downforce, they have to get down to a lower cornering speed.

“When we talk about the increased length of the braking event, we’re not talking about seconds each lap – we’re talking about portions of a second,” says Dong, “but yes, it has made a difference. At Mid-Ohio I believe the cars were nine miles-per-hour quicker on the back straight, but slower in the corners. The highest sustained lateral load went from 4.2G down to 3.6, because although people have been quoting an approximate 2000lb loss in downforce, I heard it was nearer 2400. So the drivers have to be on the brakes for longer.

“But what’s nice is that everyone knew and understood that beforehand, and so part of the new aerokit provides updated brake cooling, taking into consideration those challenges in front of them.

“One of the things we implemented was glove-cooling on the caliper so there’s a dedicated duct that goes over the top of it and blows cooling right down into the throat of the caliper. We were able to take 50-60degC out of the caliper just with that design.

“Then we have a patented heat cap and a special insulator beneath that heat cap in the piston area, and that is made out of a special material. That also dramatically dropped the temperature, particularly for heat soak, compared with a more standard cap. That heat-soak situation was what we were checking with that stop-and-hold in the pitlane at Sebring and, like I said, even after a full-tank run, all seemed good.”

As well as improving cooling via airflow, PFC has upped the spec of the pads.

“The volume of carbon content has increased,” says Dong. “The thickness of the pad has gone up from 23mm to 24mm but also that pad has more carbon content by volume. That means it takes longer for the caliper to get overheated because there’s more mass in the pad itself.”

He adds with pride: “You’ll also see that the calipers are mono-block and look very different. The previous ones looked generic but these look purpose-built; they look like they belong on a car at this level.”

If that sounds like a comment purely to do with aesthetics, think again. A cleaner design produces less drag, a subject of particular interest to teams once they hit the ovals.

“We have introduced a lot of neat little features that we can’t fully discuss just yet,” says Dong, “but what I can say is that one of them minimizes the motivation for the teams to fiddle with the brakes to get the drag out of them on ovals. It’s a pad retraction system, and we first ran it at Chevrolet’s Phoenix test last month.

“For the first time in who-knows-how-long, the drivers [Will Power, Ed Carpenter and Spencer Pigot] were having to brush the brakes at Phoenix because of the lack of downforce, and with this retraction system, the first little bit of travel in the brake pedal is to compensate for that. Then it behaves like a roadcourse brake system.

“But the important thing from the speed point of view was that from the data we’ve seen so far, I think we’ve done a pretty good job of reducing that dreaded drag.” 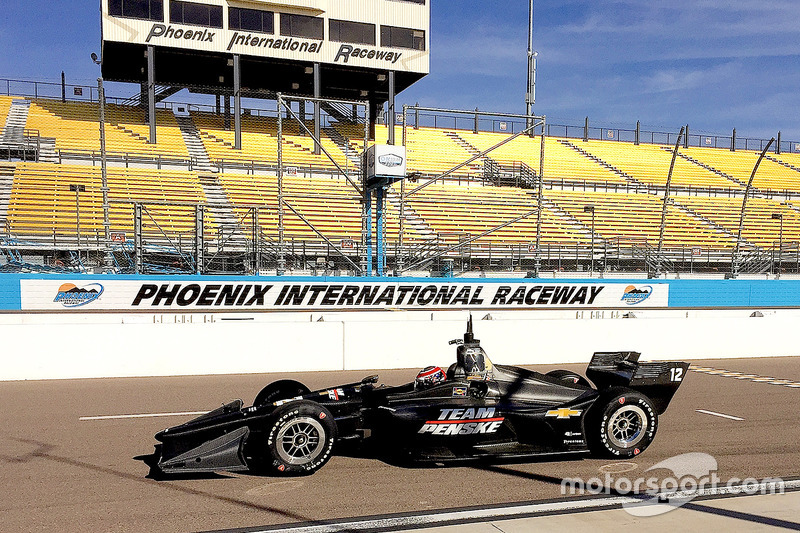 Ultimate verification yet to come

The effectiveness of PFC’s efforts can only be assessed properly once a field of 20-plus IndyCars has hit all four types of track on the 2018 schedule. And it seems strange that the indicator of success will probably be the drivers not giving due credit. As Sebastien Bourdais commented while bemoaning his braking travails at KV Racing in 2016, “Brakes are supposed to be bolt-in parts that just work and no one should really have to discuss.”

So the folks at PFC who tried in vain to earn the IndyCar contract six years ago when the series was switching to the Dallara DW12 will enjoy the lack of criticism, should all go well.

“I didn’t like it at St. Pete this season when we had that issue with the combination of our gear with Brembo gear,” says Dong. “I hated the idea that, as the new supplier, the perception to some might be that we’d come into it like rookies. Anyone who knows us will be aware that we don’t go into any situation blind to the challenge ahead.

“The fact is, along with a challenge comes a responsibility and we’re happy to accept both. We’re looking forward to it.” 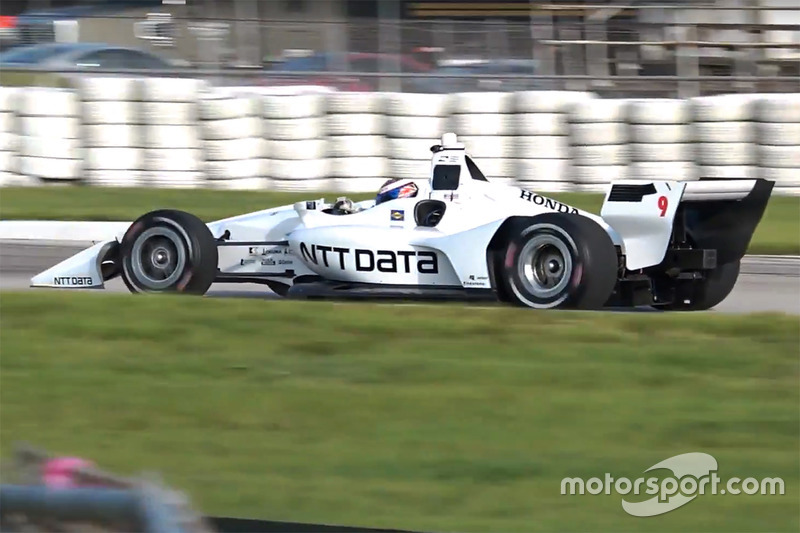 Fernandez: Local driver will be crucial to IndyCar success in Mexico