Honda Performance Development president David Salters says a hybrid system on IndyCars in 2023 still presents a satisfying engineering challenge, despite the unit being built by a third party.

Asked by Motorsport.com if he was fully behind the move to adopting a hybrid system on IndyCars, despite car manufacturers heading down the all-electric path, Salters replied: “Yes, it’s relevant technology, it’s electrification. I think it could be quite interesting.

“It’s relevant to our engineers, we make some very nice hybrid cars so we get to leverage that skill.

“There’s two bits to it: we will move to hybrids, but also we currently race on a bio-fuel effectively, E85 – 85 percent ethanol – so we’re learning about those things as well. We’re looking forward to that too.”

With IndyCar employing a third-party – as yet unannounced – to build the hybrid system, so it’s common to the forthcoming 2.4-liter V6 twin-turbo engines of both Honda and the Chevrolet, HPD’s input to the unit will be negligible. However, Salters insisted that was not a frustration even for a technology-driven company such as Honda.

“Well, we’re helping,” he said. “It’s in everyone’s interests to make it work.

“And you know, there’s lots of sourced technology, and so a lot of it is about applying it and integrating it, making it work together. You could arguably say that’s some of the challenge.

Both Salters and Toyoharu Tanabe, Honda’s Formula 1 technical director, said that the imminent shutdown of the company’s F1 program would allow some pooling of resources.

Said Tanabe: “The specification of the hardware itself is slightly different but already we have started to work together, so there is some technical transfer between Honda Formula 1 and Honda IndyCar. Some people work together to share the information and [work] on the development as well.”

“As Tanabe-san said, we work together,” Salters agreed. “We have our own week-in, week-out priorities that we have to go and do, but we try and communicate; we’re all Honda, and we try to communicate, and have good ways of doing that…

“And you can imagine there’s been tremendous learning in F1 for the electrification side, so we try to share as interested parties. We’re engineers and all our team, women and men, are very like-minded so we share where we can.

“We need to get on with our own work and this keeps us pretty busy but we have good ways of trying to share information and talk together and brainstorm a bit.

“That’s the lovely thing about Honda, I think. We’re all under the same company and it’s probably quite unusual that we have people competing on both sides of the Pond.”

Both Max Verstappen of Red Bull Racing-Honda in Formula 1 and the Chip Ganassi Racing-Honda drivers in IndyCar, Alex Palou and Scott Dixon, could clinch the legendary Japanese marque championships this year.

Palou currently leads the IndyCar drivers’ championship by 25 points, despite serving early-engine-change grid penalties in both Detroit Race 1 and Gateway. The latter event was a result of an engine blow-up during the second IndyCar race on the IMS road course last month, which cost him a potential third or fourth place in the race.

On the subject of that failure, Salters remarked: “IndyCar’s a little bit different because we supply a lot of engines, there are a lot of cars, and when we’re trying our best, we’ve had 16 cars out there.

“That leads to certain issues and that’s hard because it’s not like we’re trying to back off the performance, so there’s quality stuff that we really need to keep on top of. So I hope we’re on top of that – time will tell.”

Regarding grid penalties for drivers who need an engine change early, Salters replied: “I don’t know. It has some advantages because it stops us trying to change engines. We have budgets, we have to manage our budgets. We’re responsible, and can’t just change engines willy-nilly.

“So its general purpose is good – but there’s probably one or two unintended consequences so we have to think about that as we go forward.”

IndyCar is reviewing that regulation for 2022, and many expect it to be replaced by a measure that hurts the manufacturer more and the driver less. 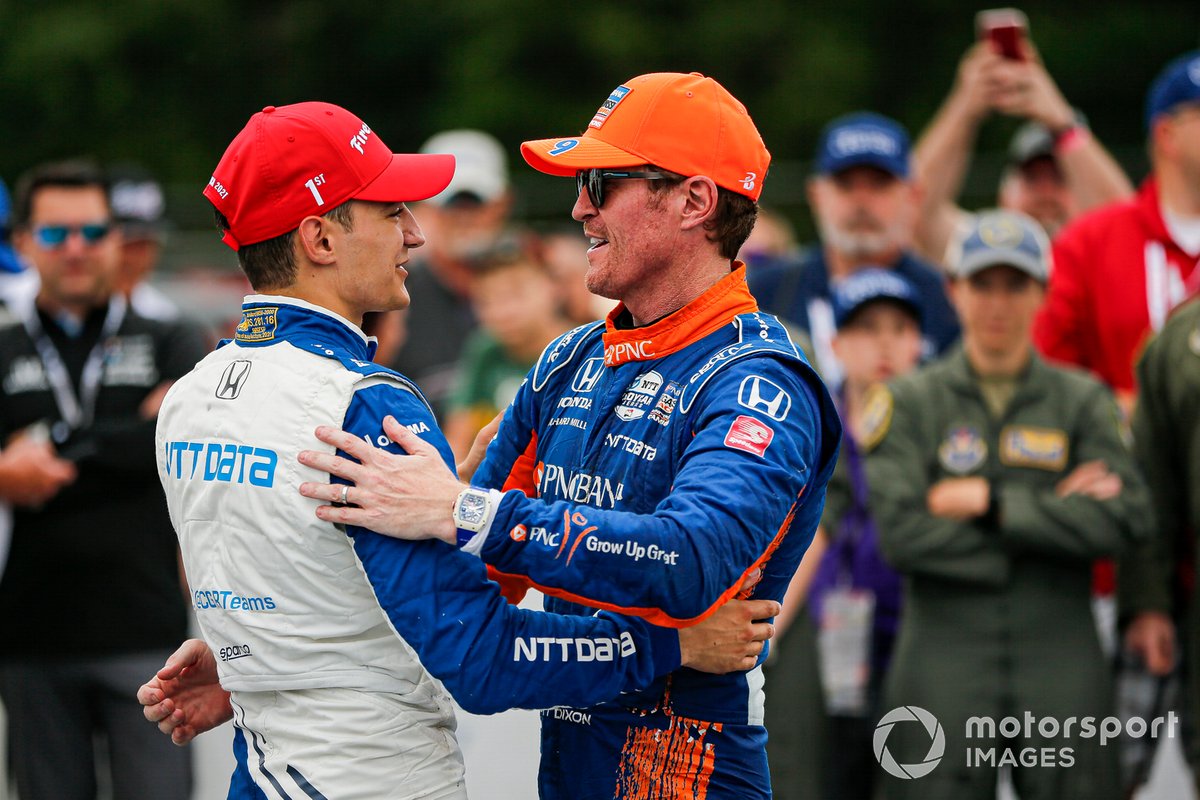 Chip Ganassi Racing-Honda's Palou and Dixon lie first and fourth in the title hunt for the 2021 NTT IndyCar Series championship.