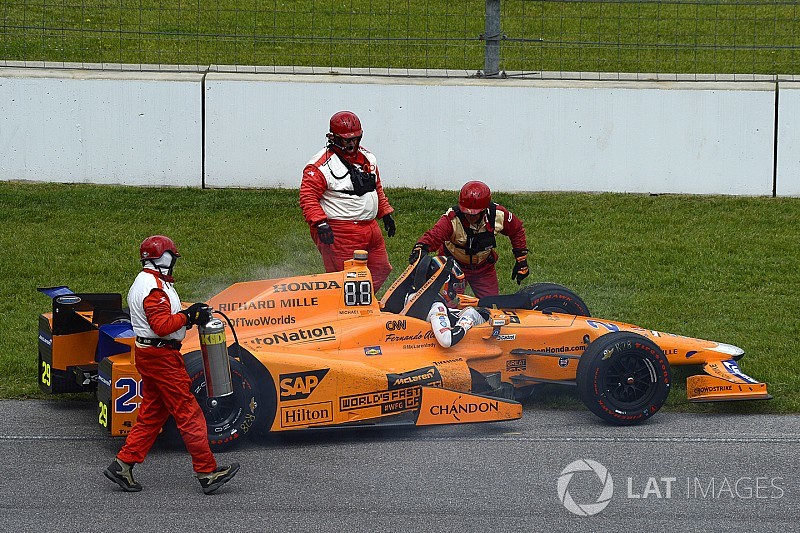 Art St. Cyr, president of Honda Performance Development, says the flawed part causing a rash of reliability issues this season has been pinpointed and some new units will be installed in time for next week’s Iowa Corn 300.

St. Cyr did not identify the part that caused the problem, but described it as an internal part that has been used for three years and not shown susceptibility until this season, but was caused by “an intermittent processing issue that wouldn't show up in a simulation.”

He told IndyCar.com: “There is no plan right now to do a wholesale change of our engines. Right now, it looks like [the failure] happens in about one out of every eight engines. If it does fail, it usually fails early, so when that problem arises, it shows up pretty quick.

“Our expectations are that once we get the engines in the spares pool, we will continue using the engines that are in the car throughout the remainder of their mileage. Then those will be replaced with new engines.”

Some revised powerplants will be installed in time for the Iowa Speedway race and the majority would be provided by the Honda Indy Toronto weekend a week later.

“When you make more horsepower, you do expose parts to more stresses. That's the fundamental thing about it. In this particular case, what it did is it reduced our safety factor on that particular part.”

Talking of the failures that cost Fernando Alonso, Ryan Hunter-Reay and Charlie Kimball a shot at Indy 500 victory, St. Cyr said: “In general, our main goal is to win the Indy 500. We knew that even if we ran the engines at full power, the majority of our engines were going to make it.

“In that case, we were willing to make that tradeoff. If it was going to fail every engine, then maybe not.

“Every circumstance is different, but in this case, we were willing to make that call. You're at risk every year.”

Honda won Indy with Takuma Sato and Andretti Autosport, and currently leads Chevrolet 6-4 in race victories this season – a major turnaround from the 14-2 hammering HPD took from the Ilmor-built units last season.