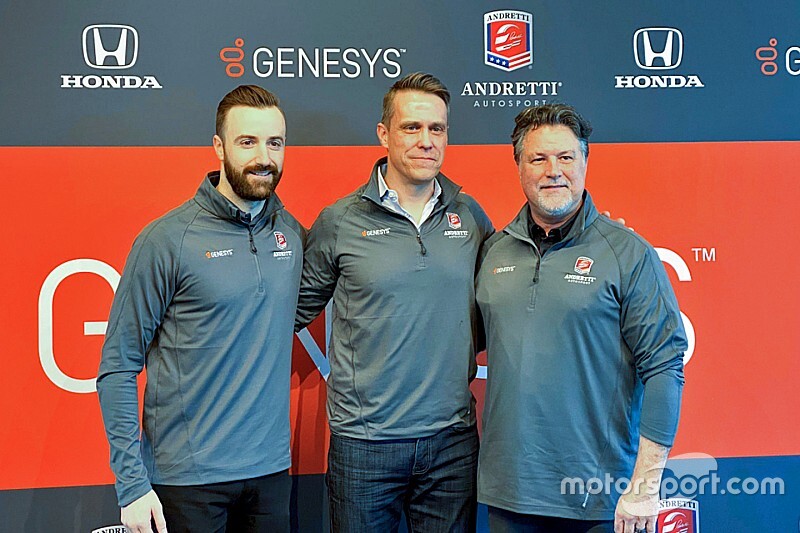 James Hinchcliffe says that the enforced switch to a part-time program for the 2020 NTT IndyCar Series hasn’t altered his physical preparations, as he appears set to make his season debut in May.

Andretti Autosport-Honda today confirmed a Genesys-sponsored #29 entry for Hinchcliffe in May’s GMR Grand Prix of Indianapolis, the 104th running of the Indianapolis 500 and June’s Texas 600 at Texas Motor Speedway. And while Hinchcliffe, who was dropped from Arrow McLaren SP’s lineup last October, is extremely unlikely to compete in the four rounds prior to the GP of Indy, he will be remaining in top condition so he’s ready to hit the ground running for the IMS open test in late April.

“It’s going to be a bit of a different mental situation for me heading into 2020, but at the same time I’m preparing myself physically as if I’m going to be racing in St. Pete,” said the 33-year-old Canadian, who scored three of his six IndyCar wins while driving for Andretti Autosport.

“I’m going to be doing everything I can in the build-up to the Month of May to be as prepared as possible so when we hit the track, we’re right on speed.

“There’s a lot of development happening with the aeroscreen on the cars, but I’ve got a bunch of great teammates now who are going to help me get up to speed. Coming back to a team I’ve got a ton of familiarity with and who I’ve had success with in the past and bringing a partner like Genesys on board, and seeing their enthusiasm behind it and how much they’ve embraced this program, it’s awesome to see.

“So it’s a bit of a different outlook going into the season and knowing May is your first race, but I don’t think we could be part of a better program.”

Michael Andretti, who ran Hinchcliffe from 2012 through ’14, said it’s likely that the highly-rated Eric Bretzman will be race engineer for the #29 entry, and pointed out: “James fits in perfectly. When you have a multi-car team with a lot of different personalities, it’s important to not only have a fast and talented driver but a guy who’s going to be able to fit in with everybody. James is perfect for that.”

The choice of Texas Motor Speedway as the team’s third race “made a lot of sense both commercially and logistically,” said Hinchcliffe. “When you’ve got an extra crew running a car for the Month of May, Texas is only two weeks away. If you’re pulling crew members off an Indy Lights program that don’t run at Texas, you can keep the momentum of the Month of May going for two weeks longer.

“Outside of that, for a lot of our partners – not just Genesys – Texas is a big event, so it was always high on our hitlist. So when it made sense logistically too, that made [the decision] kinda easy.”

While Indy Lights’ absence from the Texas schedule enables Andretti Autosport to run a sixth IndyCar crewed by members of Andretti’s three-car Lights operation, and the proximity of the AA race shop to Indianapolis Motor Speedway actually allows the team to run all nine cars in the Month of May, the odds of doing the same for Hinchcliffe’s home race in Toronto have proven insuperable.

Indeed, due to IMSA races on the weekends immediately prior and immediately after the Toronto IndyCar race, there appears to be a dearth of qualified personnel from any team to run an extra entry for the local hero. Hinchcliffe thus sounded downbeat about his chances of participating in an event that has seen him twice finish on the podium.

“Obviously we want to have as many races on the schedule as possible,” he said. “Toronto definitely has a place in my heart and I think everyone would love to see that as well.

“The truth is, logistically it’s a very tough one to make happen for a lot of teams, and Andretti Autosport’s no different. Never say never. We’re always looking at opportunities to get the car on the track, but that one is uniquely challenging in a lot of ways, unfortunately.

“I’ll be there in one capacity or another. I’ll be supporting the event, promoting the event, and the trajectory it’s been on in the past few years has been growing and growing, and we have every intention of being there in 2021.

“If we don’t make it this year, please come and support the race. [Rookie] Dalton Kellett’s going to be in it [driving for AJ Foyt Racing] so a Canadian’s going to be in the race anyway, and hopefully we’ll keep the event growing and come back stronger in ’21.”

Regarding his first test of the season, Hinchcliffe said: “I’ll be at the IMS (oval) test in late April and that’ll be my first time back in an Andretti Autosport car, and in Genesys colors and behind a windscreen. So it’s going to be a big day.”