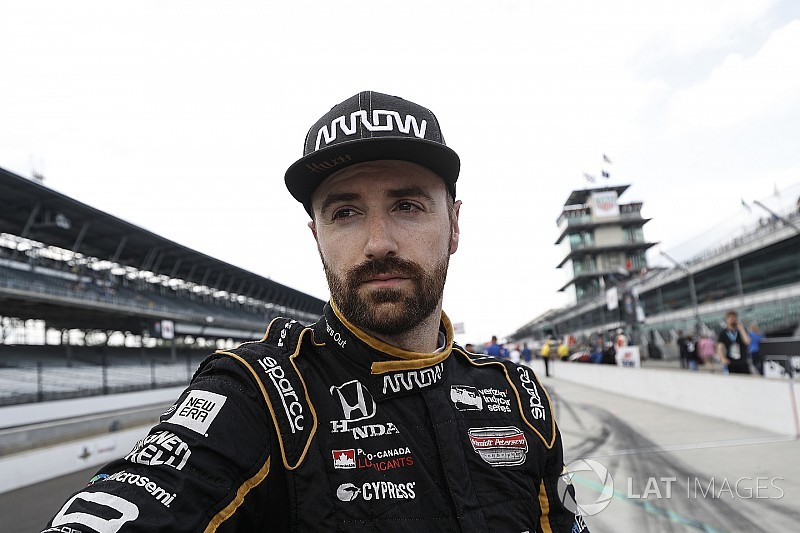 Schmidt Peterson Motorsports-Honda driver James Hinchcliffe says it is "devastating in every way possible” to be bumped out of the 2018 Indianapolis 500.

A disrupted first qualifying for the Indy 500 had two rain delays and Hinchcliffe completed his first run on a green track with increased humidity also slowing the cars.

That meant he progressively fell into the bubble for bumping and improvements from Oriol Servia and Conor Daly left Hinchcliffe – and Dale Coyne Racing’s Pippa Mann – in a battle to make the 33-car field.

He then suffered suspected tire vibrations on an attempted second run in the final 12 minutes that forced him to abort his attempt. Hinchcliffe then was in line behind Mann on her final attempt to make the race, and time ran out before he could take another shot at qualifying.

“[It’s] devastating in every way possible,” said the Canadian who suffered a life-threatening shunt at IMS in 2015, then came back to take pole here in 2016. “We had a tyre vibration, I'm not exactly sure what the problem is. It’s a bitter pill to swallow.

“Indy is a cruel mistress sometimes, the highs and lows. Everybody at SPM worked their tails off to get the car ready, three cars on show and, unfortunately, four didn't make it.

“It’s crazy to be here after where we were two years ago,” he said. “But we’ll put our heads down, we’ll take a look at it, and we’ll learn from this experience.”

Hinchcliffe added that he had not expected to make the 'Fast Nine' and teammates Jay Howard, Robert Wickens and Jack Harvey all qualified outside the top 15.

“We had a bit of a problem in our first run. The second run [it] looks like the track was getting a little bit cooler, a little bit quicker, but we had that [vibration] problem.

“Honestly, in the car, I thought the gun went at 6pm, so I wasn’t really worried about it. We just didn’t get out in front of Pippa there. It’s the rules. It’s how it goes.

“We’re not the first big name, big car to go home in this race. That’s Indy. We finally have bumping again, which everybody was super-thrilled about. I’m a little less thrilled about it than I was 24 hours ago. You’ve got to take your lumps here sometimes.”

Hinchcliffe is fifth in the 2018 IndyCar driver standings, meaning that his season could be severely damaged by missing out on the double-points Indy 500.

But the car – not the driver – qualifies for the race, which means that SPM could place Hinchcliffe in one of its other part-time entries. One-off entrant Howard is the most likely contender to be replaced if an agreement can be reached.

The team's fourth driver, Harvey, is running a part-season through a partnership between Michael Shank Racing and SPM.