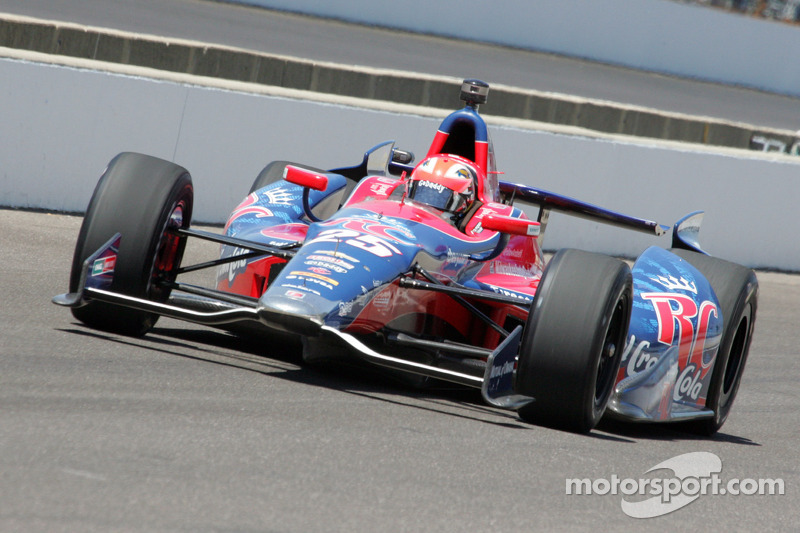 The lap times on the Indianapolis Motor Speedway will heat up as Fast Friday approaches; of course that will depend on the weather gods.

Tuesday practice at Indianapolis Motor Speedway has turned into a good one – the skies are clear, the temps have risen to tank-top-and-flip-flop levels, bringing 34 primary and backup cars to the 2.5-mile IMS oval in preparation for the 97th annual Indianapolis 500 Mile Race.

James Hinchcliffe set the early mark in teammate Marco Andretti’s No. 25 Dallara/Chevrolet/Firestone race car at 224.210 mph, thanks to a tow from Graham Rahal. With two hours remaining, no one else has been able to beat his mark, as Hinch returned to his own car, trying to match that speed but falling even a bit short of Marco’s best in the No. 27 GoDaddy machine. Marco turned 221.972 in Hinch’s race car while James’ set was 221.781.

At 4PM, with two hours to go, the fastest four cars are all Chevrolet-powered, as JR Hildebrand’s early lap of 223.652 was good for second, reigning champ Ryan Hunter-Reay turned 223.332 and EJ Viso signed in at 223.138 mph. Three of the four top times come from Andretti Autosport – kind of like Sunday and Monday’s quick laps.

Josef Newgarden spearheads the Honda brigade at 223.123 mph and, in fact, you’ve got to look all the way back to 17th place to find the next Honda-powered machine of Charlie Kimball (220.722). Of course Indy is a place where everyone has their own program to prepare for the 500 and it’s possible that some are waiting for Wednesday to bring out some speed for qualifying weekend.

That brings us to the W word, for weather. All signs from the NOAA’s site point to thunderstorms that are supposed to begin Wednesday night and continue through the weekend. Nothing unusual but hopefully they travel either north or south of Speedway, IN. The chances cited are at 50% through Thursday night with a lessening to 40% through Pole Day on Saturday.

With that kind of forecast, we can assume that Wednesday, which is supposed to be sunny and quite warm, will breed more qualifying attempts and a lot more pack running, depending on where people are in their programs by the end of Tuesday’s activities. Buddy Lazier, whose program is being run by Eric Bachelart, still hasn’t shown up on the racetrack but it would seem imperative for his group to get their collective acts together by Wednesday.

As Happy Hour got underway with 18+ mph winds changing direction on a regular basis, the Andretti Autosport team returned to their drafting exercises, changing position as they searched for the right amount of aero and mechanical grip for overtaking exercises on race day. By this time Helio Castroneves set the third quickest lap of 223.556, helping to shuffle the order a bit.

In the garage area, there were engine swaps going on as teams maxxed out their engine service life and needed to install new Chevy or Honda mills. Many team engineers told me the winds had been playing havoc with them, but it was still imperative to run in this weather because you never knew what would greet you on race day a week from Sunday.

With less than 15 minutes in practice, Marco Andretti moved up to third place, pushing the balance of the field back into line and leaving Newgarden seventh as fastest Honda. He and Hildebrand continued to be the “meat” in an Andretti Autosport sandwich.

When the checkered flags flew, it was Hinchcliffe’s ride in Andretti’s car still at the top, followed by Hildebrnd, Andretti, Castroneves, Hunter-Reay, Viso, Newgarden, rookie Carlos Munoz, Oriol Servia and Indy 500 rookie AJ Allmendinger making up the top 10. Slowest on the day was out point leader Takuma Sato, who did only 20 laps with a best of 216.616 mph.

Still we don’t know what people are doing out there – like they’re going to tell us? – and with weather coming in tomorrow night, it’s going to be a crap shoot to see whether people do their qualifying simulations on Wednesday or not. Added boost comes to the teams – as it did in 2012 – on Friday through the weekend, and both of the fast drivers today, Hinchcliffe and Hildebrand, indicated their teams don’t intend to start those simulations until at least Thursday.

There were 32 drivers on the track today, according to INDYCAR.

Back to the future for IndyCar's new competition and operations director

The Mayor of Hinchtown ruled in Speedway today