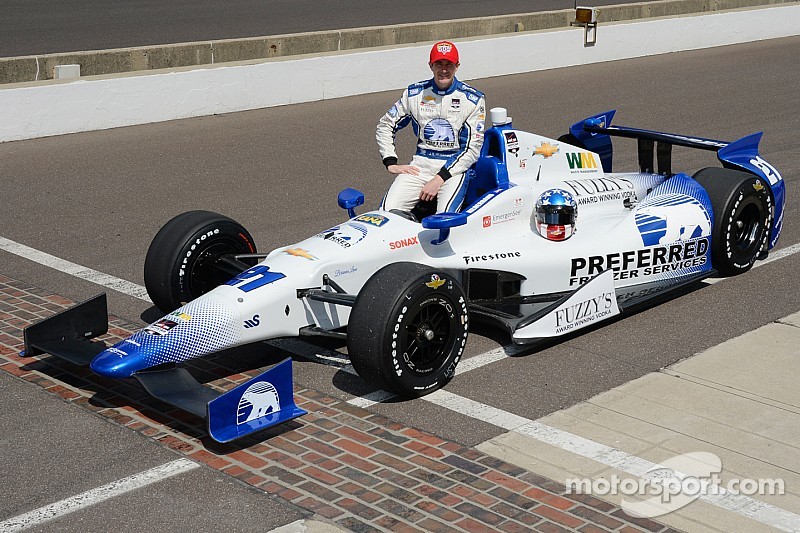 JR Hildebrand will make his 2015 debut at Indianapolis in May.

JR Hidebrand will return to the grid after making one IndyCar start in 2014, doing so for Ed Carpenter in the Indianapolis 500, finishing 10th. The team, now known as CFH Racing after merging with Sarah Fisher Hartman, will field another car for Hidebrand in this year's race, plus the Indy GP.

The team officially revealed the 2011 Indy 500 runner-up as the driver of the No. 6 Preferred Freezer Services CFH Racing Chevrolet Dallara. He will race alongside Josef Newgarden and Luca Filippi in the three-car fleet. Ed Carpenter earned pole position for the event in both 2013 and 2014, driving his own car.

Having a race under our belts going into the 500 is a huge difference from a one-off scenario.

“It was really great working with Ed last year at the 500 and I did a little bit of testing in the offseason with Josef; we got along really well,” said Hildebrand, aiming for his fifth Indy 500 start with a best previous finish of second in 2011. “I expect the relationship that the three of us have to be potent and for us to have great communication. That’s such a huge piece, particularly at the 500, where there is so much practice, qualifying is so intense and we’ll have the new aero kits. You need every last ounce of speed you can get out of the cars for both qualifying and race day, and we can all work together to reach that goal.”

Hildebrand comments on running GP, prior to 500

“To have the grand prix added onto the 500 program is great,” he said. “Having a race under our belts going into the 500 is a huge difference from a one-off scenario. It can be tough sometimes when you have guys who haven’t done pit stops as a group during a race and you don’t have that chemistry yet. It will be great for my team of guys to have a warmup heading into the oval race and great for me to get back in a car on a road course.”