Firestone GP of Monterey winner Colton Herta says he’s in two minds over the rule that allows would-be lapped runners to hold up the leaders in order to stay on the lead lap.

Herta, who led 91 of the 95 laps, was under greatest threat during the race whenever he reached backmarkers, allowing championship leader Alex Palou to close up to within a second of the Andretti Autosport-Honda.

Asked by Motorsport.com if he felt it was time for IndyCar to wave blue flags at backmarkers and encourage them to move aside, as in other topline race series, Herta replied: “Yes and no. In the car, if you were to ask me, I would have said, yeah, like 100 percent we need blue flag.

“But I think from, like, the consumer aspect, it makes the race more interesting, especially when you come to a place like this, that's so hard to overtake. You're either waiting for your tires to drastically fall off, which never happens for the top-running guys, or something like [traffic].

“It made the race interesting at the front. Before that, I had a six- or seven-plus-second lead over Alex for a lot, first half of the race. That really clamped it down and brought him right to me. It was something new for me. I'd never really had that in IndyCar, where I was lapping people and struggling to lap people [while also] having a car that I'm having to defend from.

“It definitely made it more stressful, but it makes the race more fun. In Detroit when that happened, I wasn't in the position to win. I think I was, like, third at that time, it was even more fun.

“When you're leading, it's not as fun. Any other place it gives you an opportunity to win, which that's what IndyCar racing is about, right? You can win from anywhere. Like we saw [Romain] Grosjean started 13th and finished third. I think it's a part of IndyCar racing that's always kind of been there.”

Herta admits he had been surprised to see Grosjean on the podium, given that the Dale Coyne Racing with RWR-Honda started 13th.

“I was very confused on how that happened, especially at this place, right?” said Herta. “I think he was in a perfect position to use that strategy of using his two sets of new reds [having failed to reach the Top 12 in qualifying]. He used it very nicely.

“The tire situation was so interesting. The used reds were dropping off and falling off by lap 11, whereas the new reds you can run until lap 20 and still be pushing after that. I don't think I've ever seen a deficit that much between two-lap-old reds versus brand-new reds, a 10-lap difference in deg[radation], which is pretty crazy.”

Late in the race, Herta radioed to his strategist and father, two-time Laguna Seca winner Bryan Herta, to check his front wing as he’d hit an animal on the climb from Turn 5 to Turn 6.

“It was either a squirrel or a bunny, I don't know. Last time I was here there were a lot of squirrels on the track, so I imagine it was one of those guys, unfortunately.

“But he came along with me to win the race, so... He's won an IndyCar race. He's got a lot more than a lot of IndyCar drivers!

Herta agreed that the squirrel on the front wing crossed the line ahead of him, adding, “Yeah, he really won the race.”

He also said that the Sunday morning warm-up “wasn’t very useful” because it had been held in misty and cold conditions, and that the changes the team made overnight from qualifying to the race had used knowledge based on his previous victorious drive at Laguna Seca in 2019.

“We had a good idea of what we wanted to do based off of 2019, then based off of what we see the aeroscreen do during races, too. Kind of a hybrid setup we came up with between the two.

“It worked good. I don't think it was excellent. There's always stuff we can work on. But I do think we had the best car today.”

Herta’s only obvious mistake in the race came on Lap 2 when he ran wide through Turn 4, and lost momentum, allowing fellow front-row starter Alex Rossi to draw alongside him on the run to Turn 5. Herta took the racing line, Rossi went up the inside, but on the exit of the corner, Rossi’s right-front wheel touched Herta’s left-rear, and Rossi spun off the track, stalled and went down a lap.

“I dropped a wheel in Turn 4, and he got a run on me,” said Herta. “I partially defended. He chose to go to the inside… I haven't seen a replay or anything. From my point of view, I gave him enough room. I think he walked up the track, got loose on the curb inside.

"Then I felt contact in my left rear, then I saw him spinning to the inside. That's what I would imagine happened. I haven't seen anything, so I can't really say if I'm right or wrong.” 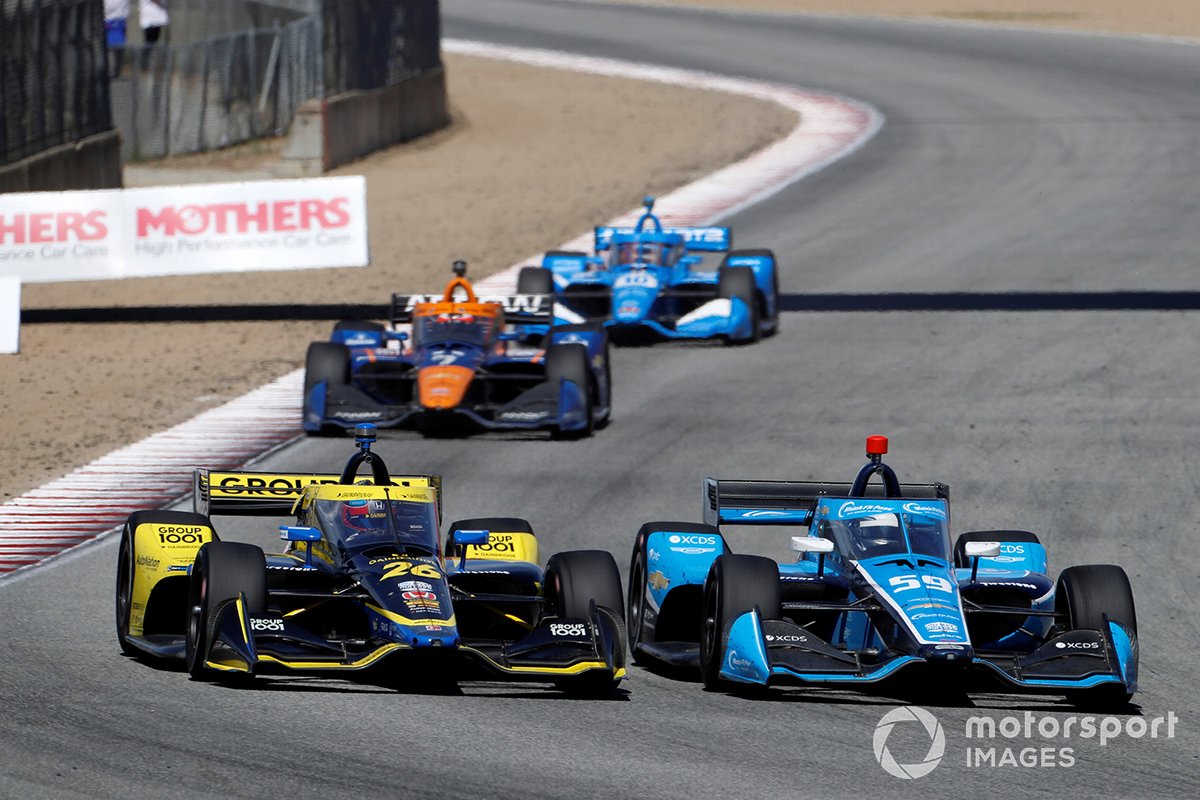