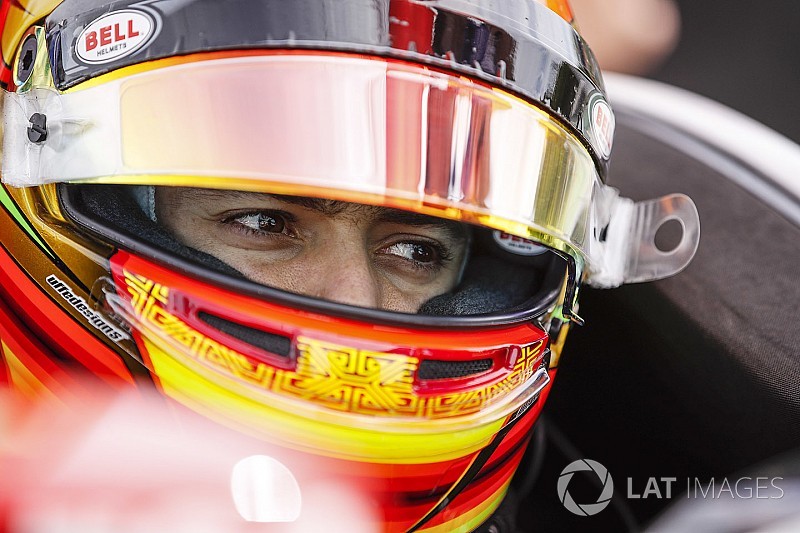 Gutierrez, who made his IndyCar debut for Dale Coyne Racing-Honda in the Detroit street race double-header, was unable to have a rookie oval test before the following week’s race at Texas Motor Speedway, where his place was taken by Tristan Vautier.

However Gutierrez returned to the team for last Sunday’s race at Road America, having been confirmed as the #18 car’s driver until the injured Sebastien Bourdais is able to return.

Today having, completed his rookie oval test at the 0.894-mile Iowa Speedway in Newton, Iowa, Gutierrez is satisfied with the progress he made.

He told Motorsport.com: “It’s not so much physical but it’s demanding on the mind, at a short oval. All the time you’re cornering and all the time the Gs are on the left which is something I’m not used to.

“But one thing I really liked was that you could feel every single technical change and every single movement of the car. That really helps you to understand how everything is having an effect on the car.

“Actually, considering this, I would recommend any driver to experience this kind of thing in a test because it really does improve your knowledge of everything that is being changed in the car. It was pretty interesting, a good education.”

“No, today was about getting me comfortable running alone first,” he said. “We did fairly long runs but not a full race distance yet and that was to focus on trimming the car, step by step.

“Obviously I went with pretty high downforce at first just to get comfortable with the track and to get flat on the throttle, and I did that, which was good news!

“But then as the downforce started coming off, I started experimenting with different lines, and learning that you have to hit the bumps square! I also tested how things change with tire degradation – I did a run of about 60 laps, or a bit more I think – so I could feel how the grip goes away.

“It can get a bit loose or you start to get a bit of push as you start to use up the front tires, and I learned how to take the corners where you’re hurting the tires the least, so they last longer.”

Gutierrez said that although the test came just two days after racing at Road America, he had crammed in as much preparation in as he could, right up to this morning.

“Adrian Fernandez and Ed Carpenter this morning took me for a ride around the course before starting the test,” he said, “and Ed Jones, my teammate, also gave me some tips, things it’s important to know. Plus I had watched a lot of videos of the races here, studied data. Then for the first hour of the test, I went up to the stand with the spotters and looked down at the different approaches that drivers were taking to the corners. That helped me a lot.”

Gutierrez said that he had already got to the stage of experimenting with the steering, as several drivers like to set it up so they appear to be steering to the right along the straight, and then relaxing their hold and steering ‘straight’ into the turns.

“Yes, I did test that a bit,” said Gutierrez, “but I didn’t get to the point where I was straight for the corners. But I was doing some tests to see if that’s a direction I want to go with my setups. We will make more adjustments for next week.

“I’d say I got halfway between a full downforce setup and a trimmed out level. And actually, I found the car a bit easier to understand, more predictable, as the downforce level got lower. Every time we trimmed, I felt more comfortable.”