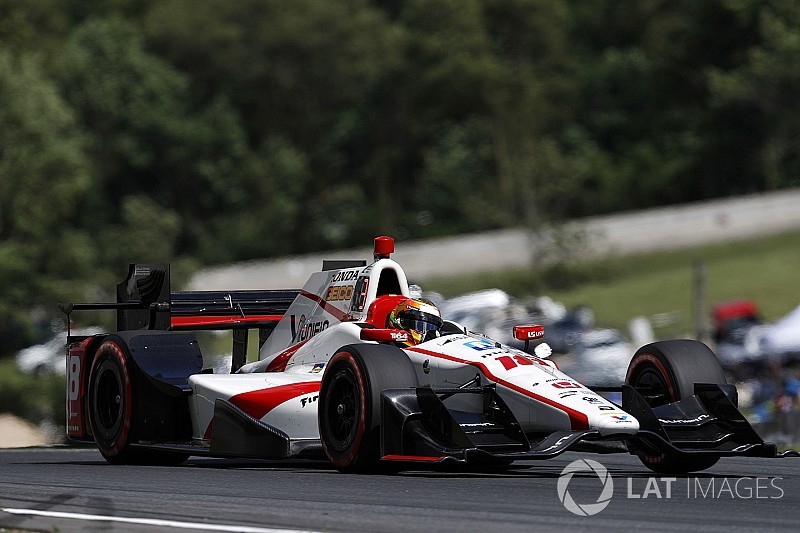 IndyCar’s latest rookie, Esteban Gutierrez, says he was puzzled by the handling of his Dale Coyne Racing-Honda but believes he emerged from the Road America weekend with a better understanding of Dallara IR12s on road courses.

Gutierrez, subbing for the injured Sebastien Bourdais, had previous experience of Road America from his Formula BMW season 10 years ago, and also tested with teammate Ed Jones at Road America last week.

In qualifying, Gutierrez’s best lap was 0.38sec slower than Jones and he didn’t make the cut to progress into Q2, but starting from 17th on the grid he made rapid early progress, only to be stymied by understeer.

“It was a crazy race,” he said. “I had a good start and we tried to find the right balance in the car.

“Then I started to have a lot of understeer in the car and I struggled to find the pace, and a good balance. I was not feeling comfortable in the car at one point.

“I had to pit a few times to change the front wing to try and see if there was any damage or anything. It was hard to understand what was going on.

“It was a very tough race but I think we have to move forward and use this as an experience and keep working hard. I definitely learned quite a lot out there.”

Jones, who was wearing helmet colors that paid tribute to Dale Coyne Racing co-founder – NFL Chicago Bears legend, Walter "Sweetness" Payton –  moved back into the Top 10 in the championship with a composed drive to seventh. However, he admitted that his race, too, had been a struggle at times.

“The car was loose but fast for qualifying," said Jones, "and it was really loose again on Sunday – I was hanging on throughout the race!

“Most people went for a similar strategy, but the DCR boys did a great job and some good pitstops helped us to progress through the field.

“Everyone was aggressive and it was hard racing, but we came out with a seventh-place finish and moved up a little bit in the points, so we’ll definitely take that.”

Both drivers will test at Iowa Speedway tomorrow, when Gutierrez is aiming to complete his rookie oval test.