Although he finished only 14th, partly due to the unfortunate timing of a yellow flag and a strategy switch, the ex-Formula 1 driver kept the #51 Dale Coyne Racing with RWR-Honda off the SAFER barriers at the 1.25-mile World Wide Technology Raceway. This was despite a couple of moments where he drifted into the marbles and lost speed as he cleaned off his tires.

He pulled off several memorable passes on the inside and outside of rivals, climbing from his already impressive 14th spot on the grid [he qualified 15th but Alex Palou suffered a grid penalty] to run a legitimate ninth.

“We tried a strategy that didn’t quite go our way,” said Grosjean immediately afterward, “so the end result isn’t as good as our race, but we had a fast car, we learned a lot.

“I made a couple of mistakes on cold tires and got into the marbles, but I was able to save it and I managed to make some good passes.

“I’m happy with this first oval race, I’m a little dizzy right now but tomorrow should be better.”

Now Boisson has told Motorsport.com that his driver’s on-track progress, along with the way he worked his in-cockpit tools to finesse the car’s handling has convinced him that Grosjean can also take on the Indianapolis 500, Texas Motor Speedway and the returning Iowa Speedway event next year. Asked if he would feel confident about tackling all the oval tracks with Grosjean next year, Boisson responded, “Oh definitely, yeah.

“You never know if a guy from Europe is going to have it for the ovals or not. Santino [Ferrucci] was a good surprise for us because the ovals seem to come naturally to him.

“Romain is a little like that. When you saw the passes he did inside and outside, and how he got stronger on the restarts, and was really going for it and having a good time, yeah, I’m definitely not worried about him racing any ovals. There’s no question he can do it.”

Boisson said he suspected Grosjean would be strong on ovals, based on his left-turn-only initiation at the 11-car Gateway test he ran at the end of July, but his progress still surprised him.

“He didn’t take long to get comfortable on the oval,” he recalls, “so he is definitely a quick learner. There’s no doubt about that. But racing an oval is quite different so there was a little bit of apprehension on his side and our side before this weekend. I didn’t know he was going to be so comfortable so soon into the race and would be confident enough to make all those passes on people: that was impressive.”

Boisson, who reckons Grosjean would have finished “seventh or eighth” with a better strategy, denied that he was nervous as Grosjean attacked the oval veterans.

“No, no, not too much!” he said. “I was looking at the telemetry and could see the steering wheel was not doing something I don’t like. I was fine about him doing stuff.

“A few times he got himself in trouble but he was catching it, which is good! The few times I came on the radio it was just to say, ‘OK, maybe it’s time to just calm it down a little bit,’ or, ‘Hey, I don’t really like that front bar in that position there, can you think about changing that so the car doesn’t go snapping on you?’ I was just keeping an eye on all the tools and steering traces, because it was getting exciting in the car. I wanted to make sure someone was watching all the basic stuff so we don’t do anything stupid.” 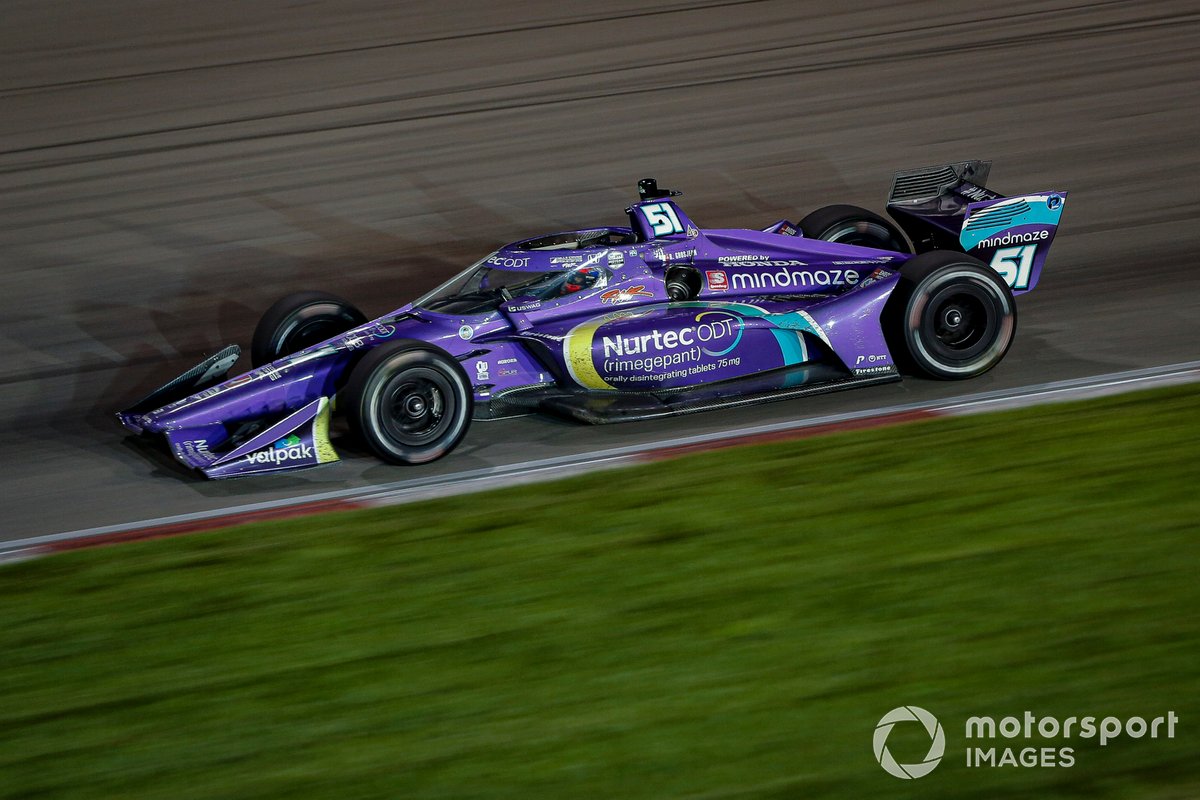 Setup-wise, Boisson admitted he went in the typical direction for those prepping a car for an oval rookie, building in more push than was run on teammate Ed Jones’ DCR with Vasser Sullivan entry.

“They were pretty similar but I tried to make it a little bit more conservative than Ed’s car, being Romain’s first oval,” he said. “I told him, ‘You may feel that it has a little too much understeer but I know you can deal with it and I don’t want it to go loose for you.’ As we saw later in the race, as the track cools, on cold tires it gets very hard for a few laps.

“If we had optimized the car it could have been a little bit faster but I was just trying to make sure we kept it more on the comfortable side.

“It was a one-day event – 90 minutes practice and then straight into qualifying, and then the race. And so what we qualify with is how we race the car as well. So definitely kept it on the safe side for him on purpose. In qualifying over two laps, you’re going into the unknown on the first lap. He pushed really hard in Turns 3 and 4, thinking, ‘OK, maybe I can be flat through here,’ and he tried it and discovered no, he had to lift a little bit.

“We talked about qualifying a lot and what he had to do with the tools in the car and how he’d have to change the bar for each end of the track based on wind direction. We tried to coach him and he picked up really quick, because in the race every lap he was changing his bars for Turns 1/2 and Turns 3/4. He was quite tired afterwards but yeah, he recognized that was the only way to keep the balance good at both ends of the track. So that was impressive too.”

Boisson and team owner Dale Coyne decided pre-race not to burden Grosjean with fuel worries, preferring to let him just push and explore.

“With all that yellow, a lot of people at the start of the race started saving fuel so they could go to a three-stop strategy,” said Boisson. “For Romain’s first race on an oval, instead of a boring fuel-saving race, we decided to just let him go, let him learn, and never really asked him to save fuel.

“At the end of the day the goal was to finish. I talked with him at length before the race and said that to gain proper experience of an oval, you have to race all the laps. Testing on ovals or even the practice session is just not the same. So the idea is to get through the whole race, and that mission was accomplished.

“I think it was a good experience for him and he put on a show.”

Newgarden: IndyCar driver aggression over the edge at times