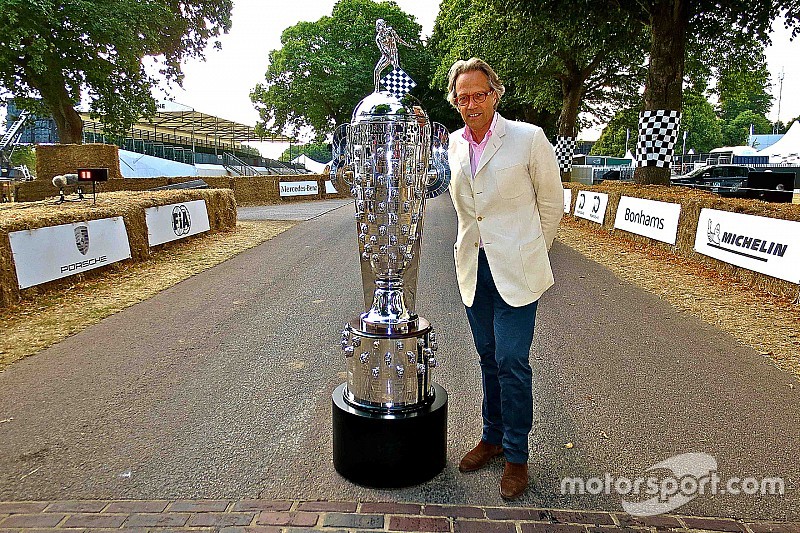 The Duke of Richmond, Charles March, says that having the Borg-Warner Trophy and bricks from Indianapolis Motor Speedway at the Goodwood Festival of Speed leaves him “very thrilled and very honored.”

March has long been a fan of the U.S. motorsport scene and both the Festival of Speed and the Revival (on the Goodwood circuit) regularly feature historic and modern cars and stars of IndyCar, IMSA, NASCAR, Can-Am and Trans-Am.

This year, in honor of the Festival’s silver jubilee, the legendary Borg-Warner Trophy, which commemorates the winners of the Indianapolis 500, has been transported outside the U.S. for only the second time in history. The Duke said that he first saw the trophy for real in 1993, the same year he started the Festival.

“When we started the Goodwood Festival of Speed we certainly hoped we’d do something people would really love,” he said. “We had no idea it would be such a success. I never guessed that people would feel so strongly about the event and keep coming back. I can’t believe this is our 25th anniversary, our silver jubilee year.

“I’ve obviously seen the fabulous Borg-Warner Trophy in the United States. I was at Indianapolis in 1993, a very important year for us, the first year we had the Festival of Speed and it inspired me with lots of great ideas actually.

“I can’t believe the trophy is now here on the starting line, with some of the bricks from the Brickyard which makes it even more special. We are very thrilled and very honored to have it here with us.”

March also paid tribute to the late Dan Gurney, a regular and very popular visitor to Goodwood over the past quarter-century.

“One of my fondest memories is when Dan came very early to the Festival of Speed with the Eagle – that was a big one for me. I remember Dan racing here in the 1960s. He was such a wonderful man and we all miss him.

“We’ve also had some of the world’s greatest Indy cars here over the years. That’s where we’ve been so lucky. We’ve seen all sorts of cars and all forms of motorsport from around the world represented and celebrated here, and that makes it a very special place.”

You can watch live streaming from this year’s Goodwood Festival of Speed here on Motorsport.com from Thursday through Sunday.