IndyCar president Jay Frye says the series will examine its rules regarding blue flags, following leading runners expressing their frustration over the behavior of backmarkers.

While NTT IndyCar Series drivers are generally considerate in qualifying, so their slow-down laps don’t interfere with flying laps by rivals, current race etiquette allows slower or delayed drivers to fight the leader to avoid getting lapped. By doing this, they are hoping for a caution period which will bunch the pack and allow them to rejoin the tail of the field while still on the lead lap.

Rule 7.2.5 states a Blue flag “signifies that an approaching Car is attempting to overtake.” Rule 7.2.5.1 in the IndyCar rulebook states, “At Road/Street Course Events – When displayed from the starter’s stand and ordered directly by IndyCar (command blue), directs a Lapped Car to immediately give way to the overtaking car.”

If IndyCar applies this rule, therefore, a driver must make way for the second-, third-, fourth-placed cars, etc. since he has already been lapped by the leader. However, it does not militate against a driver resisting the leader in order to stay on the lead lap.

This bone of contention came back under the spotlight during the Grand Prix of Indianapolis on the IMS road course, when Dale Coyne Racing with RWR-Honda’s star rookie Romain Grosjean found himself twice banging wheels with the delayed Takuma Sato as he attempted to put a lap on him, and later losing time behind Sebastien Bourdais’ AJ Foyt Racing-Chevrolet. The surprise polesitter had to settle for second behind Ed Carpenter Racing-Chevrolet’s Rinus VeeKay.

Afterward, Grosjean was restrained in his comments, stating that “traffic cost us the win,” and that backmarkers being able to defend using their push-to-pass boost was “annoying”. But others rallied to Grosjean’s defense, describing it as “frankly ridiculous” that he had lost the chance to fight for the win.

“This fight to stay on the lead lap has always gone on,” one leading driver told Motorsport.com, “but it’s getting more and more pointless because we don’t get many cautions these days, so the chances of getting back to the tail of the pack probably isn’t happening.

“So there’s two ways to tackle the problem: either IndyCar gets really tough – you get shown a blue flag at each corner, and if you haven’t responded to it within four or five corners, you’re getting a 10sec penalty, you keep on ignoring it, you get a drive-through penalty.

“But the best way is to tell drivers if they’re shown a blue flag to let the leaders through, and if there’s a caution, they’ll get a wave around to the back of the pack – they’ll get their lap back. Then they wouldn’t fight against the leaders.

Regarding this matter, Frye told Motorsport.com: “We look at that type of thing all the time – how it can be better, or what effect it will have – and that’s true of everything we do.

“But if we can’t find a better solution, something we have more consensus on, then we should leave it like it is.” 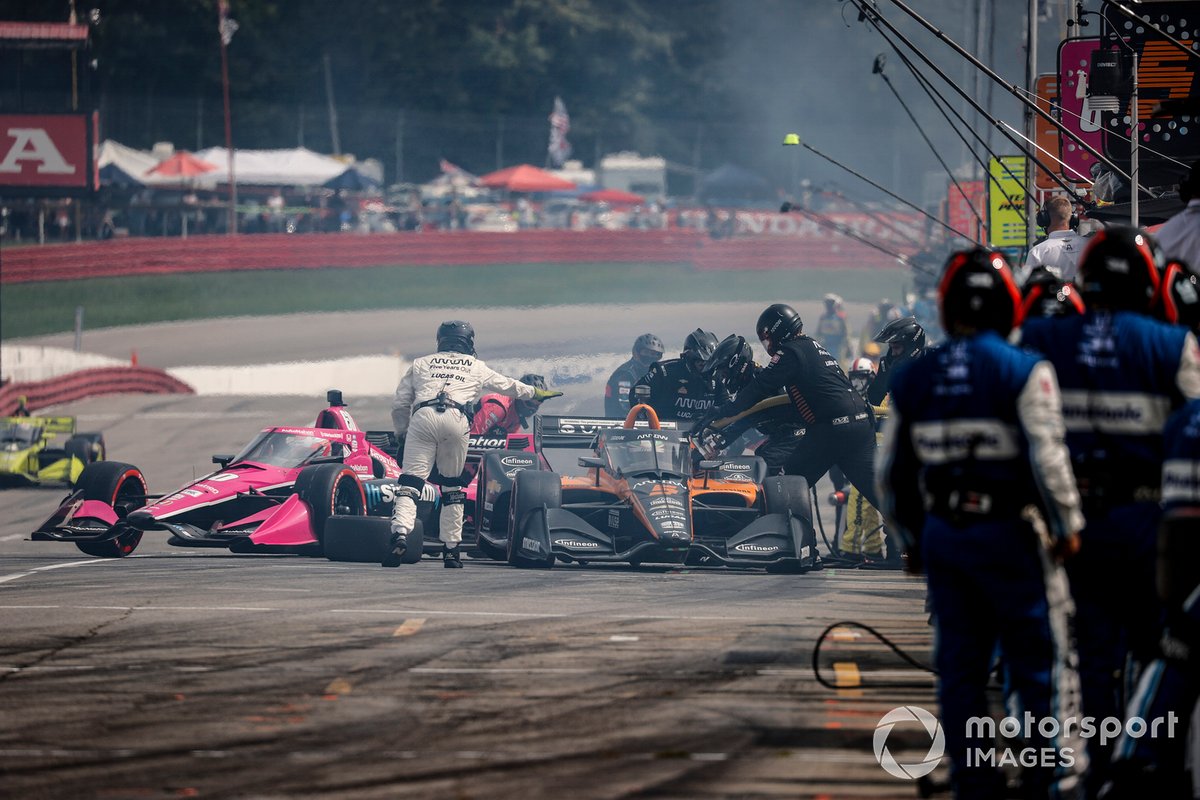 On the subject of changing the automatic “closed pits under full-course caution” rule, Frye said that again, it’s a procedural rule that is closely monitored.

“We’ve got some good ideas and we’ve heard some good ideas,” he said, “but whatever we do, we have to apply it and make sure we do it flawlessly. If we can’t get it right, we won’t change it, because we currently have a system in place, and we know what works and what doesn’t work.

“I think Kyle [Novak, race director] has done a great job of trying to delay yellows that occur around pitstop time, so those who have not yet pitted don’t get their race affected badly by us closing the pits. But safety is our main priority, and if we can’t delay it, then the yellows will get shown and the pits will close. That’s it.

“If it appears we can delay the rescue for a car that’s just spun off and needs fired up, then we will delay. You’ve seen Kyle do that a number of times over the past couple of years so that the leaders who have made their fuel or tires go longer don’t end up put at the back for the next restart.

“Again, there’s a lot of opinions as to what we should do going forward. The good thing is that the 2023 car with the hybrid unit will be able to get moving again – so that means fewer risks for the AMR Safety Team, safer for the driver as well, and less chance of the need for a yellow.”

The pits-closed-under-caution rule was introduced to stop drivers rushing to the pits, possibly through the incident/accident scene, thereby risking themselves, the drivers in the stricken car(s) and the Safety Team.

Several drivers have been convinced by the merits of a potential alternative procedure. The idea is that all cars are fitted with a secondary speed-limiter – like the one set for pitlanes but at a slightly higher speed (as per the two-stage pit speed limiter used in Texas) – which a driver must hit within three-four seconds of a full-course caution being thrown.

Then all cars would be limited to the same low speed, gaps between cars would be maintained, and cars that have not yet pitted would get a chance to do so. Once these stoppers had emerged from the pits, all cars would then pack up behind the safety car for a restart, but in the “fairest” order.

This suggestion has an additional safety benefit for pit crews. Because the current system bunches the pack behind the Safety Car while pitlane is closed, once it is open the cars arrive nose-to-tail, obviously increasing the chance of a collision due to driver error, thereby putting the outside rear- and front-tire changers at even more risk should. This is of particular concern at tight pitlanes such as Mid-Ohio or Long Beach.