From pole to victory, Dixon dominated Race 2 in Toronto 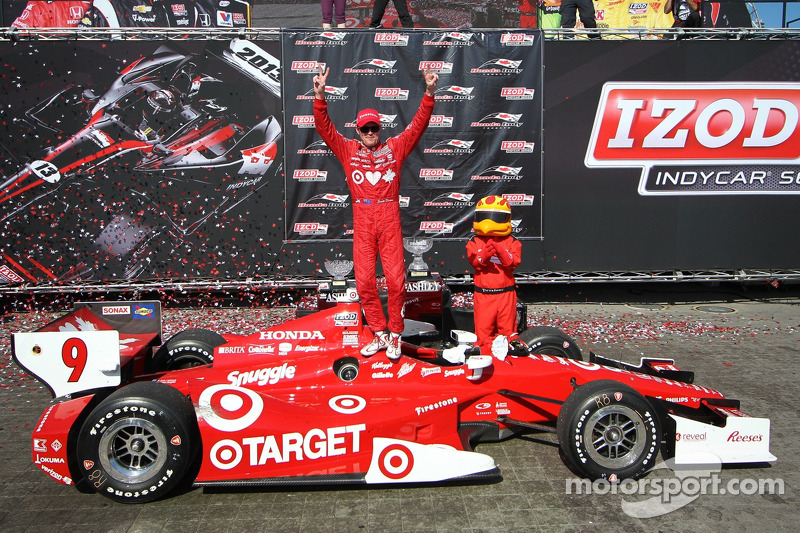 Chip Ganassi’s Scott Dixon had a near perfect weekend on the Exhibition Place street circuit in Toronto. The Kiwi leaves Canada with one pole and two race wins.

Scott Dixon's on a roll - if you thought last weekend's fuel mileage-aided win at Pocono was a fluke, Dixie pretty much threw that in the weeds with his flag to flag victory with today's third straight victory in the second of two Honda Indy Toronto races called #2inTO.

Dixon had it his own way for Sunday's entire 85-lap event around Toronto's Exhibition Place, a 1.75-mile track with 11 turns that is normally a crash-fest. Today's contest was a festival of green flag running until nearly the end; it wasn't until lap 64 that the caution flags flew when James Jakes threw it into the turn 5 barrier. As so often occurs, caution begat caution as they went green on the 71st lap and boom! Ed Carpenter put it into the same barrier on the 80th tour.

That left a two-lap shootout and it took only two corners for that to disintegrate. The field made the right turn past Princes Gate but champion Ryan Hunter-Reay pushed Will Power, leaving the two of them parked, along with Takuma Sato - and Dixon on his way to a second consecutive victory in two days.

Championship leader Helio Castroneves was second, Sebastien Bourdais earned his second podium of the weekend - and Dragon Racing's second all-time - while Dario Franchitti rebounded from a first lap encounter with Power that dropped him to the rear, to finish fourth. Maybe.

When he pitted after the first lap Franchitti switched to black tires after starting the race on alternate red Firestone rubber, but never used the alternate tire again. The rules say drivers have to work at least two green flag laps on alternate Firestones, but in the case of a doubleheader like this, that requirement is waived, according to Kevin Blanch of INDYCAR. 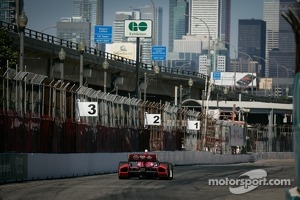 EJ Viso took fifth place, while alternate-shod Charlie Kimball was sixth, Mike Conway was 7th (making up 16 places!), Justin Wilson (on reds) took eighth, Marco Andretti and Alex Tagliani rounded out the top 10. That meant six Honda-powered cars in the mix and four Chevrolets. For Canadian Tagliani, it was a much-needed boost.

Subbing for the injured Ryan Briscoe, who fractured his wrist in yesterday's race, Firestone Indy Lights points leader Carlos Munoz came in with zero time in an Indy car on a road course. Yeah, he qualified on the front row for the 97th Indianapolis 500 and finished second, but this is a very different animal. Munoz drove a studied race to finish 17th, one lap down.

Hometown hero James Hinchcliffe had problems even before the race started when his throttle stuck. His team worked hard to get Hinch back in the contest but he was forced to finish an uncharacteristic four laps down. It seems Hinch either finishes first or not at all…

Sunday, however, belonged to Kiwi Dixon, the 2003 and 2008 champion who now has 32 wins on his resume, taking possession of 7th place on the all-time list and becoming the winningest active IZOD IndyCar Series driver.

With the long green flag period from the first lap to the 64th, Dixie was able to pull out quite a lead between the pit-stop shuffles… can we say checking out? His lead went up and down with the pit stops but the average appeared to be in the 7-9-second range!

In Victory Lane, Dixon took home the Sonax Perfect Finish award of $100,000, an initial $50,000 prize that rolled over from Detroit when Mike Conway was unable to win both of the doubleheaders. He did it in great style and moved into second place in the standings behind Castroneves - he was in 4th before Pocono! The tally is 425 to 396, with Hunter-Reay third, Marco Andretti fourth and Simon Pagenaud fifth.

On the massive rear wing of the No. 9 Target Chip Ganassi Racing Dallara/Honda/Firestone Indy car, there were three logos this weekend: the Target bullseye, a heart and the maple leaf emblem of Canada. If Scott Dixon loves Canada, as the car said, there's no need to wonder why.

Three in a row for Honda at Toronto