Franchitti excited by prospect of Rosenqvist in IndyCar

Chip Ganassi Racing’s driver advisor Dario Franchitti says he’s excited by the prospect of Felix Rosenqvist on the team next year, but has also defended the departed Ed Jones who endured a difficult 2018 season.

Franchitti, who claimed three of his four IndyCar titles and two of his three Indy 500 wins with Ganassi’s team has filled an advisory role for the squad since his enforced retirement from the cockpit over five years ago. He will therefore be working closely with Rosenqvist who joins CGR as a rookie for 2019, but has won races in almost every open-wheel category in which he’s competed, including in a part-time Indy Lights campaign in 2016.

Said Franchitti: “He’s a different character [than Jones]. Felix is feisty and I don’t think he’s intimidated by much.

“He’s got a lot to learn, no question about it, but he’s clearly got loads of talent. He’ll have to work hard to learn about the ovals, but he’s absolutely more than capable of it. He’ll be fun, and it’ll be exciting to watch how he develops.

“Obviously as a TV commentator for Formula E, I’ve been watching it carefully and he did a phenomenal job there. And he impressed everyone at Ganassi in the two tests he did with us at Mid-Ohio.

“Yes, those tests were with the manufacturer aerokits, but Felix was also very good at Barber last month with the current car, so I don’t anticipate any issues for him. The thing is, it’s up to every driver to develop a driving style that works with the car they’re given and I think he will. He’s used to driving all kinds of cars – F3, SuperFormula, Indy Lights, Formula E, GT cars, and so on – and he’s been impressive in all of them, and those experiences will be very helpful.

“Also, because the manufacturer aerokit tests were quite a while ago, he’s coming to this car with not much experience but also no preconceived ideas and without a lot to un-learn. So listening to his feedback after that Barber test was pretty interesting, because of the things he was picking out to highlight as a rookie.”

Jones “gets better with time”

Franchitti also moved to defend Rosenqvist’s predecessor, Ed Jones, who in his sophomore IndyCar season but his first with Ganassi, scored two podiums and finished 13th in the points standings.

“Ed’s a driver that gets better with time,” said Franchitti. “He’s not a driver who gets out there and does the job on his first flying lap. He builds up to it, and often you don’t have time to do that.

“And to be fair, all of the drivers who have been in the team recently – Ed, Charlie [Kimball], Max [Chilton] and even TK [Tony Kanaan] – have been somewhat shocked by what Scott does, what he’s capable of. 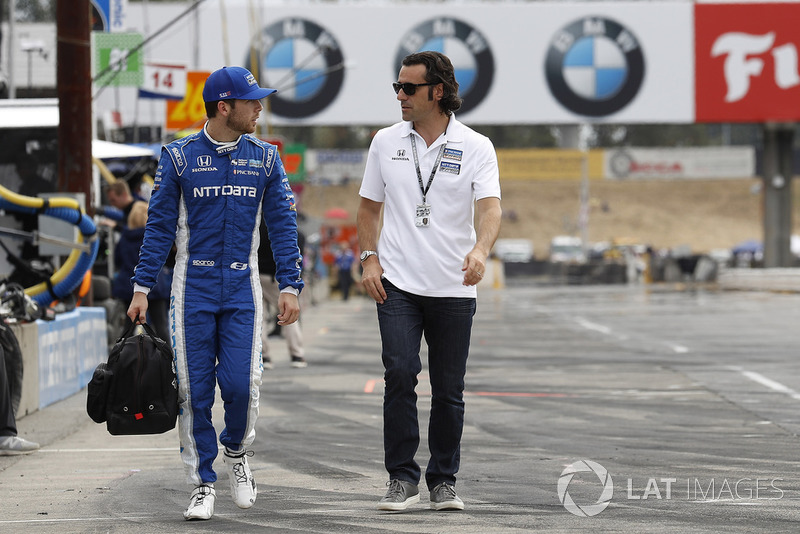 “To know what you need from the car to give your best, and to know if what you want from the car is even feasible… that’s a tough situation when you see the other guy knows exactly what he wants and is so bloody fast! You’ve got to be confident.

“I don’t think we’ve had the easiest cars to drive in that period since I retired, and Scott has been able to adapt to that better than his teammates.”

Asked if he thought that Jones shunting at Phoenix while running second had affected the driver’s confidence or harmed his relationship with the team, Franchitti replied: “Well, I think Phoenix was bad for him, but I think bouncing back with third in Long Beach helped get over that.

“I mean, yes, Ed made a couple of errors in the year – Indy was another one – and he had some weak spots that he was working through. But I also think he was very unlucky. I have never, in 20 years, seen a driver who was so unlucky with punctures. It was just incredible how often Ed had to pit with flat tires, so I’d say that often his race results didn’t reflect where he’d been running before unscheduled stops.

“But ultimately he just needed more time and he didn’t have that; Chip had made his decision. But I think Ed will continue to improve and he’ll get on well at Ed Carpenter’s team. It should be a good situation for him, although it’s a shame he won’t be racing on the ovals except Indy.”