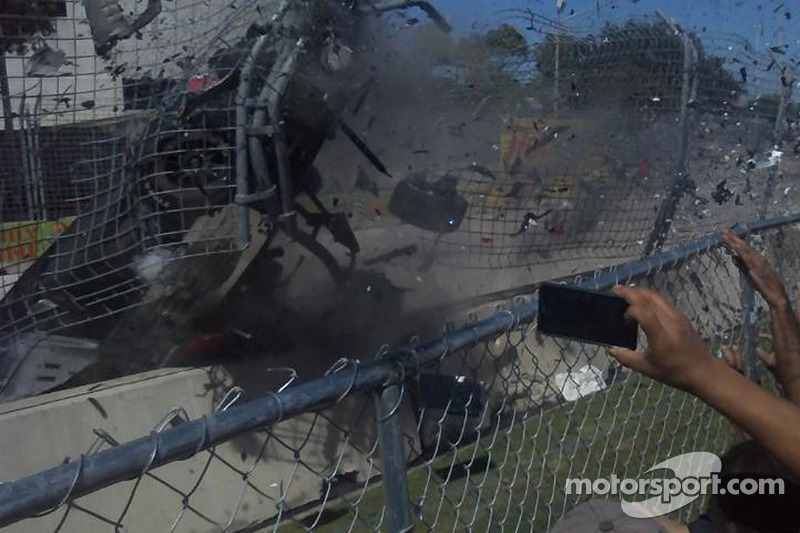 Dario Franchitti is awake and alert after his Ganassi IndyCar flew up in the air into the catch fencing.

Chip Ganassi gave the thumbs up and commented that his multi-time Indy 500 and IndyCar champion was “moving” and “talking to the INDYCAR safety and medical team” and that was excellent news for those who witness the horrendous crash.

On the final lap of today’s second race of the Houston Grand Prix double-header, Franchitti was arriving at the blind high-speed turn five when he collided with Takuma Sato. The Scotsman went airborne into the catch fencing before sliding down to the track after a series of filling over. It was a hard landing as the car bounced back onto the racing surface.

Also ended up involved was E.J. Viso who had contact with Sato after his initial contact with Franchitti. Yet the track was not completely blocked as the rest of the racers had to tip-toe around the three cars and the debris scattered about.

One could hear a pin drop as the spectators were stunned. So were the racers who drove by the scene, including Franchitti’s teammate Scott Dixon who was on his cool down lap after placing second in today’s race. He slowed to a near stop to see if his friend was moving.

The podium celebration was put on hold while the clean-up on the track and the medical team attended to Franchitti as everyone awaited news on the condition of Franchitti.

It hss been confirmed that 12 spectators and one INDYCAR official were injured from flying debris. Eleven were treated and sent home; two were sent to the hospital.

Video of the crash

Sato wins pole for Foyt in Houston; has trouble in race one

Franchitti injuries include a spinal fracture