Dario Franchitti is seeking to break a tie with Bourdais and Paul Tracy with his 32nd victory. His last win was the 2012 Indianapolis 500.

The four-time IZOD IndyCar Series champion, who won the race in 2009, posted a quick lap of 1 minute, 07.2379 seconds in the waning seconds of the 10-minute Firestone Fast Six on the 1.968-mile, 11-turn street circuit to earn his first pole start since Toronto last July. 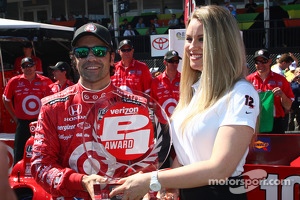 It was the 30th pole (tied with Sebastien Bourdais for seventh all time) of his Indy car career, which began in 1997. Franchitti is seeking to break a tie with Bourdais and Paul Tracy with his 32nd victory. His last win was the 2012 Indianapolis 500.

Five different teams were represented in the Firestone Fast Six and eight comprised Round 2 (12 cars), when Mike Conway set an IZOD IndyCar Series track record of 1:07.1937. Bourdais, competing in the 2006 Champ Car race, holds the record for the current configuration at 1:06.886.

Reigning IZOD IndyCar Series champion Ryan Hunter-Reay was .0555 of a second behind Franchitti in the No. 1 DHL car for Andretti Autosport and will start on the front row for the second consecutive race.

Will Power, last year's race winner, and Takuma Sato will share Row 2. It was the first time since 2008 that Power has not started on the front row at Long Beach. He went on to win that race.

The front-row starters are the same for the third race in a row in the young season, and each driver has a victory. Getting to the front was a victory of sorts for Hawksworth, the Firestone Indy Lights points leader who crashed in practice less than 24 hours earlier.

The Schmidt Peterson Motorsports crew worked for more than seven hours into the evening to convert a backup car, which is the same car that Esteban Guerrieri used to win last year's Long Beach 100, into the primary car. It, however, was in oval configuration in preparation for a test at Auto Club Speedway with driver Kyle O'Gara next week.

In order to be ready for practice and qualifying, the team - with assistance from the other two Schmidt Peterson Motorsports crews - put the road course package and Hawksworth's setup on the car, change the engine and customize the car to fit Hawksworth, who stayed with the team until the work was completed.