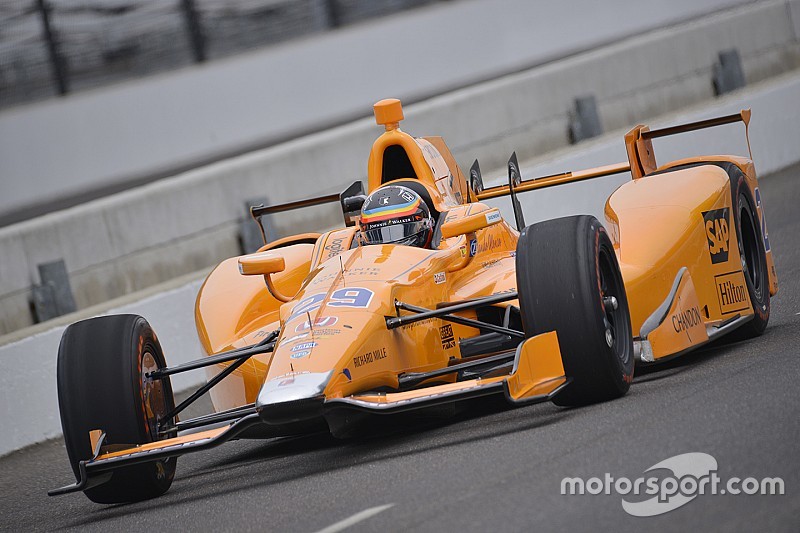 Alonso competed 110 laps on his first day in the car, which included passing the mandatory rookie orientation programme, setting a fastest lap speed of 222.548mph.

Franchitti, who won the Indy 500 three times, was impressed by how quickly Alonso adapted on his first run on an oval.

"I was amazed, I thought he got up to speed incredibly quickly," said Franchitti in an event at McLaren's headquarters ahead of its return to Indianapolis.

"I sat and watched the whole rookie test and I thought he got up to speed well, did a great job. To drive an oval is a very unusual thing for a road course driver who has grown up driving on road and street courses, and Indianapolis is probably even more so a law unto itself.

"The good news is, there's a lot of days of practice. If it rains, that could change things a little but, but ever lap Fernando's going to get is going to be helpful."

He suggests it will be a culture shock to Alonso to find how helpful his fellow Andretti drivers will be to him.

"A plus point is that he's got great teammates," said Franchitti. "They're going to help him, which I think he will find quite unusual.

"You all want to beat your teammates, but you all work together to beat the opposition because the cars are essentially the same and it's how your team figure out the small differences that can make the difference between success and failure."

Having gone there as a rookie last year and finished 14th, Chilton says the mental side will be key to doing this while maintaining pace.

"I'm a huge fan of Fernando Alonso and I have always said that he is the best driver out there," said Chilton. "So I have no doubt that he is going to do well.

"It's not really that aspect of going flat out and setting a laptime, it's the racing aspect. That's the difficult thing.

"When you've got no downforce on the car, basically doing 230mph through a corner it does take skill flat, but it's timing your decisions.

"Looking a Fernando's quotes when he got out the car, he said he never realised his right foot had a brain. That's exactly what I said.

"You get to the corner and your right foot has its own mind, it doesn't want to do what your mind is telling you to. So it's very mentally draining. As a rookie, that's the thing, the more mental aspect.

Mark Miles: Luring F1 drivers to Indy is “not a strategy”