Foyt elated by strongest race of the season at Gateway

Sebastien Bourdais and Dalton Kellett both survived contact to bring home their AJ Foyt Racing-Chevrolets in fifth and 12th respectively, delivering the squad’s best combined result of the year.

Bourdais told Motorsport.com this week that he felt the seven-time Indy car champion’s squad had made progress in 2021 that wasn’t obvious from the outside and that it was largely misfortune that had held them back.

Bourdais opened the season with a fifth place at Barber Motorsports Park, having stormed from midfield with a car damaged by debris, but since then had been unable to finish higher than 10th.

Last night at Gateway’s WorldWide Technology Raceway, he had contact with Tony Kanaan’s Chip Ganassi Racing-Honda and fell to the back, but an ambitious strategy worked in his favor and even saw him lead laps.

Meanwhile teammate Kellett had to be put on an alternate strategy, too, after being nudged onto the grass by Ed Carpenter at the end of a caution period on Lap 11, but he too shone, rising as high as eighth before eventually taking 12th.

“It feels great for the whole team,” said team president Larry Foyt. “We really needed this. Just been down on our luck for the past couple months but everybody just kept their heads down.

“Even though we didn’t qualify great here, the strategy finally worked in our favor and we were able to get a top five with Seb and Dalton had a great race and just missed the top 10 and finished 12th. For the team it was just a really solid night and it gives us some nice momentum going into the west coast swing.”

Having dropped behind Carpenter after the opening lap contact with Kanaan, Bourdais had to swerve around the crashing ECR car on Lap 58 that brought out the caution, but having already made his first of four stops on Lap 18, he remained on track and therefore took the lead as the leaders pitted.

A crash on the next restart prompted the Foyt team to pit Bourdais for the second time, and he then ran 15th-16th until his third (green-flag) stop on Lap 138.

As other pitted for their green-flag stops over the next 60 laps, the #14 ROKiT car moved up the order, as the team could leave Bourdais’ final stop until much later, having committed to the four stop strategy so early in the race.

He hit the front on Lap 199 and two laps later, Bourdais and fellow four-stoppers Takuma Sato (RLL) running second and Ryan Hunter-Reay (Andretti Autosport) in fifth caught the perfect break when Alexander Rossi hit the wall. This trio could therefore make their final stops under caution, losing far less time than if they had pitted under green, and therefore emerged fifth, sixth and seventh.

Despite Sato’s aggressive attempts to pass, Bourdais stood firm and retained his fifth place, crossing the line half a second ahead of the two-time Indy 500 winner.

“Pretty solid day for the ROKiT Chevrolet #14 here with AJ Foyt Racing,” said Bourdais. “Obviously WorldWide Technology Raceway has been not a very happy place for me – didn’t finish a lap in 2019 and ended up in the fence.

“But tonight we got out a top 5 after a very hard fought race. The guys did a really good job in the pits and we didn’t make any mistakes on track, so really happy about the outcome from 18th [on the grid]. That’s a solid day, and looking forward to the end of the season.”

Kellett, who ran eighth before his final stop was content to have risen a dozen spots from his 24th place on the grid – especially having survived an assault under yellow.

“Great race for the No 4 K-Line Insulators USA Team Chevy,” he said. “That was one of those days that keeps us coming back. We’ve had an up and down year, mostly on the downside but this is our best result of the season so far.

“It was a good race, the car’s balance felt really good. As the temperatures went down, it just felt more and more connected throughout the corner compared to earlier in the day when the temperatures were hotter. Long physical race, we had our work cut out for us, but we managed to execute on everything.” 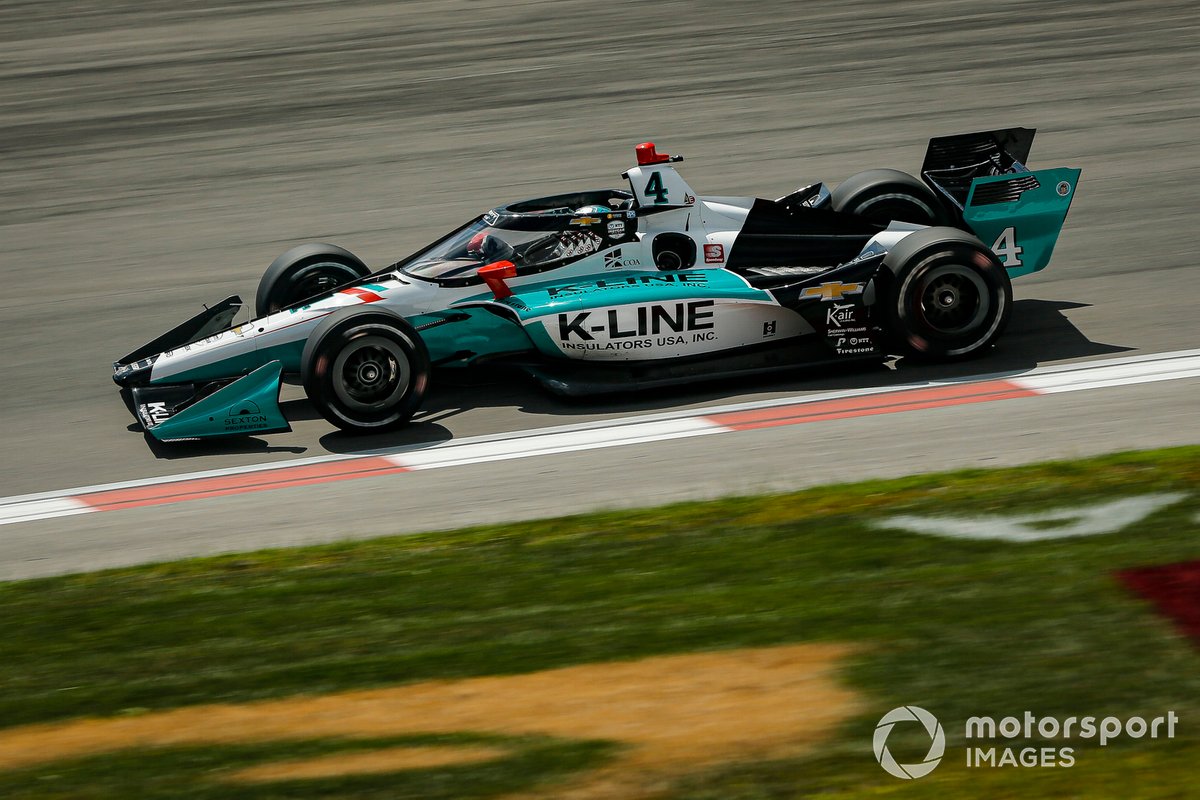 New points leader O’Ward “maximized what we could”

Newgarden: IndyCar driver aggression over the edge at times