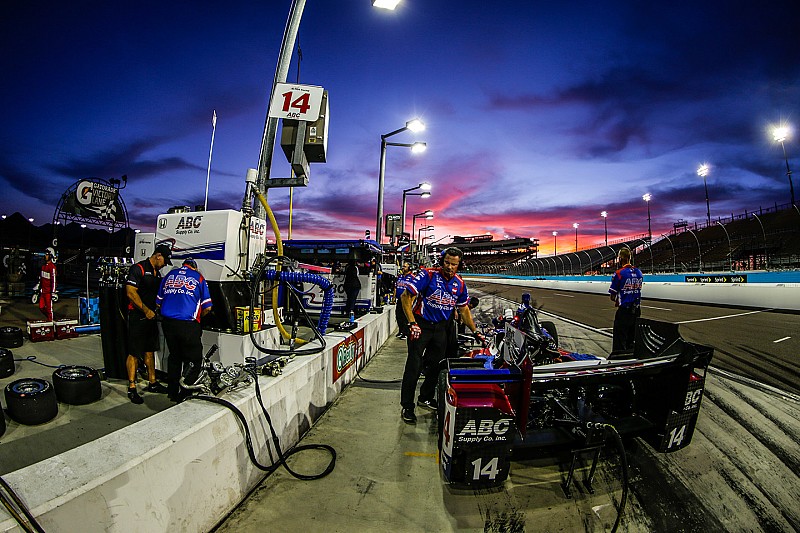 Takuma Sato and Jack Hawksworth say G forces, car balance and aero wash will make Phoenix International Raceway one of the most intense races of the season.

Both A.J. Foyt Racing-Honda drivers, who shone in terms of pace at the season-opener in St. Petersburg, are predicting the 1.022-mile course will be difficult to pass on, but because the track is so short, it will be crucial to have the cars set up for handling traffic.

“[At the pre-season test] I found it quite tricky to follow the cars and there are not many lines available,” said Sato, who has one IndyCar win to his credit at Long Beach, but has frequently shone on ovals. “It’s pretty much a single racing line, so I think it will be very difficult to go two-wide and overtaking will be tough.

“Also, you lose significant downforce when following a car but you cannot really choose different lines for finding clean air, so it’s crucial to have a good mechanical grip and be strong in traffic.”

Hawksworth echoed Sato’s sentiments, saying the key to being strong at Phoenix was “a good balance at both ends of the circuit and a predictable car in traffic. The lap is so short that there will be very little single car running during the race. Being quick in traffic will be critical.”

The Briton, now in his third season of IndyCar and his second at Foyt, added: “It kind of reminds me of a mini Pocono with the banked Turn 1 and the long-duration flat Turn 3.

“It is good fun to drive but how it will race in terms of overtaking and passing opportunities is a question mark. Hopefully we put on a good show. Turn 1 is the trickiest corner and also presents the best passing opportunity during the race. Look for most of the action to happen down at this end of the circuit.”

Both drivers commented that the mental focus required while averaging 190mph around PIR was immense.

Said Sato: “The track has such a high level of grip and the cornering speed is incredibly fast, so the sensation of turning into Turn 1 is quite amazing. It’s definitely one of the most physically demanding tracks as we pulled close to 5Gs and it was pretty tough over the long runs in testing.

“Because of that, it’s mentally demanding too. Also the line is very limited so you need to be focused a lot. It’s less than 20sec a lap, so there is no relax time at all for the whole race!”

Added Hawksworth: “Like most ovals, it is more mentally demanding than anything else. G-loads are quite high but the drivers can rest their heads on the pads inside the cockpit so physically this isn't an issue.

“Mental concentration will be critical though and staying alert and on top of the car for 250 laps with 22 cars out there will make a big difference.”

A.J. Foyt will participate in the unveiling of the A.J. Foyt Champions Trophy on March 30 at the Heard Museum in Phoenix. The trophy will be presented to IndyCar's Phoenix International Raceway winner each year.

Seven time Indy car champion and four-time Indy 500 winner Foyt also won four races at PIR. These included the inaugural event in 1964, leading the 100-mile race from start to finish. He followed this up with victories in ’65 (won from pole), ’71 and ’75.

Foyt also won a race in 1960 at the Arizona State Fairgrounds, a one-mile dirt track in Phoenix.

Scott Sharp in 1996 and Eliseo Salazar in 2001 have produced A.J. Foyt Racing’s best finishes at PIR.

Why sparks may fly over IndyCar's domed skids