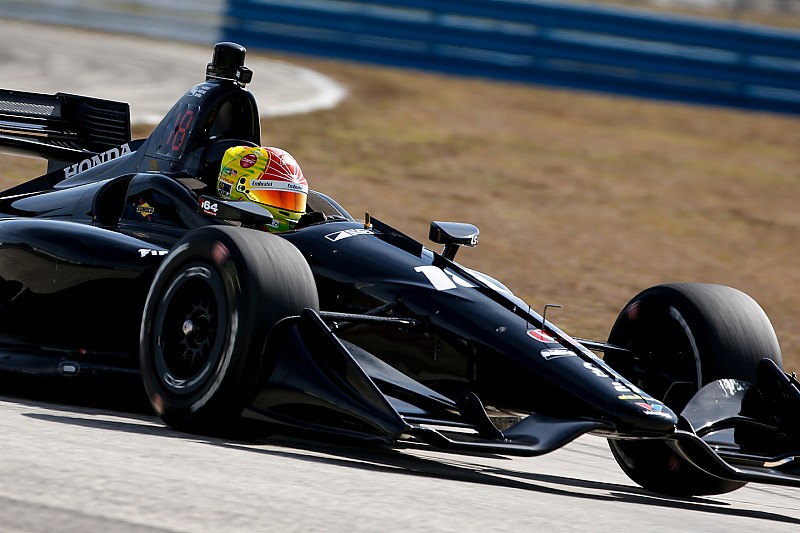 Race engineer for the #19 Dale Coyne Racing entry, Michael Cannon, says Pietro Fittipaldi is adapting to the demands of IndyCar “like a true professional,” mid-way through just his second day of testing.

Fittipaldi and fulltime Coyne driver, Sebastien Bourdais, are among the 12 drivers testing at Sonoma Raceway today, ahead of Spring Training at Phoenix’s ISM Raceway later in the week.

Coyne is expected to announce before or at Phoenix this week that the #19 car will be shared by reigning World Series Formula 3.5 V8 champion Fittipaldi and Indy Lights graduate Zachary Claman de Melo.

Although Cannon is impressed with both his probable drivers, he gives extra kudos to Fittipaldi for tuning himself into IndyCar, after just a day-and-a-half of testing.

“He’s fantastic, a really pleasant surprise at Sebring,” Cannon told Motorsport.com. “We only knew what he’d done, not how he’d be. But within two sessions there, he was pretty much up to speed.

“This place [Sonoma] is more of a challenge, but he’s acquitting himself pretty well already on his second set of tires.

Comparing Fittipaldi to Claman de Melo, Cannon said: “They’re chalk and cheese in a lot of ways. Zachary is a very natural talent, but very much learning his craft, coming up from Lights. But he did an excellent job at Sebring too, didn’t put a wheel wrong.

“So yeah, they have two different approaches but Zachary will gradually move in the same direction as Pietro as the season goes on.”

Regarding the potential disruption of running different drivers, Cannon shrugged it off, saying: “I’m fine if it’s going to be these two drivers. I’m really impressed with both of them.

Although many drivers and team managers have hinted that this is the best year for rookies to join, when everyone is having to learn the revised behavior of the cars equipped with Dallara’s universal aerokit, Cannon says rookies are going to suffer more.

“It’s going to be really tooth-and-nail for the rookies, I really don’t envy them,” he said. “There are so many experienced pros out there and their knowledge base of how an IndyCar and the Firestone tires behave is just enormous.

“That’s hard to compete with for a rookie, who’s still going to need to read the track, read the tires, read the handling and know when something’s out to lunch. There are guys who are perfect out there – someone like Scott Dixon – and it takes a while to get to that level, whoever you are, when you don’t have a touchtone, a baseline to work from.”

Cannon acknowledged that the fewer permutations of aero configurations would help rookies – and race engineers.

“It’s a lot nicer to run this car!” he said. “We’re spending a lot less time scratching our heads and poring over the aero calculator. Much more about driver feel and feedback and finding mechanical grip.”

Kanaan: “This is how we wanted IndyCar to be – now we must find grip!”