Injured Fittipaldi “living the race” with Coyne's team at Indy 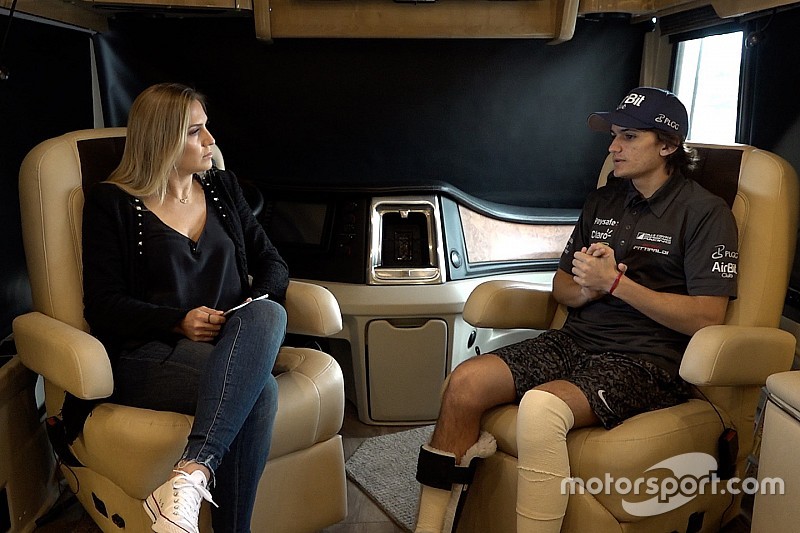 Despite being forced to miss the Indy 500 through injury, Pietro Fittipaldi says he’s been listening to Dale Coyne Racing’s team radio exchanges and trying to gain as much knowledge as possible of the race.

In an extensive interview on Motorsport Report, Fittipaldi says that tuning into the team radio and conversations with Coyne’s full-timer Sebastien Bourdais have helped him prepare for being a rookie in the Indy 500.

Fittipaldi broke both legs in an LMP1 crash at Spa-Francorchamps earlier this month, and was forced to miss the 500, one of the seven races he had scheduled to campaign the #19 DCR-Honda.

“Sebastien has been a real good friend of mine,” he said, “and he has been here several times to see how I’m doing but also to let me know how things are going out there on track.

“What I’ve been trying to do is live the weekend without actually racing it,” he said. “So when I come back next year or the year after, I’ve already been through an Indy 500 weekend, all the procedures that go with it, practice days leading up to qualifying and then after qualifying in the race.

“I have the team radio there and I listen to all the chatter from my team.”

Regarding his replacement for Indy, the team’s other part-timer in the #19, Zachary Claman De Melo, Fittipaldi remarked: “He’s a rookie as well [but] the team is doing a great job of getting him up to speed.

"He has a great teammate in Sebastien who has a lot of experience, and I wish him all the best, and the whole team as well.”

Fittipaldi has just one IndyCar start under his belt so far, qualifying a remarkable 10th at Phoenix – his first oval race – although eventually sliding into the wall during the race.

However, the 21-year-old, reigning champion in the now defunct Formula V8 3.5 series, chose to embark on his recovery in Indianapolis, under the guidance of legendary doctor, Terry Trammell.

Fittipaldi explained: “I had surgery [in Belgium] on the day of the accident and a week later I flew to Indianapolis to be with all the IndyCar doctors, and they set up a really good program for me.

"Five to six times a week I’m training at PitFit, which is a training facility where a lot of drivers go, to train my upper body so when I get back in the car I’m not completely unfit and it won’t be too difficult.

"And I’m [living] at the motorhome at the track, which first is great because I can follow what’s going on with the team… But also the Medical Center is right behind my motorhome, and I can go five to six times a week training [at PitFit] and five or six times a week to do physical therapy. Every day, from 9 to 5, just working on my body, trying to get back.

“The REV group have been really helpful to me, lending me this motorhome and I’m going to stay here until June 20th, then I go back to North Carolina. As soon as I can walk on one leg, and do things on my own, I’ll go back home.”

Fittipaldi also admitted there had been dialogue between himself and the Haas F1 team, based in Kannapolis, NC, although he remains focused on getting back with Dale Coyne Racing in IndyCar.

“I had a meeting with Guenther [Steiner, Haas F1’s team principal] a couple of months ago, and we were talking before the accident.

“He sent me a couple of messages after the accident. He was very supportive. So we’re still just talking.

“The main focus for me getting better, to get back in the car as soon as possible, and then after that anything can happen. We’re definitely still talking but for now I’m just focused on getting back in a car for the last five [IndyCar] races [Mid-Ohio, Pocono, Gateway, Portland and Sonoma].”