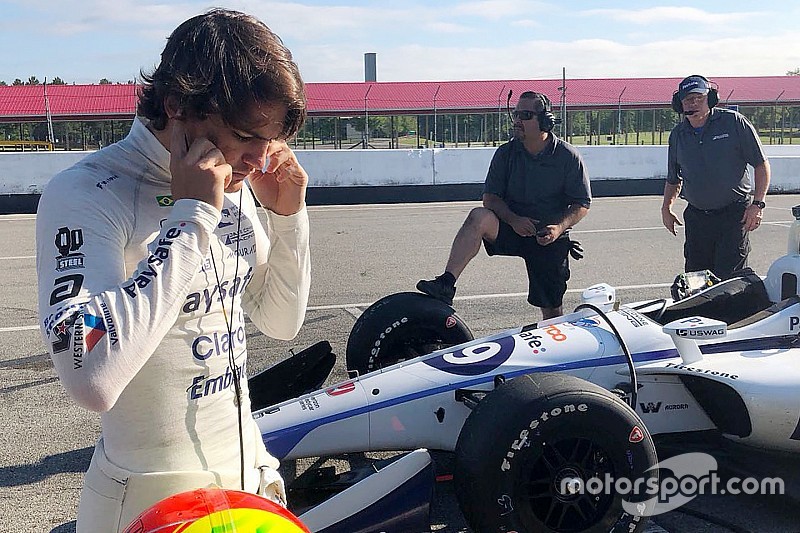 Dale Coyne Racing's Pietro Fittipaldi returned to the cockpit of an IndyCar at Mid-Ohio on Tuesday and says he’s aiming to qualify in the top 10 on his return to competition next week.

Fittipaldi suffered a complex fracture of his lower left leg and a broken right ankle after a power steering problem led to a crash at Eau Rouge in the FIA World Endurance Championship's season opener at Spa earlier this year.

He spent almost two months in Indianapolis on a recovery programme led by IndyCar doctor Terry Trammell and Fittipaldi targeted a comeback at next weekend's Mid-Ohio race, which he will now achieve.

"It was amazing, man, I'm so happy to be back," Fittipaldi told Motorsport.com. "The past two months after my accident, I've been working really hard with the great people around me working on getting back to driving.

"I was able to accomplish that yesterday, I feel the test went very well. I felt very comfortable in the car. It's been an intense couple of weeks but I think that's why I was back in the car so soon."

Fittipaldi was able to complete a full test program, having used the morning's running to assess his fitness levels.

"It was a full test, we did around 100 laps, which was a lot," he said. "But that was our plan, to get as many laps as I could and wear me out a little bit because we're racing next weekend.

"We used the morning to get comfortable and see what we had to do with the pedal [adjustments] and everything felt fine right off the bat. As soon as I was comfortable we worked on the test plan. They wanted to try a bunch of things on set-up and it was like a regular test day. I'm happy it went well and I'm excited for the weekend."

The DCR driver says he will be aiming for a top 10 grid slot at Mid-Ohio next weekend.

"Of course, my expectation like all drivers is to win," he said. "I know I'm a rookie and new to a lot of tracks. [But] I'm going to do my best to deliver the result at the weekend. We need to see where we are after a decent test, but I think we'll be competitive and the goal will be to qualify in the top 10 and see how we get on in the race.

"I've loved working with the team since the first race at Phoenix and we want to deliver in the last five races."

Carlin: McLaren “too late” to enter IndyCar in 2019