Eight IndyCar drivers head down under for V8Supercars Surfers race 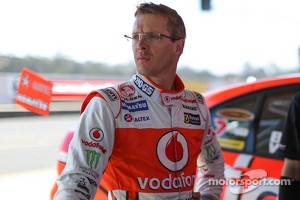 Bourdais joins eight other IZOD IndyCar Series regulars in the Gold Coast 600 on Oct. 19-21 on the street circuit. Last October, he teamed with Jamie Whincup to win the Saturday race and finish second the next day to earn the Dan Wheldon Memorial Trophy presented to the best-performing international racer.

Bourdais will reunite with Whincup to co-drive the TeamVodafone entry in both 190-mile races. Whincup, who won earlier in the month at Bathurst in the Holden VE Commodore, has a sizable championship lead over teammate Craig Lowndes entering the 12th of 15 events.

"Jamie's in a great position to win the championship again, so that's pretty cool to be able to help him," said Bourdais, the first driver to win in an Indy car (2005, '07) and V8 Supercars race on the Gold Coast. "It would be great to go there and get a couple of wins, and enjoy the time in Australia after a pretty intense (IZOD IndyCar Series) season."

IZOD IndyCar Series championship runner-up Will Power will partner with Mark Winterbottom in the 28-car field, while Team Penske teammate Ryan Briscoe will co-drive with Garth Tander. Power, a native of Australia who did not compete last year because of fractured vertebrae suffered in a race crash at Las Vegas, is looking forward to the engagement.

"It's now the only chance I get to race in front of a local crowd," said Power, who earned the pole for the October 2008 IZOD IndyCar Series exhibition race on the circuit won by Briscoe. "Last year's events aside, I have enjoyed racing at Surfers Paradise for many years and it will be great to team up with Frosty, who won there last year in the car I would've been in (with Richard Lyons)."

Simon Pagenaud will share the seat with Lee Holdsworth, with whom he clinched third place in last year's second race. Justin Wilson will be teaming up with Greg Murphy, while compatriot Mike Conway will be driving with Taz Douglas.

"I'm really looking forward to driving alongside Greg," said Wilson, who will be making his first appearance in the event. "I know he's fast and has a never give up attitude. It will be a tough challenge driving a V8 for the first time and I know the level of talent already racing in the series is extremely high, so my goals are to listen to Greg and the team and help them get the best finish possible."

Graham Rahal will share the car with Rick Kelly, while Marco Andretti will co-drive with Tim Blanchard and Andretti Autosport teammate James Hinchcliffe is paired with Michael Caruso.

"With the V8 Supercar you probably have just as much horsepower as an IndyCar but a lot more weight, and the tires are a lot skinnier with a lot less grip," Hinchcliffe said. "It's also a pretty gnarly track."