Eight Goliaths; One David – Guess who’s on the Indy 500 pole? 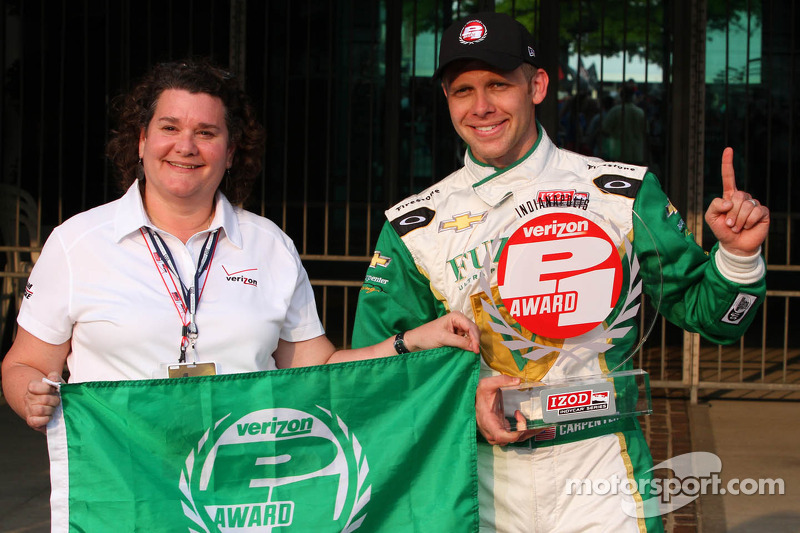 The morning rain in Indianapolis did not damper the enthusiasm of the drivers or there fans for the Indy 500 Pole Day activities. The final top nine shootout ended with the Indiana driver who is also the team owner!

For a while it looked like the elements were going to win pole position for the 97th Indianapolis 500. It rained at the end of the 2-hour practice in the morning and didn’t stop until about 11:30, half an hour past when qualifying was supposed to start at Indianapolis Motor Speedway.

But qualifying did go on, albeit a bit late and by mid-afternoon, it appeared Team Penske was about to lock out the front row – or at least a potential front row – in the traditional four-lap time trial process. Will Power led teammates Helio Castroneves and AJ Allmendinger in the lineup before the big dogs from Andretti Autosport took to the 2.5-mile oval. Champion Ryan Hunter-Reay tried, but was only good enough for second, rookie Carlos Munoz settled for third and Marco Andretti had the sixth best speed. Not exactly what they wanted for their first qualifying attempts.

Bumping began as soon as there were 24 cars qualified and first Buddy Lazier, Pippa Mann and then Ana Beatriz were forced out of the first-day field, then rookie Tristan Vautier and Sebastian Saavedra, placing last year’s polesitter Ryan Briscoe on the bubble as final first-round Oriol Servia qualifier went to bat and bumped him out from the first session!

It wasn’t a great afternoon for Honda at first glance, locked out of the Fine Nine after a single round. The top cars belonged to Power, RHR, Munoz, Castroneves, Ed Carpenter, Andretti, Allmendinger, EJ Viso and James Hinchcliffe – three Penske entries and five Andretti Autosport drivers with only Carpenter as the single-car interloper.

It’s not been a great day for Rahal Letterman Lanigan Racing either; James Jakes failed post-qualifying inspection, Michel Jourdain Jr wasn’t quick enough to make the top 24 and Graham Rahal was on the bubble as the first round came to a close and 32 drivers had taken the full, four-lap sequence of time trials. AJ Foyt Racing’s rookie, Conor Daly completed only 1-1/2 laps before we saw smoke coming from the rear of his car.

At 6PM the first eight rows were filled, and there was a half-hour break before the fastest nine cars took to the track to determine their spots in the starting order. Behind them the field looks like this: JR Hildebrand, Alex Tagliani (first Honda), Tony Kanaan on row 4, Servia, Justin Wilson and Sebastien Bourdais on the fifth row, the Ganassi cars of Scott Dixon, Dario Franchitti and AJ Foyt’s Takumo Sato occupying row 6, Charlie Kimball, Jakes (took him three tries!) and Simon Pagenaud (celebrating his 29th birthday) on row 7 and Townsend Bell, who withdrew his early time and requalified on the inside of row 8, Briscoe (who needed three tries) and Simona de Silvestro.

At 6:30 the battle of the eight Goliaths and one David began with a single opportunity to take pole. James Hinchcliffe was first up (as the slowest of the nine). The two-race winner this year clocked in at 227.090 mph for his four-lap average. Next up was EJ Viso, who upped the ante to 228.150, making way for rookie AJ Allmendinger, whose four-lap average, thanks to a fall-off on his fourth lap was 228.099.

Marco Andretti pulled on-track at 6:49 and, helped by his first lap over 229-mph put together a four-tour of 228.261 mph. He was followed by Ed Carpenter, who owns his team as well as driving for it. The winner of INDYCAR’s most recent oval race at Fontana, CA clocked 228.762 to wrest the top spot for the moment. Would he keep it with four more drivers to go?

Vying for his record-tying fourth Indy 500 win, Helio Castroneves stepped up next, the second of three Penske drivers in this battle. The Brazilian looked good on his first lap but faded to an average of 227.762, leaving Carpenter atop the standings – but with three drivers left to go. Rookie Carlos Munoz took to the classic Brickyard oval with a stout first lap at nearly 229, but he too faded to 228.342, second with two to go.

Reigning champ Ryan Hunter-Reay came up next and, while he had a good first lap, by the time he hit his third and then his fourth, well, it wasn’t meant to be at 227.904 mph. Final driver up was Will Power, who’s had a miserable season (for him anyway) thus far. The INDYCAR bridesmaid waited a bit before he took off for his four-lap tour of the iconic Indy oval, then put up a hot first lap that had Carpenter worried. But Power couldn’t do it and faded to sixth at 228.087mph.

That left the one David ahead of nine Goliaths, as Carpenter won the pole for the 97th Indianapolis 500, leaving Munoz, Andretti, Viso, Allmendinger, Power, Hunter-Reay, Castroneves and Hinchcliffe wondering what they could have done to knock him off.

While Carpenter has family connections with the Speedway, his mother Laura married to Tony George, Ed came up through the sprint car ranks and earned his way to this big league. This Indianapolis pole position is a popular one for Indianapolis residents – it’s one of their own starting at the front of the biggest race in the world.

Carpenter came into the media center with his three children in tow – his step-sister Lauren George graduates from Notre Dame tomorrow so his parents were in South Bend. Beaming, he admitted that the team “hardly changed the car at all from the first segment to the ‘Chevy Shootout’,” as he renamed it. “I was hoping someone else would overstep it,” and his eight competitors sure did. While he admitted it was an honor to win the pole and grab the publicity for the next week, Carpenter’s focus is, as it should be, on the 500-mile battle ahead. “This team made the right calls and to take a shot at it was better than not, but I like to race better than qualify.”

If that’s the case, 32 other drivers better do their homework before next Sunday.