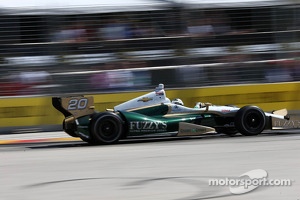 Carpenter, currently the only team owner/driver in the open-wheel campaign, defeated Franchitti by inches at Kentucky Speedway in 2011 and then by a few feet in the MAVTV 500 World Championships at the Auto Club Speedway last year.

Unfortunately, Franchitti will not compete this Saturday in the MAVTV 500 season finale due to recent injuries in a crash in Houston, but Carpenter expects to be one of the favorites when the green flag drops Saturday at 5:50 p.m. PDT at the fast, high-banked two-mile oval east of Los Angeles.

Carpenter, the 2013 Indy 500 pole winner, returns to the site of his most satisfying victory as a first-year team owner with his Ed Carpenter Racing/Fuzzy’s Vodka operation. The Butler University marketing graduate led 62 laps in last year’s 250-lap feature at Fontana and swept past Franchitti on the last circuit to claim the top prize.

“My first win at Kentucky was the most exciting because I finally won an IndyCar Series race,” said Carpenter. “But last year’s Fontana win was the most gratifying since it was my team and we were in our first year of operation. It meant a lot to go up against the big teams like Ganassi, Penske and Andretti and win the race with our new one-car team.”

Carpenter’s squad pulled off another big upset this year at Indy when he drove his No. 20 Fuzzy’s Ultra Premium Vodka Chevrolet to the pole position at Indianapolis against the five-car team of Andretti Autosport and the three-car effort of Penske Racing in a special qualifying shootout.

“Winning the pole at Indy was a huge accomplishment for our team,” he explained. “We were the little guys going against the big ‘Goliath’ teams and we prevailed. Now, we come to Fontana and the big teams are racing for a series championship. But I think they know that our one-car effort will be a contender too. We’ve been there before and we believe we are ready for the challenge.”

Carpenter’s organization suffered a minor setup following the recent IndyCar Series test at the Auto Club Speedway late last month when the team’s trailer caught fire on I-40 in Arizona. The fire basically totaled the trailer and some of the contents were burned or damaged by smoke including the Chevy-powered Dallara DW12 race car.

“We had a massive clean-up job to do in just a few days after the fire,” Carpenter said. “But our team really dug in and spent extra hours washing and cleaning everything we had in the trailer. Sure, we lost a few items in the fire but we were able to save a lot of things. The IndyCar community really helped us too.”

The Fuzzy’s Vodka Chevy race car that was tested at Fontana last month had to be completely rebuilt including a fresh paint job and new parts. But the popular green, gold and white livery is back and Carpenter is set to defend his race-winning title.

“It’s always fun to come back to tracks where you’ve had success,” said Carpenter. “Last year we were successful at the Fontana Open Test and that carried through the race. We were pleased with our recent test last month. So let’s hope that carries over again in Saturday’s 500-miler. Fontana is always fun because it’s really challenging. The weather changes a lot and the track changed too. One of the things we have been working on this year is to be able to use more of the track.”

Last year’s race saw Carpenter utilize the high groove of the banking at the Auto Club Speedway late in the contest to pass Franchitti for the lead. Will Ed use that strategy again this Saturday night?

“That’s the beauty of the Fontana racetrack; there are a lot of options,” he said. “It’s up to us and the other teams to figure out how to make the car work for the best shot at winning the race. It’s a long race with 250 laps and your team must be good in pit stops, making the proper adjustments as the race develops and being able read the track surface as the sun goes down and the lights go on.”

Carpenter’s little one-car operation was the best last year at making all of the right moves at the right time. Now, Ed and his Fuzzy’s crew think they can do it again.

“I think we have everything in place to make another strong showing for the win at Fontana,” he said. “I know I want to be back in that ‘Fuzzy’s 19th Hole Victory Lane’ again this year.”

IndyCar Series action begins at the Auto Club Speedway this Friday at 10:45 a.m. PDT with the first round of practice. Saturday’s MAVTV 500 is set to start at 5:50 p.m. PDT and will be televised live on NBC Sports Network.