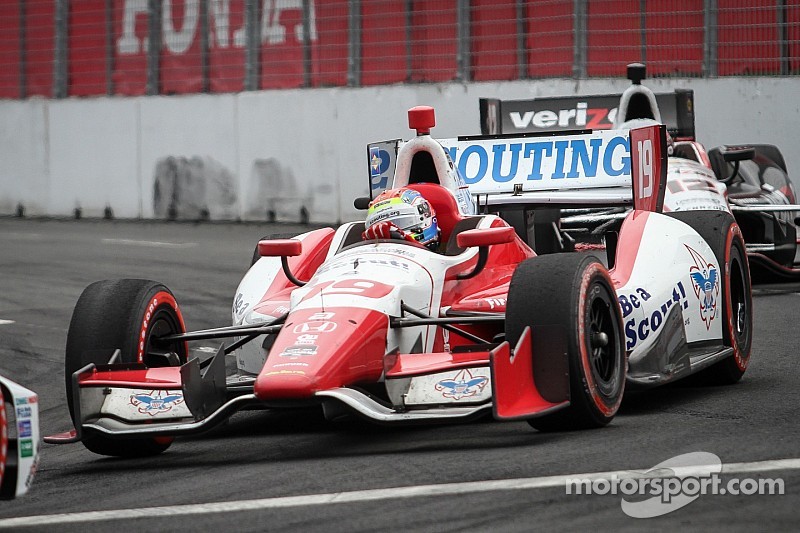 TORONTO (20 July 2014) – Justin Wilson had a big day of racing on Sunday as he contested two Verizon IndyCar Series races in one day through the streets of Toronto. He came away with two hard-fought top-10 results after a day that saw a mix of dry and wet weather race conditions.

The Honda Indy of Toronto double header event was originally scheduled to run Race 1 on Saturday, but when rain postponed the event until Sunday, the Verizon IndyCar Series was prompted to run two shortened 65-lap (80 minute) races on Sunday.

Race 1 took place in the morning under dry weather conditions. Wilson started from seventh on the grid and the veteran racer narrowly avoided two cars that made contact just ahead of him on Lap 1. The incident created a pile up behind Wilson’s Dale Coyne Racing machine and IndyCar red flagged the event in order to clear the track.

It was an eventful second race for sure

When the race went back to green, Wilson restarted sixth in line. He would run among the top-seven until his Dale Coyne Racing engineer Mike Cannon called him to pit road for his one and only pit stop on Lap 33 which saw the crew replace the Firestone Black tires with the Firestone Reds.

Wilson emerged ninth in the order and remained in that position through a long green flag run. He defended against Will Power in the closing laps of the race but ultimately ceded the position on the final lap and was credited with 10th at the checkered flag.

Wilson and his Dale Coyne Racing team had little time between races with Race 2 set for a 4:15 PM race start. And with rain looming, IndyCar officials moved the green flag up about 10 minutes early.

The Race 2 grid was set by championship points which meant Wilson would start from 15th for the standing start event. Unfortunately, the No. 19 Boy Scouts of America Honda stalled at the green, but Wilson was able to get the car restarted and back underway.

Simultaneously, a full course caution was displayed for a Lap 1 incident. Dale Coyne Racing took advantage to bring Wilson to pit lane to top off on fuel and switch from the Firestone Red tires to the Firestone Blacks.

Upon the restart, Wilson was in the 21st position but methodically worked his way forward and was up to 13th in the order when rain began to fall. The race went under full course caution for a multi-car incident and Wilson took to pit road for rain tires and fuel. He restarted 14th and made his way up to ninth in the tricky wet track conditions within a matter of laps.

Wilson had moved up into sixth when the fourth full course yellow of the race was displayed. He ran among the top-eight when another green flag stint followed, but when the fifth yellow of the race was thrown shortly after, the typical canny Dale Coyne Racing strategy came into play. The call saw the No. 19 Boy Scouts of America machine stay out on rain tires while nearly the entire field hit pit road for slicks.

There were less than nine minutes to go when Wilson led the field back to green. The track quickly developed a dry line and Wilson found himself fighting hard with wet tires on a drying track. Mike Conway got by Wilson for first which was quickly followed by yet another full course caution with less than six minutes remaining.

Wilson looked poised for a podium result as he ran second in the order, but the race was red flagged which set up a three minute dash to the finish. When the race went back to green, Wilson’s No. 19 Honda was at a disadvantage on the rain tires with a pack of hard charging competitors just behind him on the dry tires.

Wilson fought hard in the closing laps and ultimately hung on to bring the No. 19 Boy Scouts of America Honda home in 10th.

"It was an eventful second race for sure,” said Wilson. “We just kept battling along and we opted to try to stay out and gamble and it didn't really pay off. It was probably the right thing to do but it is just tough, you know, you are leading with five minutes to go and that red flag pushed things back. I guess that is just the way things go sometimes. We were really hoping for another on track incident and to go under yellow to the end which would have really helped us out. You have three laps there at the end on a dry track with wet tires and I tried to get as good of a restart as possible to make the most of it but during the last lap and a half, guys were just driving by me. I was really hanging on there at the end.  At the end of the day we earned two top-10 finishes. We will keep trying to progress and keep improving."

The Verizon IndyCar Series will next travel to Mid-Ohio Sports Car Course in two weeks. Wilson finished eighth at the track in last year’s event.