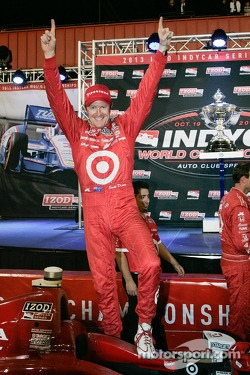 Dixon qualified the No. 9 Target Honda seventh, but started in 17th as a result of a 10-spot grid penalty assessed for an engine change. At the start of the 250-lap event, Dixon quickly advanced his position, reaching 13th by lap five. The No. 9 team pit for the first green-flag stop of the day on lap 39, cycling out in the 12th spot. Dixon maintained his position until the first caution on lap 71, allowing the team to pit from the 12th position. With a strong stop, Dixon gained six positions off pit road. On the ensuing restart during lap 82, Dixon restarted sixth and slipped into the 10th spot while battling three-wide for position. The second caution came on lap 101 and the team completed its second pit stop, cycling back out in eighth. On lap 109, the field went back to green for one lap before the race was again under caution. The subsequent restart occurred on lap 127, helping Dixon advance and regain sixth before driving the No. 9 car to second by lap 148. While in second, Dixon again entered the pits for a green-flag stop on lap 190, as the race’s fourth caution occurred. The caution timing enabled Dixon to cycle out in the lead. During the restart on lap 198, Dixon led the field to green and battled for first before the fifth caution occurred on lap 210. On lap 230, the No. 9 team stopped for an unscheduled pit stop for overheating issues as the race again went under caution, helping Dixon remain on the lead lap. A couple of late-race cautions helped the team control the overheating issue and allowed Dixon to secure a fifth-place finish and win his third IZOD IndyCar Series championship.

Tagliani qualified the No. 10 Target Honda 13th, but was assessed a 10-spot grid penalty for an engine change and began the race from the 21st starting position. This was a minor setback for Tagliani, as he powered his way into 16th by lap five. On lap 39, the No. 10 team entered pit road for its first green-flag pit stop of the day. Tagliani maintained his position in 16th until the competition’s first caution on lap 71. He then came in for his second pit stop on lap 72 and gained two positions on pit road, enabling him to restart in 14th on lap 82. He continued to consistently hold position in the top-10 before the competition’s second caution occurred on lap 101. On the ensuing restart on lap 109, Tagliani moved his way through the pack and settled into third on lap 110 before taking the lead on lap 128. He continued to battle in the top-five, when the competition’s fourth caution occurred on lap 190. The No. 10 team ended their day on lap 210, as Tagliani spun and made contact with the wall, bringing out the fifth caution of the day, which led to a 14th-place finish.

- -This championship comes in Dixon’s 12th year with TCGR.

- -This championship is the 17th overall for Chip Ganassi Racing Teams (Indy car-10 and GRAND-AM–seven).

Chip Ganassi: “We were down and we were behind. I’ve got to hand it to Honda. They stepped up. When it was time to make a move, they made the move and helped us win the driver’s championship. No question. We couldn’t have done that win without them. It’s that simple.”

Scott Dixon: “It was a crazy day. We started back. The car we had to work on a fair bit through the race. It was just a huge credit to Team Target. They played everything straight tonight. We had to work on a bit of strategy, we had to work on the car a lot, and then we had an issue with some overheating problems towards the end. I still can’t believe we’ve won the championship. It’s fantastic. So many people to thank and it’s just unbelievable.”

The many songs of the MAVTV 500