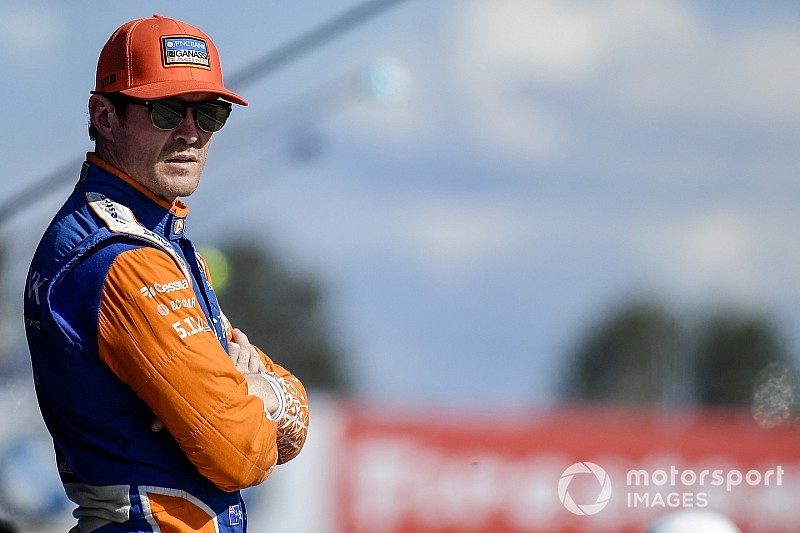 Scott Dixon admits that he thought his race was over after getting embroiled in the first lap crash in the Grand Prix of Portland from which he recovered to finish fifth despite also receiving a drive-through penalty.

The four-time champion was left blinded by dust and stationary off-track at Turn 3 in the Lap 1 clash between Zach Veach and James Hinchcliffe that spun the latter’s Schmidt Peterson Motorsports-Honda, and led to Dixon, Sebastien Bourdais, Graham Rahal and Ed Jones colliding, while Marco Andretti was launched over Hinchcliffe’s car and landed upside down.

Said Dixon: “I felt like I wanted to cry for a little bit, actually. Then once I knew the dirt cleared, I had all four wheels, still the engine was running, I'm like, ‘Oh, maybe it's not so bad.’

“I knew starting where we were starting [11th] it was going to be tough. We had a pretty clean start to get through [Turns] 1 and 2. Obviously 3 looked pretty tight through there. I was racing pretty hard with the car beside me. The #5 [Hinchcliffe] and Veach kind of got into each other there.

“I had nowhere to go. It was just one of those things. Tried to slowed down, went sideways, hit from behind, off in the dirt. Hit pretty hard actually. Luckily I pulled the clutch once the dust cleared. I didn't think there was going to be a left front wheel on it. I looked, the wheel is there. Put it in emergency mode, started to get reverse.

“There was enough room behind me, I backed up, got the guy to move his [Safety Team] truck out of the way. I couldn't believe the thing was still driving. I knew it was going to be a pretty lucky day from that point on.

“Then we basically just stuck to a two-stop strategy. That played out for us with how the cautions fell. Unfortunately we then had a speeding drive-through penalty on pit road which we'll have to look at that. Definitely didn't unlatch early. The wheel overcorrected, got pinged for 50.2. That was definitely frustrating.

“I thought at that point we were definitely going to be out because I thought we were going to get lapped. Luckily the pit sequence had already started for the leaders at that point, too, so it enabled us to stay on the lead lap. We got lucky with the caution. Crazy, crazy day.”

Soon after the final restart, Dixon was passed by Spencer Pigot’s Ed Carpenter Racing-Chevrolet but remained fifth, three places ahead of primary title rival Alexander Rossi, thereby extending his points lead to 29 going into the double-points finale at Sonoma Raceway.

“Had a good race there, with Pigot,” said Dixon. “We really struggled out of [Turn] 7 and didn't have the speed down the back straight. I don't know if we were bottoming the car too much, especially on the reds, but he just drove on by us. Overtake [push-to-pass] wasn't even engaged at that point so he did a hell of a job.

“But we were able to salvage a fifth with a pretty beat-up cars. One of those days you definitely have to take as one hugely lucky day.”