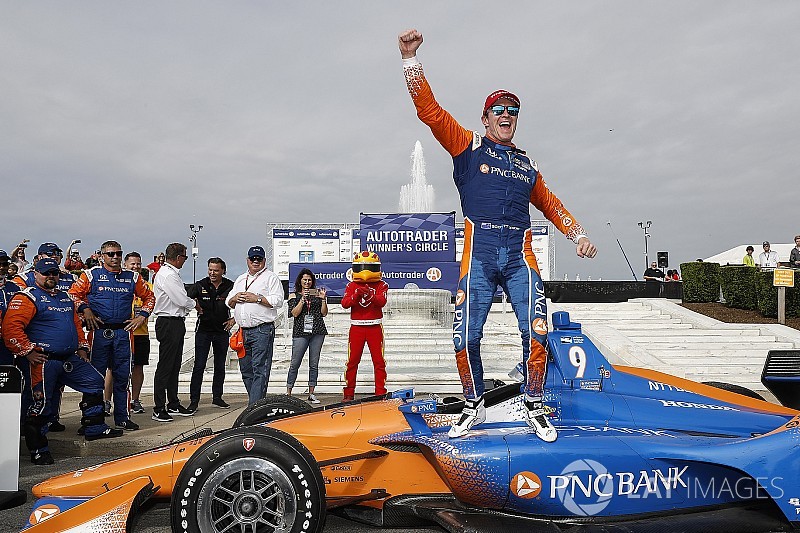 Scott Dixon, who drove a flawless race to victory in the first half of this weekend's Detroit double-header, paid tribute to HPD and also the fact that IndyCar Race Control didn’t immediately throw a yellow for a stranded car.

Dixon hit the front for the first time after stalking polesitter and early leader Marco Andretti in the first stint, by running a lap longer in the first stint. He delivered a strong in- and a strong out-lap, and combined with his #9 Chip Ganassi Racing crew’s traditionally swift pitstop, he emerged 4.5sec ahead of Andretti.

Once Graham Rahal, who’d been the only driver to start on the harder primary Firestones, and Ryan Hunter-Reay who was on a three-stop strategy, made their respectively first and second pit stops, Dixon took command.

When Rene Binder ran his Juncos Racing-Chevrolet down an escape road on Lap 44, Ganassi team manager Mike Hull called Dixon to the pit, in case of a full-course caution. A lap later, after Binder had failed to get his car turned around by himself, it seemed inevitable that IndyCar Race Control would be forced to call for a yellow, so Hunter-Reay was  called in too.

In fact, Race Control had given the opportunity for all to pit, and only finally threw the caution when Rahal shunted hard into the Turn 13 wall.

Said Dixon: “I think we almost extended [our lead] to over 15 seconds at one point, which is nice to have that buffer, but obviously on these street courses, that can change in an instant. For us, it was nice to have that buffer. It allowed us to actually pit early and not really stress about the undercut or people going longer actually on the overcut, extending that gap and trying to have a better in-lap.

“We actually caught traffic, so it worked into our favor to have that, and then that caution… actually it was the first time I had seen IndyCar kind of hold off on going full course [yellow]. There was a car in the runoff in 7 but actually allowing everybody to pit was nice. You didn't have the flipping strategy where sometimes the leaders are sitting ducks and get thrown to the back of the field.

“But for us, we were one of the first to pit just because we caught the traffic so it actually was in our favor anyway.”

Regarding his stalking of Andretti in the early stages, Dixon said: “Well, I was just kind of biding time. It was quite strange, Marco would run 79-second laps and then a 77 would come out of the blue. The pace was quite strange. Wasn't really sure what we were doing there. It was hard to get into a bit of a rhythm.

“We wanted to stay as close as possible just in case they pitted quite early. We knew they kind of had to get to lap 20 to make it work anyway, and then we started to pile on the pressure a little bit there to be close on that pit stop exchange. You know, in that process we were trying to save as much fuel as possible to make sure that whenever they did pit we could go a lap or two longer, and that's how it played out. As soon as [Andretti] peeled off, we used a ton of OT [overtake overboost] – good Honda power there – and threw in a big lap time. The pit stop was flawless, too, and we were able to jump him…”

Honda, which finished in the top six positions today, is now 3-4 in terms of wins this year compared with Chevrolet, and Dixon said the engine war between the two brands will swing back and forth according to the track layout.

“I think it's definitely been obvious that the Hondas have been strong here this weekend, which is good to see. I think they're working as hard as they can. The season and the parity is very close, but there can be some polar opposites as we go through some of these different tracks. It's quite interesting to see what you're always chasing with your competition. GM did a superb job, and they make it tough for all of us, and as you saw last week with [Will] Power's victory at the 500, nobody lays down. Everybody keeps pushing.

“Honda will keep pushing, GM and Chevrolet are going to keep doing the same, too, and that's what's been really healthy for our sport.”