Dixon: We’ve got nothing to lose now, we’ll just go for wins 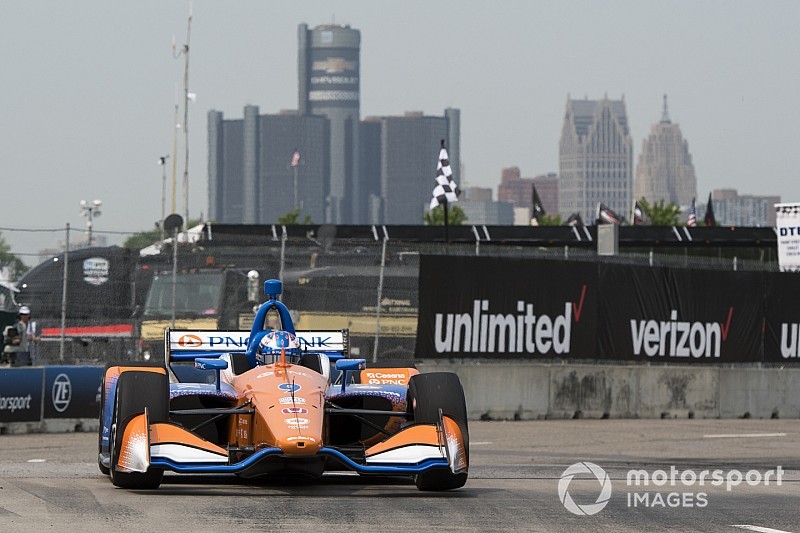 Scott Dixon says that the #9 Chip Ganassi Racing-Honda team has no other option but to just go for IndyCar race victories now that he has slipped 92 points off the championship lead in the opening race at Detroit.

Following a 17th-place finish in the Indianapolis 500, the five-time and defending NTT IndyCar Series champion was 22nd and last in today’s first race of the Chevrolet Detroit Grand Prix double-header, after crashing out of the race while running in the top three.

Dixon, whose last DNF came at Texas in 2017 but whose previous finish outside the Top 20 was Indy that same year, told Motorsport.com that he will be changing his philosophy from here on, and go flat out for wins.

“We’ve got nothing to lose now, right?” he said. “We’ll just be going for the win – and that’s not just tomorrow’s race here but all the races now. And that’s kind of fun – fun for the driver and fun strategy-wise for the guys in the team.

“We’ve had similar deficits before and we’ve clawed it back and got back in the championship hunt. Just got to do it again. There’s still 10 races to go.”

As a result of the 75-minute lightning storm delay, the race was shortened to a 75 minute timed race, and Dixon was lying third, close behind Newgarden and Rossi on Lap 24, when he clipped Turn 6’s inside wall with his right front tire bending a toelink and sending the PNC Bank orange-and-blue car nose first into the tire wall on the exit of the corner.

Dixon explained: “It was like the car turned in a bit better than I thought it was going to, just that little bit sharper, but even then I didn’t think it was going to hit.

"It really just nicked it, but once it broke the toelink the car just turned left and I was just straight into the tires. I really thought it was going to be OK, but when it went, that was it – I was just buried in those tires!”

Asked if he thought he had anything for Rossi and Newgarden, wet or dry, Dixon said: “I don’t know, man. Woulda coulda shoulda, right?

“I think we were better earlier in the run, and I think Josef got truly lucky with that yellow coming out just as he’s pitting. I think both Rossi and I would have cleared him in a normal pitstop sequence when we all switched to slicks.

“If we’d still been in at the end? I don’t know, to be honest: it’s hard when you’ve got a track where the racing line is dry but it’s wet offline. Where do you go to make an outbraking maneuver? It’s gonna be a pain.

“Plus with such a short race – which I don’t know why they bothered with because we still fell outside NBC’s [broadcast] window and went to CNBC, right? – it becomes a sprint, and you can’t get smart with strategy. Personally I think it should have gone full length – not that it would have made any difference to me, obviously!

“But you’ve got to hand it to those guys [on Newgarden’s #2 Penske]. They’ve found a way to turn average weekends into great results, and we’ve seen championship runs where a certain driver can do no wrong.”