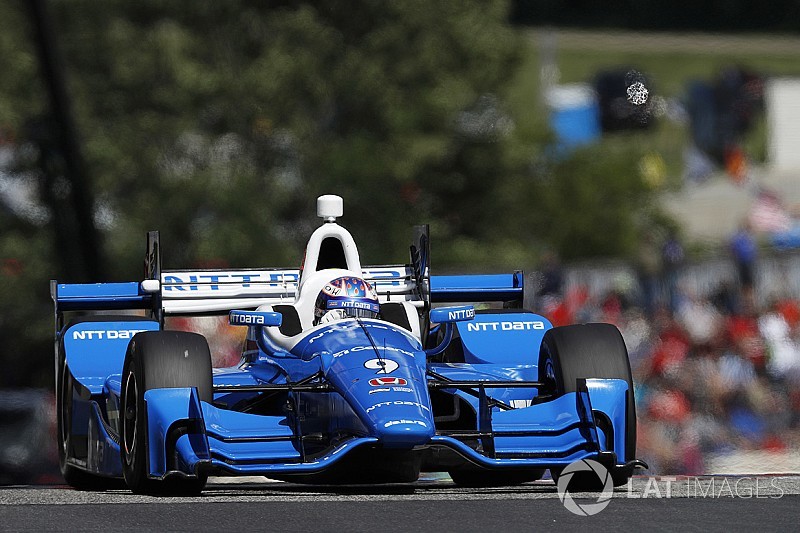 Scott Dixon says it was his Honda’s fuel mileage/horsepower combination that gave him the edge over the Penske-Chevrolets at Road America, and came despite a fuel-pump issue that threatened to ruin his day.

The four-time champion, who earned his 41st victory and moved to within one win of joining Michael Andretti in third place on the all-time Indy car winners’ list, admitted that he hadn’t expected to be able to beat the Penske-Chevrolet quartet. However, he believes the Penske cars were struggling to make fuel mileage, which helped ameliorate the basic issue that Honda’s aerokit creates more drag.

“I didn't really think we would be in this situation,” said Dixon, “but huge credit to Honda. The engine's very strong. They don't really have to turn it down for the race. To get the fuel mileage, as well, is always very difficult when you're making so much power.

“[The Penske-Chevys] were able to turn up to similar performance, I think, when they need to earlier in the race [but] we don't have to de-tune as much as they do. At the start of the race, I was kind of shocked how fast we were. Had a pretty big run on Will [Power] a couple of times, then Helio [Castroneves]. Honda have done a fantastic job to maintain that performance.

“[The Penske drivers] were, I think, having to save fuel pretty hard to get the mileage number with their engine. So I think that definitely helped us on that side of things. They couldn't run flat out like we could in some of the scenarios.”
Dixon said that the grunt of the Honda was also crucial in sealing his pass on race runner-up Newgarden following a restart, where push-to-pass boost is not allowed.

He said: “I think what contributed to that was the torque of the engine. Obviously in these lower gears out of the last corner that enabled us to get close to Josef, get in the draft, get beside him.

“We kind of petered out towards the end. You can't use overtake on the restarts, so we weren't able to clear the 2 car. But I knew it was going to get interesting. I knew out of most of the guys that you can race with, he's a guy that you can race with cleanly. It was one of those situations where we both gave each other room.”

Uncertainty before the start

Dixon explained that because of a fuel pump issue and his consequent inability to take part in the warm-up, he and race engineer Chris Simmons had been unable to verify optimal downforce settings.

“We had some issues last night with a couple of pieces in the fuel cell and we tried to repair those,” he explained. “Then it was for a different reason, but this morning we just couldn't get fuel pressure. The difficult part was that you can't replicate it inside the pits. It was third, fourth or fifth gear, where it was causing the starvation.

“We were trying to run the car at high rpm while dragging the brakes in the pits before the race to try to rectify the issue. It wasn't until the warmup lap we could really figure out they fixed the issue.”

Asked if Simmons had been forced to guess at setup to some extent, Dixon replied: “I don't think he took too much of a swing [although] he did his typical thing where he likes to trim the car out, and doesn't really tell me too much about it. That makes it pretty interesting for the first few laps!

“But he's been in the industry long enough, won a ton of races, especially with Dario [Franchitti] throughout those years. I have a huge amount of confidence in him and what he gives me.

“I think the hardest thing for us, we didn't know what the mixtures we were going to do. We didn't have the warmup to understand what trim level we needed to be. There was a little bit of… you know, not guesswork, but taking a bit of a leap of faith on some of the changes he did make for the race. They're always pretty educated. He made the right ones.”