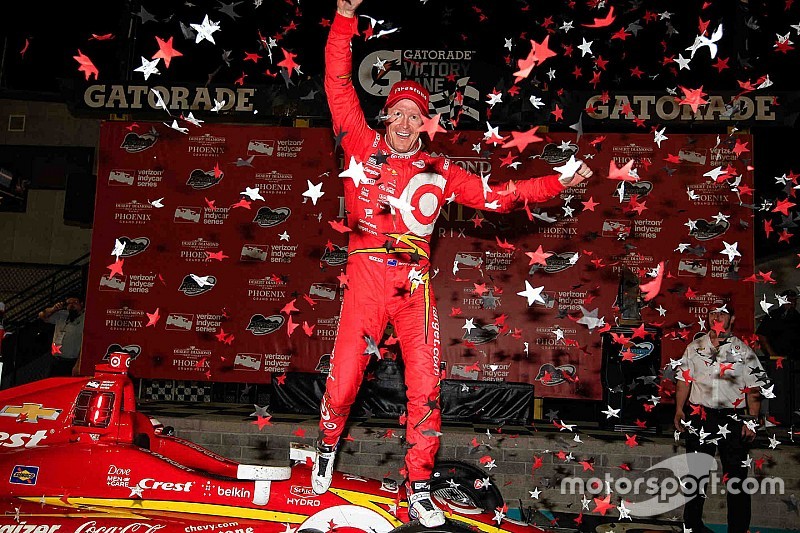 Reigning champion Scott Dixon and Chip Ganassi Racing were flawless on raceday at Phoenix, but punctures for two of his main rivals opened the door for the Kiwi.

The 39th win of his career has drawn the Kiwi level with Al Unser in fourth on the all-time IndyCar winner list, and he led 155 laps so it was by no means easy.

However, first Helio Castroneves and then Juan Montoya saw their Penske cars suffer right-front punctures on lap 39 and lap 95 respectively, both while leading. They never recovered from going a lap down, although smart strategy did get them back onto the lead lap.

Although it was Tony Kanaan who was Ganassi’s thorn in the side of the Penske cars in the first stint, Dixon’s crew got him out ahead of his Brazilian teammate, and so the champion was poised to pounce the moment Montoya suffered the puncture. He was never headed thereafter.

Dixon won under caution, as the last two laps went yellow when rookie Alexander Rossi struck the wall, understeering gently upward while he was dealing with a deflating right-front tire and trying to pass a backmarker.

Simon Pagenaud finished runner-up, as he did at St. Petersburg in the opening round, and he thus takes the lead of the championship.

The Frenchman lay in the lower reaches of the top 10 for most of the evening, but both he and teammate Will Power benefitted from superb work from their pit crews to move them up the order, on a night when it was difficult to pass. Finally Pagenaud vaulted past Power in his final stop and cruised to comfortable second.

Power meanwhile, in his first race since last August, stayed just far enough away from the car in front – first Dixon, then Pagenaud – to protect his tires.

He did, however, have to keep an eye on his mirrors, to hold off a resurgent Kanaan. After being delayed by one bad pit stop (slow on the right-rear) and then being wrongfooted by a yellow that fell just as the Brazilian pitted, TK was in determined mood.

Josef Newgarden in the Ed Carpenter Racing-Chevy tried to go with the flying Kanaan, but the American was closed out in a harsh manner. This may be seen as rough justice for a debatable collision Newgarden had with Charlie Kimball earlier in the night. The coming-together spun the Ganassi driver down to the apron, damaged Josef’s front wing, and brought out the third yellow of the race, just past half-distance – yet induced a penalty for Kimball.

Nonetheless, Newgarden – who had already surged from the back of the field after a pitstop went wrong when the fuel hose wouldn't deliver – also recovered from his late squeeze by Kanaan, passed Chilton and claimed sixth on an otherwise disappointing night for ECR.

Team owner Carpenter had been running in the top four when he looked at an inside pass on Will Power on Lap 196, backed out of it and then drifted up into the marbles and into the wall on the front straight.

Rahal was Honda’s top runner in fifth, and his was  a great drive, surging from 19th on the grid after his scrappy qualifying run. But props must also go to Ryan Hunter-Reay who passed cars on every restart in his Andretti Autosport-Honda.

But he was another one who suffered as a result of pitting when Carpenter caused the yellow. In fact, he had already suffered a similar setback under an earlier yellow. Finally, on lap 240, he grazed the rear end of the #28 on the wall after trying to pass Chilton. That cost him an element of his rear wing and also dropped him from eighth to 10th.

Chilton was top rookie with seventh place, Bourdais recovered from a brush with the wall just past half-distance to claim eighth and Montoya was classified ninth.

Aside from his lap 247 incident, Rossi drove a composed race, and was as high as seventh until penalized for entering a closed pits for his final stop. Even before that "illegal" pit stop, he had been running a legitimate ninth. He was classified 14th, just behind teammate Marco Andretti who was surprisingly never a factor.

The fourth Andretti Autosport car of Carlos Munoz made contact with the wall on the front straight soon after stopping for tires on lap 120.