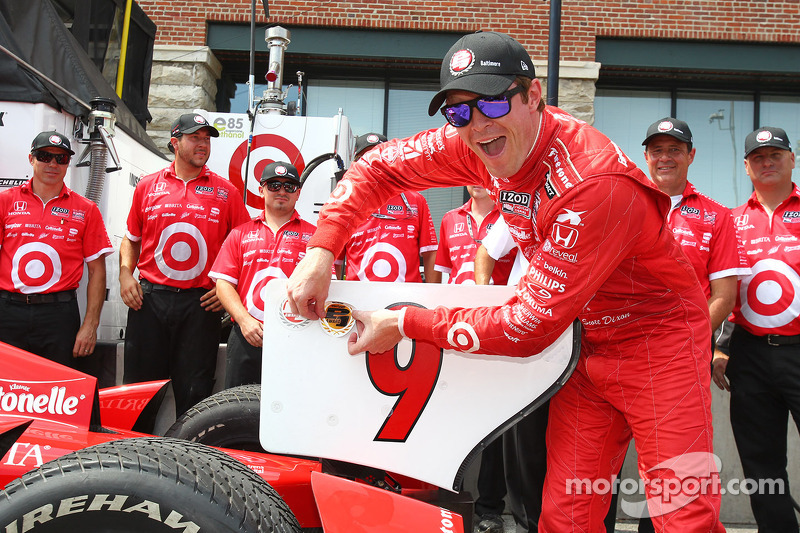 Ganassi Racing's Scott Dixon won the Verizon P1 Award, and now is tied with Gordon Johncock for 14th on the all-time pole-winning list.

BALTIMORE (Saturday, Aug. 31, 2013) - The six competitors in the Firestone Fast Six for the Grand Prix of Baltimore presented by SRT had a combined 50 IZOD IndyCar Series pole starts -- all by Scott Dixon (19) and Will Power (31) -- which made them targets for four others seeking their maiden Verizon P1 Award.

Through the 10-minute session, though, it was Dixon who earned the award by blitzing the 2.04-mile, 12-turn street circuit in 1 minute, 18.0838 seconds on his final lap. Dixon broke a tie with Danny Sullivan and is tied with Gordon Johncock for 14th on the all-time pole-winning list.

Dixon picked up one bonus point for his second pole of the season and enters the 75-lap race 38 points behind championship front-runner Helio Castroneves, who qualified seventh in the No. 3 PPG Team Penske car.

Dixon recorded the fastest lap of the weekend in Group 1 of Round 1 of qualifications (1:17.9275), which bettered the 2012 pole time laid down by Will Power. Power was .0333 of a second behind Dixon in the Firestone Fast Six and will make his sixth front-row start of the season in the No. 12 Verizon Team Penske car.

Simon Pagenaud, who is coming off consecutive top-five finishes, will start a season-high third in the No. 77 Schmidt Hamilton HP Motorsports car. Justin Wilson (fourth) and Josef Newgarden (fifth) also had season-best qualifying efforts. Tristan Vautier, who won the Firestone Indy Lights race at Baltimore in 2012, qualified sixth as drivers from five teams made up the Firestone Fast Six.

Jack Hawksworth recorded a best lap of 1 minute, 24.9617 seconds to claim his second Sunoco Pole Award and sixth front-row start of the season for the Firestone Indy Lights Grand Prix of Baltimore.

Hawksworth, driving the No. 77 Schmidt Hamilton with Curb-Agajanian car, has won two of the three street course races this season.

Series championship points leader Carlos Munoz qualified second for the 35-lap race with a lap of 1:24.9924 in the No. 26 Dialy-Ser Andretti Autosport car. It's his eighth front-row start of the season and 12th in a row in the top five.

Pagenaud & Vautier to start up front at Grand Prix of Baltimore