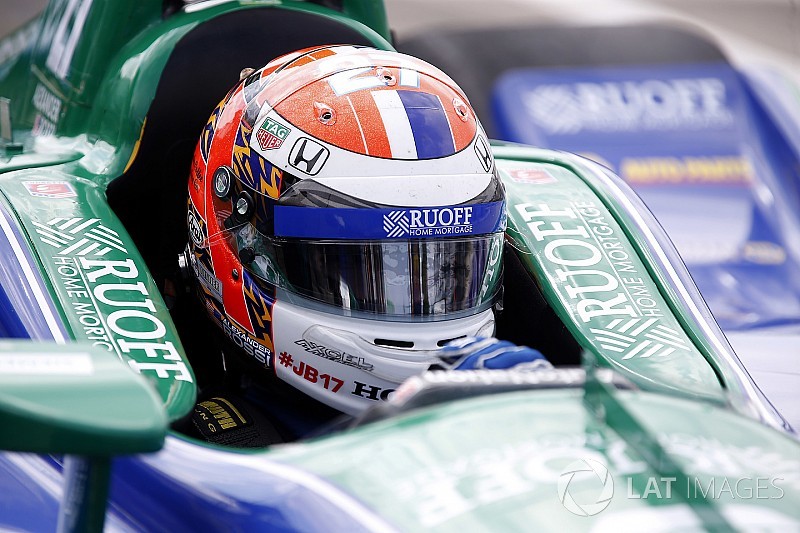 The anomalous Detroit GP qualifying system has the field split in half, each group getting 12mins, with the faster group lining up 1-3-5-7- etc. the slower group on 2-4-6-8- etc. Group 2 from qualifying yesterday was the first half of the field to get 12mins on track today this morning.

Tony Kanaan spun almost immediately, bringing out the red flag and requiring a new nose-wing. The field got the green flag again with seven minutes remaining, and Wickens took full advantage of a clear track to go quickest initially.

As the field separated themselves out, the Schmidt Peterson Motorsports-Honda nailed a 1min33.6605sec, beating the ever-smooth Ed Jones in the Chip Ganassi Racing-Honda by a quarter second, with the second SPM car of James Hinchcliffe a further two-tenths behind.

Team Penske-Chevrolet’s Simon Pagenaud was fourth quickest, but Ryan Hunter-Reay and Sebastien Bourdais hurt their chances by having a spin and a trip down an escape road respectively.

In Group 2, Max Chilton was the first to spin, but he kept his Carlin Racing-Chevrolet running and was able to continue. Rossi was the first to lay down a serious time and his 1min33.3143 ensured this second group would start from the odd-numbered side of the grid, and gave Rossi his third career pole position.

Will Power had just got up to second place to ensure he would again be the fastest Chevrolet by clocking second – albeit half a second off Rossi – when his teammate Josef Newgarden brought the session to a halt by understeering into the tire wall at Turn 11.

Newgarden, who wasn’t very quick anyway, nonetheless lost his two best laps and will start the race from 19th.

Yesterday’s masterful winner Scott Dixon will start fifth after bagging P3 in Group 2, while Zach Veach put in his best qualifying performance of the year to outpace Graham Rahal by a tenth of a second to grab seventh.

Grid order at bottom of page. Should the race be dry, all drivers will start on the alternate (red-sidewalled, softer) Firestone compound, except AJ Foyt Racing's rookie Matheus Leist who has chosen to start on primary tires.

Thus the grid order will be: