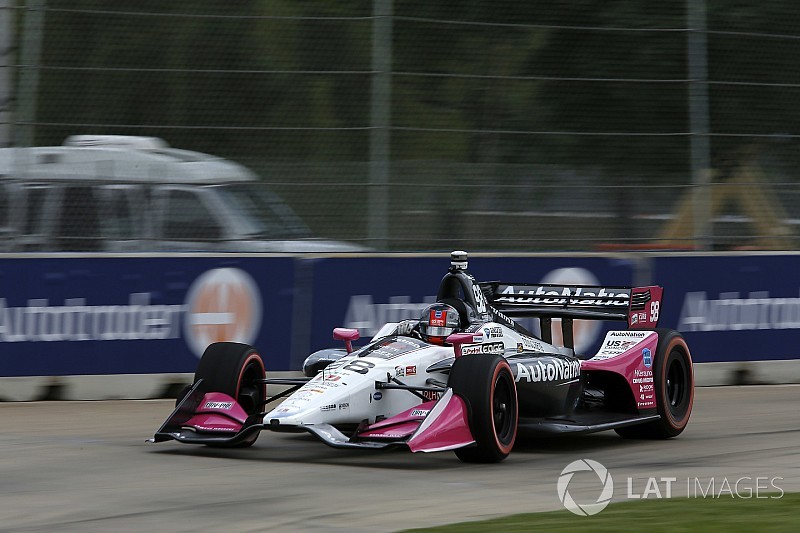 Marco Andretti took his first pole position in almost five years, when he emerged from Group 2 of qualifying with a time almost half a second quicker than his closest opposition.

Said Andretti: “I’m definitely embarrassed to say this is my first [road/street course pole]… Extremely pleased to execute today. Yesterday I knew we had the speed… so I knew we had it in the car. All I had to do was execute, and I was able to do that instead of just talking, ‘Oh we would have been first.’ Now we are.”

The qualifying system for Detroit double header has the field split in half, each group getting 12mins, with the faster group lining up 1-3-5-7- etc. the slower group on 2-4-6-8- etc.  Thus Andretti will be joined on the front row by Scott Dixon of Chip Ganassi Racing-Honda, who topped Group 1 with a 1min 15.4186sec lap, just 0.076sec ahead of Alexander Rossi.

Thanks to being third fastest in that first group, Will Power will roll off sixth fastest, fastest Penske driver and also fastest Chevrolet-powered driver.  After setting the fastest time of the group on primary compound, the Indy 500 winner then hit traffic while his alternate ‘reds’ were at their peak, and his 1min15.7210 was never going to be enough to stave off Dixon and Rossi

The first race begins today at 3.45pm local (Eastern) time. Grid order at the bottom of this page.

Thus the grid order will be:

How Power won Indy, by the man who knows him best