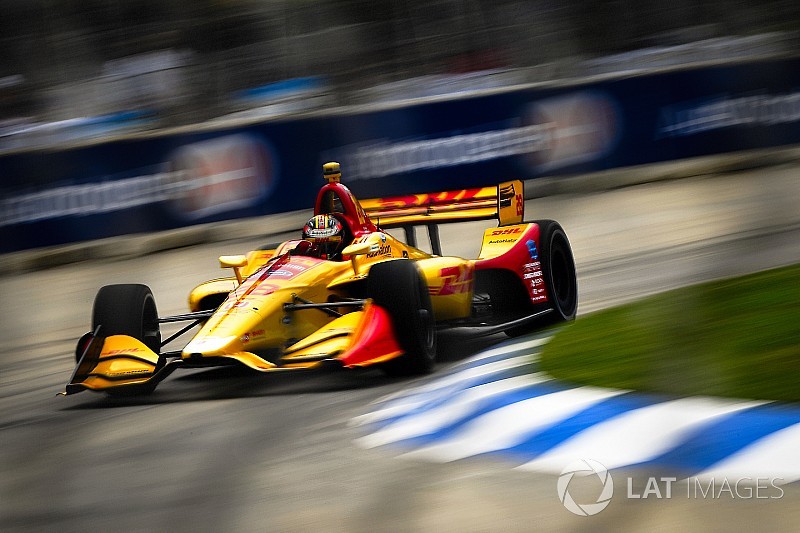 There was a bizarre incident on the parade lap when Mark Reuss, Executive VP of global product development at General Motors, lost control of the Chevrolet Corvette Pace Car exiting Turn 2, and shunted into the left-side wall.

The field was halted, then the cars were refired by the AMR Safety Team, and sent back to the pit road and the teams were allowed to recheck their tires to check for debris damage.

Once the serious action started, Rossi held on well ahead of Robert Wickens, but Penske’s Will Power worked hard to retain his third place spot as Ganassi’s Ed Jones tried to pass him around the outside of right-handed Turn 1.

They stayed side-by-side around left-handed Turn 2, all the way down the long straight to Turn 3 – with James Hinchcliffe’s SPM car on their outside – and then along the short straight to Turn 4.

Jones finally conceded, Hinchcliffe backed off, and third was Power’s. Jones too, lost momentum and fell back to sixth, behind teammate Scott Dixon and Hinchcliffe.

Further back there was a collision: Sebastien Bourdais collected a rear-left puncture, and Spencer Pigot spun to a halt and stall, believing he was punted by Coyne’s other car, Santino Ferrucci. Out came the full-course caution.

Rossi got a clean and easy restart ahead of Wickens, Power, Dixon, Hinchcliffe, Jones, Graham Rahal, Zach Veach, Marco Andretti and Simon Pagenaud. On Lap 5, Pagenaud was displaced by a brave maneuver at Turn 1 from Hunter-Reay. Two laps later, Andretti pulled a similarly bold pass on Veach to grab eighth.

Hinchcliffe and Hunter-Reay pitted on lap 10, a lap after Tony Kanaan (AJ Foyt Racing) and Takuma Sato (RLLR) had done the same.

On Lap 12, Wickens ducked into the pits, leaving Rossi with a 6.3sec lead over Power, and on lap 13 Jones got around team leader Dixon to grab third and start gaining on Power.

Rossi was starting to feel his front starting to give out, and was told that he needed to try and get 10 more laps out of the alternates he started on, the team having clearly decided on making this a two-stop race for the polesitter and leader.

Bourdais, who was now on primary ‘black’ tires since his enforced pitstop, passed Matheus Leist – the only driver to start on blacks – to grab seventh on Lap 16, and move in on the Dixon/Rahal battle for fourth. Just a little further back, Ferrucci passed Andretti for eighth.

Dixon stopped on Lap 20, and Rahal on 21, while Rossi, Power, Jones and Bourdais pulled in on Lap 22. They were lucky to get there without the track going full course caution, as Ferrucci spun his Dale Coyne Racing-Honda exiting the pits, nudging the curb and damaging his front wing. He spun back around and got going unaided.

The three-stoppers were now temporarily in control, Wickens and Hunter-Reay now leading by 6sec ahead of Rossi, with Kanaan and Simon Pagenaud ahead of Power, Jones, Bourdais, Dixon and Veach.

Wickens finally pulled out of the lead and into the pits on Lap 29, Kanaan stopped on 30, Pagenaud on 31, and Hunter-Reay on 34 after setting fastest laps of the race.

He wasn’t only going to jump Wickens (who was now running eighth), he was going to be right back in the thick of the battle for P2-P8. In fact, he beat Rahal, and he and all the cars ahead had just one more stop to make.

That left Rossi in the lead over Power by 14sec, with Jones in third 2.5sec behind. Behind the top three, Bourdais was 1.5 behind Jones, and only half a second ahead of Dixon who was about to find Hunter-Reay filling his mirrors.

Starting lap 38, just after Dixon had passed him for fifth, Bourdais’ Coyne car spun into Turn 1 with a suspected broken left-rear toe-link in the rear suspension, thankfully without getting collected by Hunter-Reay and Rahal.

Power was having fun at this stage, carving into Rossi’s lead without touching his overtake overboost, and by lap 42 he had the margin under 9sec, but the impressive part was that Jones was able to keep pace with Power, as Dixon tried to inch still closer.

Rossi, Power and Dixon peeled into the pits on Lap 46, but Dixon was slightly held up by Rahal also stopping in the pitbox just ahead. He rejoined still behind Jones, although the pair were now 6sec behind Power.

Rossi and Power had been only 5.1sec apart by the time they hit pitlane, and they rejoined the track in second and third – behind Hunter-Reay – but Rossi quickly shook off Power’s threat.

By the time Hunter-Reay pulled in for his third and final stop, Rossi’s margin over Power was out to 10sec, and a 6.3sec final stop from the #28 Andretti Autosport team ensured Hunter-Reay rejoined 4sec clear of the Penske driver to complete an Andretti 1-2.

Rossi aware of his fresh-tired and charging teammate, set his fastest lap of the race on Lap 55, a 1min16.0, but Hunter-Reay turned in a 15.8, to get the gap under eight seconds, and Power was a similar margin behind Hunter-Reay, and around 2sec clear of the Jones/Dixon Ganassi tandem.

On Lap 63, Rossi locked up his left-front under braking for Turn 3, and both were leaning on the push-to-pass boost. Finally on Lap 64, Hunter-Reay made Rossi crack, the #27 AA machine skidding down the escape road with both fronts locked up.

He rejoined the track just behind Dixon, but the front-left deflated and he had to limp to the pitlane.

Power was now 16sec behind Hunter-Reay and keeping Jones 2sec behind with a huge surfeit of push-to-pass. Rossi rejoined a dispiriting 13th.

Hunter-Reay was able to patiently pick his way through traffic given that Power was now 15sec behind, and he finally crossed the line 11.3549sec ahead of Power to score his first win since August 2015.

Dixon could not quite separate teammate Jones from his second podium of the year, but did enough to stay well clear of Rahal.

Wickens was a further 18sec down in sixth, ahead of Kanaan, who rose from the last row of the grid. Charlie Kimball did a remarkable job for Carlin to take eighth and beat Andretti and Pagenaud.

Rossi made up one place after his error to finish 12th, behind Max Chilton in the second Carlin-Chevrolet.