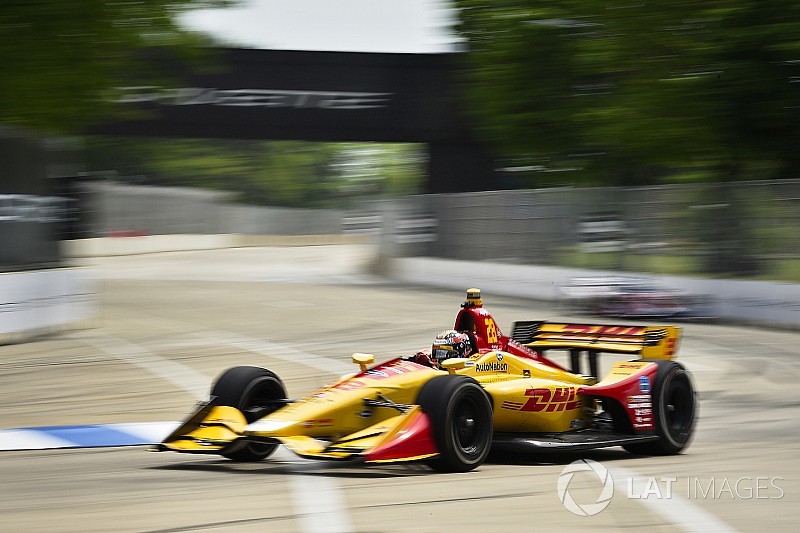 Ryan Hunter-Reay put Andretti Autosport and Honda on top in the last practice before tomorrow morning’s qualifying for the first race around Belle Isle, but Jordan King crunched his Ed Carpenter Racing-Chevrolet hard into the Turn 11 wall.

As all the drivers got a chance to try the extra grip provided by Firestone’s alternate compound red-sidewalled tires, Hunter-Reay worked down to a 1min16.3598sec laptime of the 2.35-mile course, a mre 0.0069sec faster than Scott Dixon in the Chip Ganassi Racing-Honda.

Pagenaud was seventh, a couple of tenths off teammate Josef Newgarden, but 0.08sec ahead of his other teammate Will Power. The #12 driver appeared to add the Belle Isle paddock to his post-Indy 500 tour, after getting it wrong in Turn 7 but carrying on down the escape road, driving past parked semis to rejoin the course at Turn 11. He finished the session in 12th.

Other drivers had moments, including Hinchcliffe and Sebastien Bourdais, and Tony Kanaan brought out a red flag by slamming into the Turn 3 tires, thankfully at slow speed. But the other red flag was for King who hit a bump on turn-in for Turn 11, the rebound sending him off line and into the concrete barrier, slamming both left wheels hard into the wall, buckling his suspension. Without accurate steering, the ECR car was then spat across the road to mess up its right side, too.

How Power won Indy, by the man who knows him best