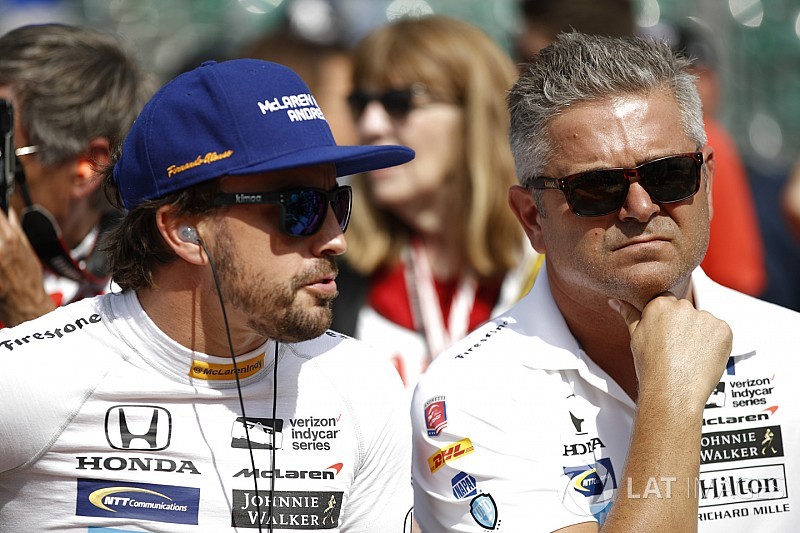 Ex-Champ Car champion Gil de Ferran is undertaking an advisory role with the McLaren team that covers both Formula 1 and a potential IndyCar project.

De Ferran was drafted in to advise Fernando Alonso over the course of his Indy 500 programme last year and, after attending this year's Bahrain GP, the Brazilian agreed a new role with McLaren that meant he worked with the team in Barcelona and again this weekend in Monaco.

McLaren has admitted that it is considering a return to IndyCar racing, and given his experience, de Ferran could have a useful involvement if that project gathers momentum.

"Gil is a good friend of McLaren," said McLaren boss Zak Brown. "We have brought him on as an advisor to help with our young drivers.

"We are looking at some other forms of motorsport, most notably IndyCar is under review, and he obviously has great history there.

"He's a great racer who knows his way around the garage, so much expertise he has that can help us improve and we're open-minded to that. You'll be seeing him in Detroit for the IndyCar race and around our Formula 1 garage often."

Alonso said he had no involvement in de Ferran's hiring, but is happy to have him on board.

"I wasn't involved at all, I was just informed about his presence here," he said.

"Zak was calling me a couple of weeks ago to inform about this Gil position, of helping the team to maximise the performance and the resources and everything that he could tell us from an outside point of view.

"I'm happy, I know him from the IndyCar experience, and it's good to have him here with maybe a fresh approach or different point of view of some of the things that we are doing here. He's a great guy.

"At the moment he's just listening, more than talking, and trying to understand how the team does everything, and how the philosophy of the McLaren F1 team is at the moment. His contribution is maybe later on, or in a couple of months' time."

Teammate Stoffel Vandoorne was equally supportive of the move.

"Gil is obviously a very experienced guy," he said. "He has a lot of experience in racing in general, in F1 and IndyCar.

"He's fairly new to our team but it's positive to have someone new on board and to have a bit of a fresh influence in an advisory role.

"I see it as a positive and I first started working with him now in Barcelona. This will now be the second weekend so we're looking to build on that."

Next-gen IndyCar will not be an FE-style ‘Batmobile’

Teams can still use “creative” strategies at Texas, say drivers