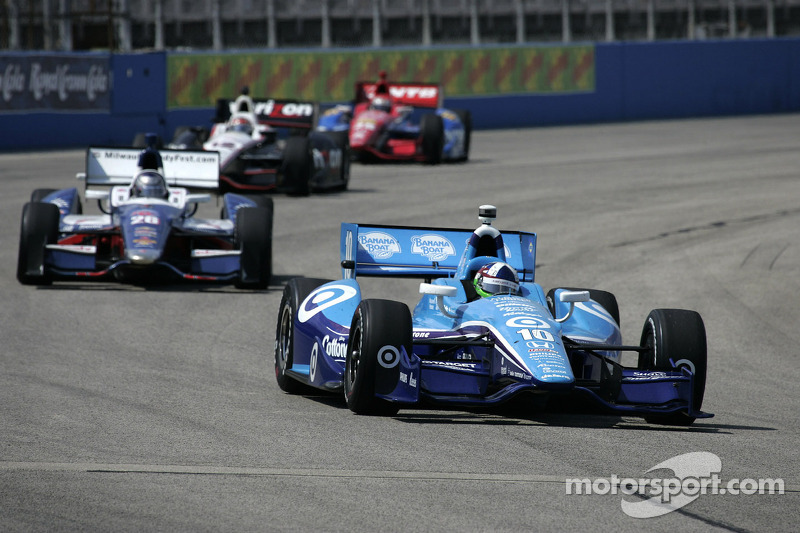 By Eric Mauk: Dario Franchitti jumped into tonight’s final heat for tomorrow’s Iowa Indy Car 250 on his last lap of practice, but he didn’t wait nearly as long in the heat race

Dario Franchitti jumped into tonight’s final heat for tomorrow’s Iowa Indy Car 250 on his last lap of practice, but he didn’t wait nearly as long to make his move in the heat race as he roared away to a win that put him on the pole for Saturday’s IZOD Indy Car Series race.

Franchitti passed polesitter Marco Andretti on the eighth lap of the 30-lap event to take the lead and was never headed, beating Helio Castroneves to the flag by 1.4 seconds.

“That was good, that was a nice surprise, because we struggled in race trim this morning, but I saw TK run the high side in his heat and I used it to get around Marco and it stuck,” Franchitti said. “We had a broken suspension in Milwaukee and there isn’t much you can do about that, but we know that if we run well, the championship will take care of itself, so that is what we are focused on.”

Castroneves earned his spot on the outside of the front row by passing Andretti on the 16th trip around the .875-mile Iowa Speedway oval, taking the second position in the heat – which gave him a front-row starting spot.

That was good, that was a nice surprise, because we struggled in race trim this morning

Andretti ended up in the third spot, just ahead of a fierce battle between James Hinchcliffe and Ryan Briscoe. Easily the best fight of the three heat races, Hinchcliffe fended off three strong strikes from Briscoe, including one of the last lap that resulted in some light contact between the two cars.

“Ryan got a bunch of different runs on me but it is so hard to hold the bottom of the track and our car was good on the high line so we were able to hold him off,” Hinchcliffe said. “I have a lot of respect for Ryan, and tomorrow we will start pretty close so we’ll get to do it again tomorrow.”

Will Power will start sixth, with Ryan Hunter-Reay and Scott Dixon making up the fourth row after finishing seventh and eighth respectively in the final heat. There are five drivers that will serve 10-spot penalties for unapproved engine changes, including Friday heat winners Graham Rahal and Tony Kanaan.