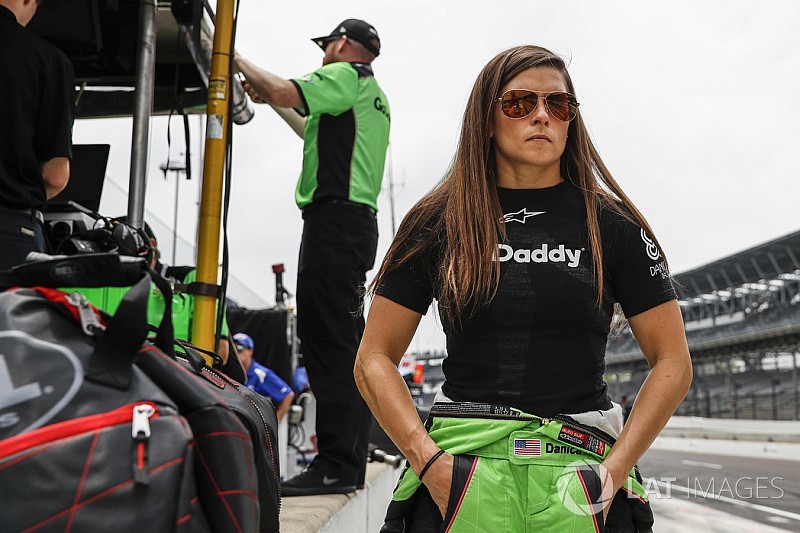 Danica Patrick says she does not understand what caused her to crash out of the 2018 Indianapolis 500, her final career race.

Patrick’s planned 2018 swansong began in the NASCAR Cup series season-opening Daytona 500 with Premium Motorsports, but she was collected in a pile-up during the race.

Having admitted her Daytona deal was last-minute, she took in the whole Month of May with Ed Carpenter Racing and improved through the month to qualify seventh for the race.

She dropped down the field to just outside the top 10 early in the running and she admitted the car was tough to drive.

Patrick then spun into the outside wall of Turn 2 on lap 68 of 200, having dropped her left-front tire over the white line at the bottom of the track, but said she was at a loss to explain the crash.

“I’m not really sure what happened,” she said. “It just seemed to come around. It seemed pretty late off the corner.

“They [ECR] said they looked back at the data and there was a little lift in the middle, a little understeer and back to it and [it] just swung. I do feel like it was pretty unexpected. But, on the other hand, the car was a little bit positive today and was turning a bit more than I wanted it to, so just having to chase it a lot.

“Turn 2 did seem a little bit more edgy than some of the other corners. I can’t say that at that point in time I was on edge of felt like I was. It swung around as soon as I recommitted back to the throttle for a little bit of understeer in the corner. I wasn’t expecting it by any means.

“I think it just goes to show that these IndyCars are tough to drive.”

Patrick said that it was not the ending she wanted to her career.

[It was] definitely not a great ending, but I kind of said before I came here that I feel like if it's a complete disaster – 'complete' like as in not in the ballpark at all, look silly – then people might remember that.

“If I win, people will remember that. But probably anything in between might just be a little part of a big story. So, I kind of feel like that's how it is.”

She added that the Indy 500 had helped make her 14-year career.

“It’s an entire career, but what really launched it is this. I’ve had a lot of good fortune here and still had some this month. It just didn’t come on race day.”