St. Petersburg, Florida (March 25, 2012) – Justin Wilson’s return to Dale Coyne Racing was an impressive one as he drove his No. 18 Sonny’s BBQ Honda car to a 10th place finish in Sunday’s IndyCar season opener in St. Petersburg, FL. 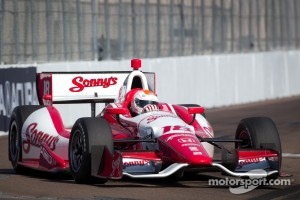 Wilson started the day in 16th position, and was running as high as third place, when his car ran out of fuel waiting for the pits to open during the first yellow of the day. He entered pit lane a lap later when the pits finally opened. This caused the 33-year old Brit to slip back to 20th position for the restart after narrowly beating the pace car out of pit lane and was able to remain on the lead lap. With two fast pit stops and some great driving, Wilson managed to work his way back up through the field on his way to posting the second quickest lap of the race and gaining three positions in the last five laps of the race.

“Although 10th place isn’t quite the result we were looking for it still was a good start to the season,” said Wilson. “Unfortunately, we ran out of fuel in the pits before I could get to the box. We managed to keep it on thelead lap and I caught half a lap up while they were still behind the pace car. We had to do the other half under green, but we managed to set some quick times and passed a few people and I think we showed a lot of potential. We’ve learned a lot this weekend, so we’ll keep moving forward and hopefully get the Sonny’s car on the podium at Barber. The whole #18 Sonny’s BBQ Honda team did a good job today.”

Wilson’s teammate James Jakes day ended sooner than he would have liked it too. Shortly after pitting during a caution, Jakes brakes glazed over going into turn 10, which sent him into the tire barriers, damaging his front wing and a 26th-place finish in the IndyCar season opener.

“We had a good car today,” said James Jakes. "It wasn’t the start to the season that the #19 Boy Scouts of America Honda team was looking for. I’m not really sure what happened, but my brakes seemed to glaze over on me going into turn 10 and I couldn’t make the turn, which left me no where to go, but into the tire barriers. I am looking forward to shaking this weekend off and running at Barber Motorsports Park next weekend. Hopefully we can bring home a top 10 finish.”

Jakes returns for a second season with Dale Coyne Racingdriving the #19 Boy Scouts of America Honda.

The IzodIndyCar Series next heads to Birmingham, AL on Sunday, April 1 for the running of the Honda Grand Prix of Alabama on the 17-turn 2.38-mile Barber motorsports Park circuit. The race can be seen live on NBC Sports Network starting at 2:00 p.m.(EDT).